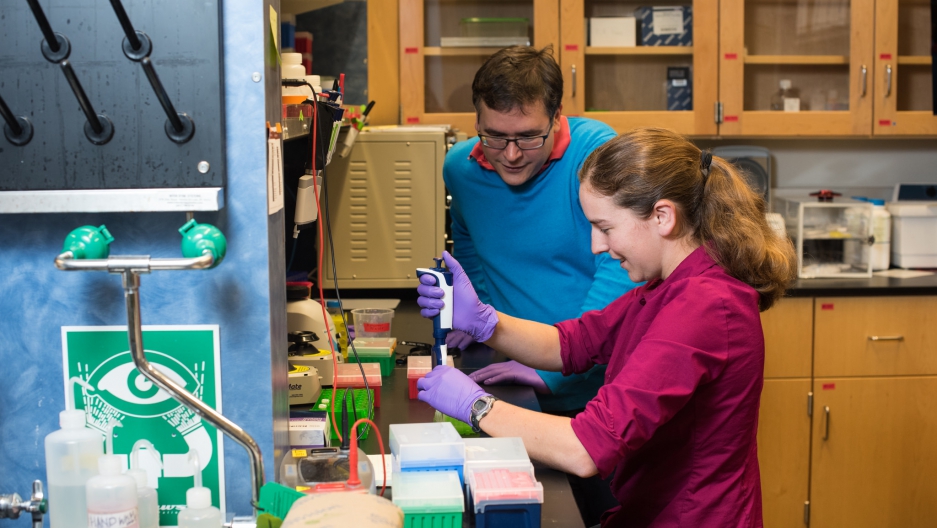 Digital data is usually stored on CDs, hard drives or massive servers. This storage takes up a lot of space, it's expensive and it isn’t very durable.

The hunt has been underway to find a new way to store digital information and recently there was a breakthrough in storing and receiving information on the same medium that stores the biological code of the human genome: DNA.

Georg Seelig, an engineer from the University of Washington, and his team were recently successful in storing and retrieving digitized photos on strands of DNA. And that could be a huge breakthrough because of all the qualities DNA has.

“It's really small, it's really dense — you can just get a lot of information into a very small space,” Seelig says. “It lasts for a long time — I mean we can retrieve DNA from very old, hundred-thousand-year-old fossils. And DNA is sort of our genetic material, and so we'll always be interested in reading DNA. It's not like a floppy disk that 10 years from now nobody will be able to look up.”

In Seelig’s recent success with DNA storage, he and his team were able to store 150 kilobytes — a handful of simple emails — on a strand of DNA. But Seelig thinks the capability to store information on DNA will improve rapidly, to the point where we will eventually be able to store exabytes of information in a space the size of a sugar cube.

“I think eventually that will happen,” Seelig says. “I think that the potential is there. ... The key thing that needs to happen to get there is that you need to make writing DNA — so DNA synthesis — much, much cheaper. Like a million times cheaper. And, you know, there's a lot of questions as to how to do that, but I think it can be done and if we do it then, you know, this becomes realistic.”

Seelig sees the potential for this technology to become available to consumers in the future.