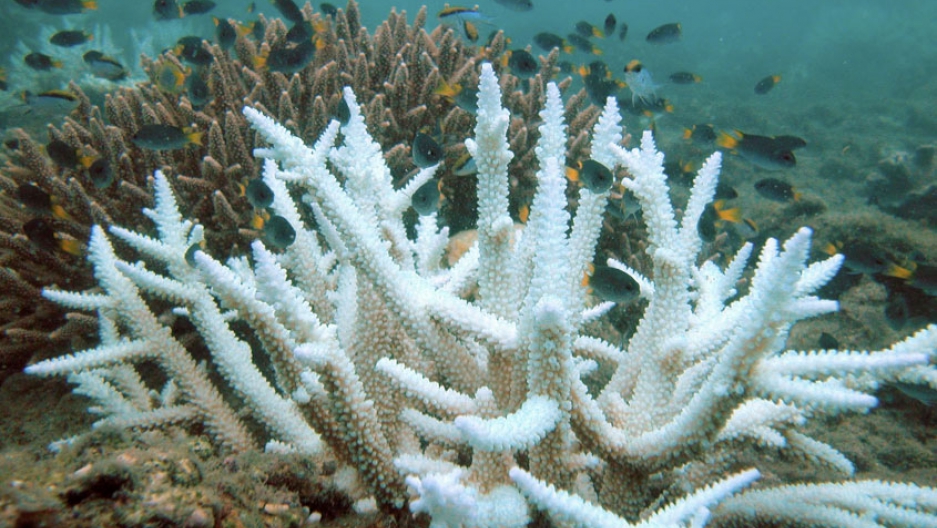 Bleached coral in the Great Barrier Reef. From Wikipedia/CC BY 3.0

When the watery home of coral gets too warm, the coral expel the microorganisms that live inside and turn white.

These bleached coral aren't dead, but their growth slows tremendously, and they can cease to become the tremendous natural habitats they usually are.

The Great Barrier Reef has recently been hit by a large-scale bleaching event; 93 percent of the corals in the area have been affected, according to a survey by Australia’s National Coral Bleaching Taskforce. But the problem goes beyond Australia.

“We're actually in a global bleaching event that started in June of 2014,” says Mark Eakin, coordinator of the NOAA Coral Reef Watch program.

The current bleaching has been compounded by both global warming and the huge El Niño currently underway.

“[But] we've been going at this for almost two years now, long before this El Niño started," Eakin says. "We’ve seen the warming go on in places across the Pacific and then across into the Indian Ocean and the Caribbean. ... This huge amount of high temperature the corals are seeing right now across half of the southern hemisphere — from Africa to French Polynesia.”

Eakin says the warm waters that are bleaching corals will not end with the current El Niño.

“It's not just nine more months. It's at least nine more months, I'm afraid,” Eakin says. “We're likely to have major bleaching going on in the Caribbean as well as other areas in the Northern Hemisphere and this event we're in now may even bleed back over into the southern hemisphere in early 2017, so we're looking at an event that's going to be going for at least two and a half years, probably a bit longer.”

With massive amounts of coral bleaching in our oceans, there is a team of scientists working to renew and re-seed coral plants. David Vaughan from the Coral Restoration program at the Mote Tropical Research Laboratory says reef seeding may help bring back coral to some areas.

“We're using the naturally resistant [coral] strains that are here today,” Vaughan says. “We have an ocean acidification and a high temperature simulator system — sort of an ocean pre-testing system here at the lab. So we can actually test the conditions that we think these corals might be in in 50 or 100 years from now and see which one of these strains ... are naturally resistant to the future conditions.”

Vaughan and his team have discovered ways to help coral grow faster than usual by breaking them into tiny pieces and planting them close to each other. One of these innovations was discovered accidentally when Vaughan broke a piece of coral into a smaller bit than he'd intended.

“I think someone called it my 'eureka mistake,'” Vaughan says, “We found out the smaller the size of the piece, the faster it grows, and of course then the higher the number of pieces that we get. So a piece of coral that may have started off as a silver dollar as a small brain coral, we would wait one or two years until it got big enough that we would break it into two pieces and then it would take another two years. Now we take that same size coral, break it into 25 to 100 very tiny pieces … and those seem to grow ... 25 to 40 percent faster. And so we not only get thousands of corals now in a short period of time, but they continue to grow very fast for about a year or two, just like your skin may grow fast after it's been broken.”

Vaughan and his team have been working on building coral systems in the Florida Keys, but he has much bigger goals. Eakin warns it’s going to take an enormous, concerted effort to protect the coral in our seas.

“We've probably planted over 10,000 corals in the Florida Keys. But that is just the beginning,” Vaughan says. “In my calculations we could literally have hundreds of thousands in one to two years. And my personal goal is to plant one million corals back in the ocean before I retire.”