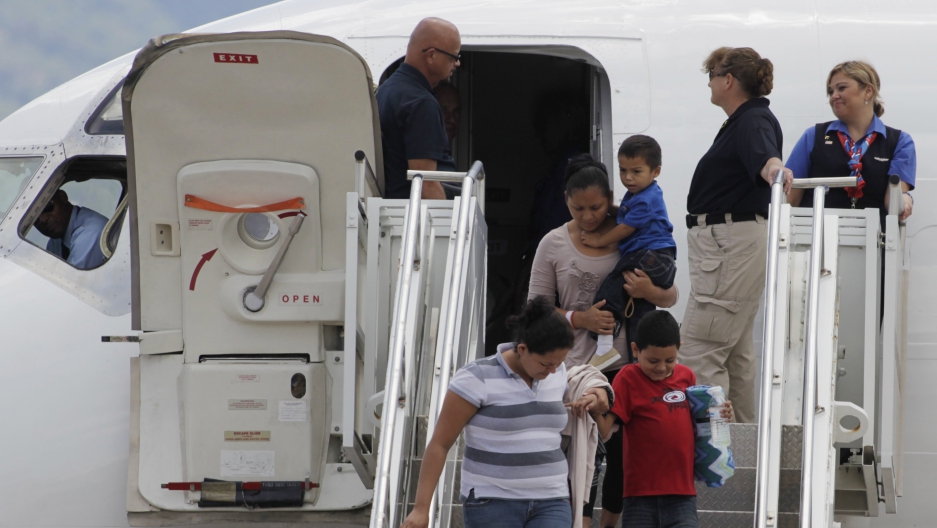 Women hold their children while disembarking from a plane at the Soto Cano military base in Comayagua, Honduras, on August 11, 2014. The plane carrying 11 women and 14 children landed at the base after they had been deported from the US. Tens of thousands of women and children crossed the border that summer.

When federal agents conducted high-profile raids against undocumented immigrants in January, Laura López and other Mormons in her neighborhood got busy.

She’s part of a group of people in and around Salt Lake City called Together Without Borders. They formed to raise awareness within the Church of Jesus Christ of Latter-day Saints about their undocumented members and work for immigration reform.

The raids, though, struck a new nerve. The church, better known as the Mormons, has long been known for its ability to network and mobilize its members and for its preparedness. López and Together Without Borders decided to do the same. They created a phone tree to help undocumented neighbors — Mormons or not — alert each other to the presence of federal agents in their neighborhoods.

Reuters reported Thursday that federal agents have been instructed to conduct a “surge” of arrests of mothers and children from Central America who entered the US illegally after 2014, according to unnamed sources and internal documents from the US Immigration and Customs Enforcement. An ICE spokesperson didn’t confirm the raids, but said that recent undocumented arrivals from Central America are priorities for removal.

In January, the Obama administration conducted a similar campaign to remove undocumented migrants from Central America, many of whom fled violence in their home countries.

“[We were] told that this is just for Central American families, but we don’t know if this is what is happening, ” López says. She lives in a largely white neighborhood in Provo, just outside Salt Lake City. “We stand out a lot.”

The phone tree works like this: There is one number to call if a someone thinks they are being targeted by ICE. The call goes via Google to the phones of six volunteers. Whoever answers does basic intake; they get contact information from the caller and information about what is happening. Then they send text messages to 10 to 15 more people about the situation, who then contact even more people.

Volunteers go to the neighborhoods where there are concerns to try to confirm if there are ICE agents present, or to record ICE agents’ actions.

Agustin Diaz, 31, helped set up the network and is the only US citizen among the main organizers of Together Without Borders. In late February and March, he says, the group got calls almost every day. On most calls, people are afraid because they heard something or saw a car drive by a few times.

When there are ICE agents present, the volunteers provide callers with a procedure to follow so that they don’t panic. Number one rule: Don’t open the door. If there’s a deportation order, ask the agents to pass it under the door.

“We told everybody not to open their doors and basically stay quiet,” says López.

More often, though, the call comes too late. If someone has already been detained by ICE, the best the network can do is connect the family to trustworthy lawyers and resources.

“If somebody’s been taken, the thing we want them to know is that we’re here for them. We won’t abandon them, ” says Diaz. 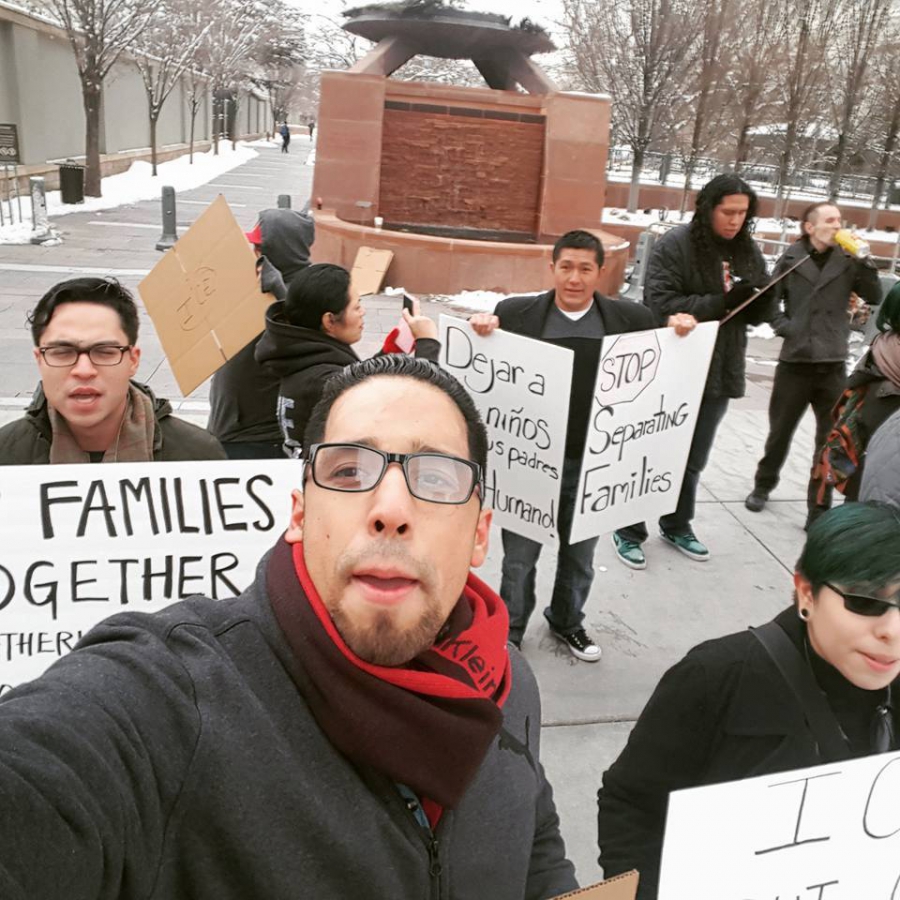 Together Without Borders formed in Utah to work toward immigration reform. On Feb. 1, they protested deportations at Temple Square in Salt Lake City. One of the group's leaders, Agustin Diaz, took a photo of himself at the protest.

Courtesy of Agustin Diaz/Together Without Borders

López says that, with this latest news of raids, she thinks about just staying home. But she runs a cleaning business and has to make a living. Her mother, she says, stays home a lot these days. They worry especially about their father, who has darker skin and a thick accent. She thinks this could make him an easier target.

López, 28, has lived in the US for most of her life. She was born in Mexico City and was 12 when she crossed the border by foot with her mother and two younger sisters to join her father, who had already lived in the US for two years. Her husband is a US citizen and her two young children were born here.

Last year, she opened up about her life to try to explain what it’s like to live in fear of deportation, of being separated from her family. Since then, she has been granted DACA, Deferred Action for Childhood Arrivals, a program that gives her temporary relief from deportation and work authorization.

But in the face of this latest news, even DACA doesn’t give her full relief. Earlier this year, a DACA recipient — a mother like López — was deported despite her status.

Mormons in Utah are heavily Republican, but as more Latinos join the church, they have a complicated relationship with both parties and Obama over immigration policy. In the current race, Republican presidential nominee Donald Trump has vowed to deport all undocumented immigrants, some 11 million people. Both Democratic candidates Bernie Sanders and Hillary Clinton have criticized the raids.

"Families fleeing violence in Central America must be given a full opportunity to seek relief. And we need to take special care of children," Clinton said in a statement.

Diaz says the phone network is a way to help people feel less fear, but sometimes there’s just nothing they can do. The deportations happen anyway.

“They’re just going to go. It almost seems kind of hopeless sometimes,” he says. “But there has to be something in place, versus nothing being done.”

Within hours of the Reuters report, Together Without Borders set up a meeting so members can to organize and be ready. They are also planning workshops to help mitigate fears and give people information about what to do in different situations with ICE.