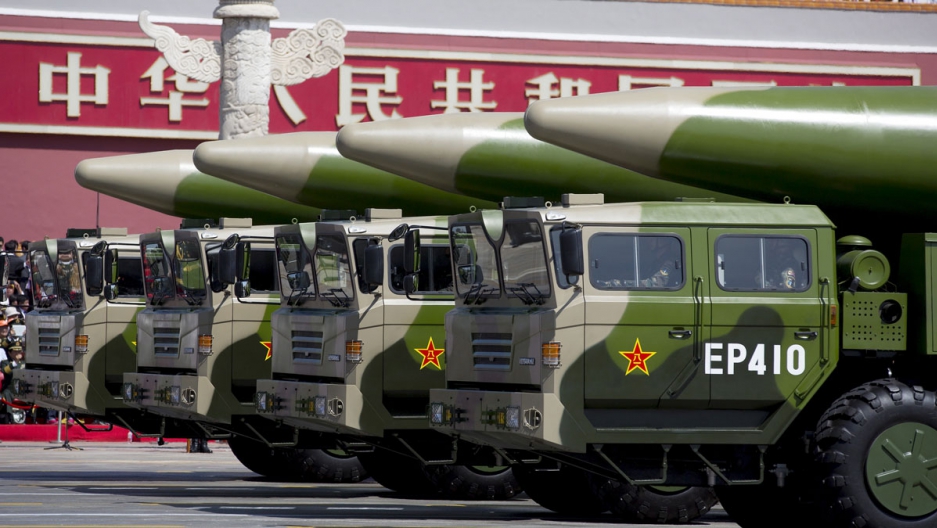 Military vehicles carrying DF-26 ballistic missiles travel past Tiananmen Gate during a military parade to commemorate the 70th anniversary of the end of World War II in Beijing.

World military expenditure had been declining since the beginning of this decade until 2015, which saw a 1 percent increase.

Global governments spent a total of $1,676 billion on defense, and more than one-third of that came from the US, the world's top military spender, according to new figures from the Stockholm International Peace Research Institute (SIPRI).

While US defense spending decreased by 2.4 percent to $596 billion compared to the year before, other big spenders — China, Saudi Arabia and Russia, primarily — led to the overall increase.

China's military spending grew by 7.4 percent to $215 billion, but still makes up only 1.9 percent of its gross domestic product, lowest among the big spenders. Saudi Arabia and Russia increased their defense expenditure by 5.7 percent and 7.5 percent respectively, to 13.7 percent and 5.4 percent of their GDP respectively.

According to SIPRI, the surge in military spending in many countries was caused by heightening regional tensions. Countries bordering Russia and Ukraine including Estonia, Latvia, Lithuania, Poland, Romania and Slovakia increased their spending after the crisis in Ukraine.

The South China Sea dispute contributed to “substantial increases in expenditure by Indonesia, the Philippines and Vietnam, and triggered the start of a reversal of the long-term downward trend in Japan’s military spending.”

With the notable exception of Saudi Arabia, the crash in oil prices since 2014 has led to decreased expenditures in many oil producing countries including Venezuela, Angola, Bahrain, Brunei, Chad, Ecuador, Kazakhstan, Oman and South Sudan.

The independent international think tank also analyzed the opportunity cost of global military spending, or what could've been done if the money were not spent on the military. It found that re-allocating just 10 percent of the spending would be sufficient to achieve major progress on the Sustainable Development Goals, a 15-year initiative launched by the United Nation's to address the world's most urgent challenges including poverty, hunger and universal education.

Based on SIPRI's information and our own research, we have developed an interactive allowing you to see how a cut in military spending could benefit the world. What cuts would you make? Tell us in the comments below.