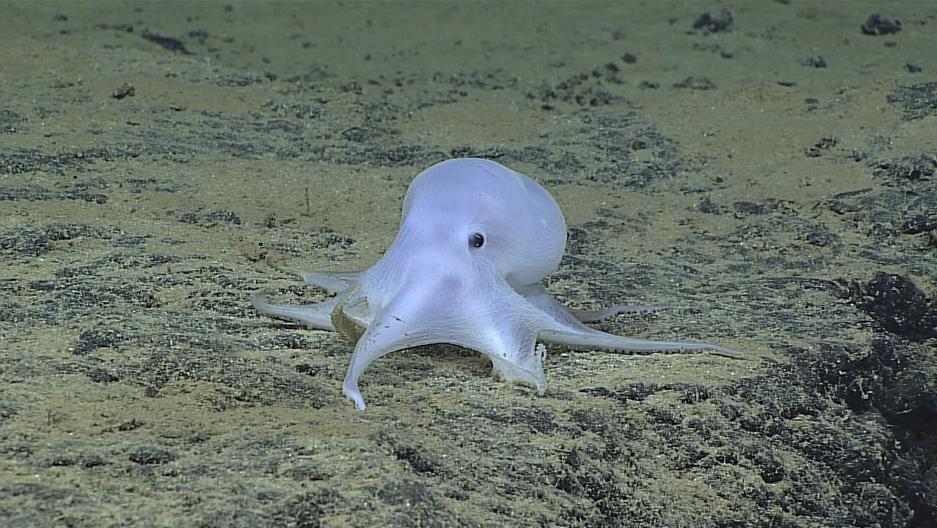 An incirrate octopod is shown at a depth of 4,290 meters taken by a remotely operated underwater vehicle Deep Discoverer near Necker Island, or Mokumanamana, on the northwestern end of the Hawaiian Archipelago.

Is a human smarter than an octopus?

“It’s really the wrong question to ask,” says primatologist Frans de Waal. “Because I’m smarter than an octopus in things I’m good at, like language and technology. But the octopus is smarter than me in many other ways.”

Inky the octopus recently made an astounding escape from his tank in the national aquarium of New Zealand. Under the cover of darkness, he squeezed through a crack in the top of his tank, stretched his long body through a drain hole in the floor and slithered down a 50 meter pipe to escape into the sea. Is Inky a genius?

De Waal argues that the trick to measuring animal intelligence, is not to use human standards, but rather the standards of the animal itself, whether it be an octopus or elephant or chimpanzee.

“The octopus obviously has cognition going because cognition is the processing of information,” says de Waal, “We should be asking ... how does he solve the problems in his environment? And how it compares to humans is sort of a secondary issue in my mind.”

In his new book "Are We Smart Enough to Know How Smart Animals Are?" de Waal says too often scientists haven’t done animals the courtesy of testing them in their own environment. In the book, he documents past and present experiments revealing all sorts of animal smarts, from the photographic memory of the chimp Ayumu, to the facial recognition abilities of wasps.

“For the longest time apes and monkeys were said not to recognize faces,” de Waal says. “And then at some point I learned that they were testing all these animals on human faces. And so we started testing chimps on chimp faces and they were perfectly good at it. And now, of course, we know that sheep can recognize faces, that the wasps can recognize faces. ... If you test them on our terms, which we have been doing for the longest time, and you find negative results, that doesn't necessarily mean anything.”

De Waal says there are studies on animal politics and culture — some of which are surprisingly similar to our own ways of doing things.

“Chimpanzee politics is how chimps form coalitions to achieve power,” de Waal says. “Chimp males, when they fight for positions, for example, they will try to get female support by tickling the babies of the females and holding them up — a bit like what the [human] political candidates are doing.”

De Waal says there are also a number of studies on anthropomorphic animal behaviors, such as empathy and consolation.

“The connection to the emotions of others, which I call empathy, for example, is very developed in the mammals, but there are now studies on birds, and I'm actually involved in a study on fish believe it or not,” says de Waal, “Consolation behavior as I call it, which chimpanzees do — let’s say someone is distressed and they go over to that individual and they embrace and kiss. Consolation has now been documented in many species. And anyone who has a dog probably has experience with it also.”

“Why do we always want to compare animals to us and we need to come out as the smartest of them all?” de Waal says. “Why have we for such a long time declared them dumb basically and not seen how smart they are? There's of course a religious component to it ... [and] there is a moral component to it. ... If you start farming, which we did, we started about 15,000 years ago ... maybe you need to develop a different attitude to animals and instead of respecting them or being even in admiration for them, you need to say, ‘Well, they're just animals and we can do whatever we want to do.' So there is a moral component to this attitude.”