The poutine at the Public House at the Venetian Hotel in Las Vegas: fries topped with duck confit, stout gravy, cheese curd and a fried egg.

When Canadians were asked to name their country’s greatest inventions, the winners included insulin, the telephone and the lightbulb. And poutine.

For those unfamiliar with poutine, it’s french fries doused in gravy and cheese curds, and whatever else you can think of. Legend has it that the dish was invented in Quebec in the 1950s. It’s now being taken to new heights in Las Vegas.

I first heard about the Vegas poutine trend from a short article in Las Vegas Weekly. So I e-mailed the writer, Brock Radke, and asked if he’d take me on a personal poutine tour.  We began at Bruxie, a California-based chain now open on the Las Vegas Strip.

“So this poutine has waffle cut french fries, which adds a new dimension of probably unnecessary gluttony, right? Chopped up bits of fried chicken, cheese curds and sausage gravy,” said Radke, poking a fork in our dish to see what else might lurk below.

Methodically, we plowed our way through the plate. We were both a little conflicted.

I agreed. I asked Radke if there were just too many things mashed together.

“No,” said Radke. “I just don’t think that these things seem to have anything to do with each other.”

This said, we kept eating. 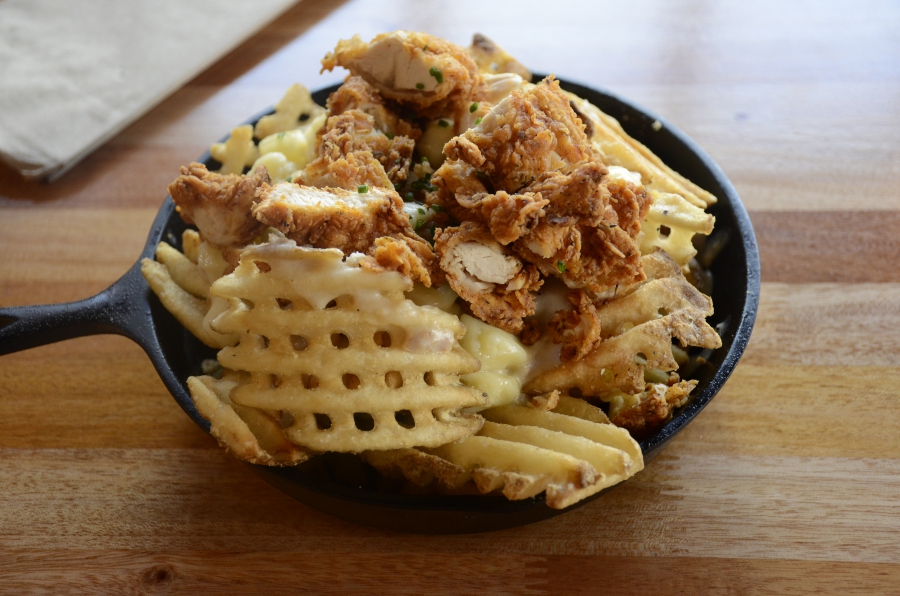 The poutine at Bruxie.

Next stop, we decided to step back and try a more authentic poutine, Smoke’s Poutinerie, a Canadian chain recently opened in downtown Vegas.

“It comes from Canada, you gotta go to the source, right?” said Radke.

The menu offers a dizzying number of combos. Robert Buckel, the friendly owner, greeted us at the counter. He’s not Canadian; he’s a native Californian. Still, he gave us a basic lesson and said many Americans are a little afraid of poutine.

“I do have to explain it to them. Just imagine it’s mashed potatoes with gravy, but deep fried,” said Buckel. “A lot of times, it clicks in their mind, oh that sounds really good.”

We confirmed that. “These are all really, really good,” said Radke, digging into our Smoke's poutine. We sampled four varieties: vegetarian, double pork, smoked peppercorn with mushrooms, and Radke’s personal favorite, the bacon cheeseburger poutine.

“This one is just like the best bacon cheeseburger that you ever had just kind of exploded, and you put a firecracker in it and nuked it, and now you’re just going to eat the remains of it.”

Yeah, what he just said. 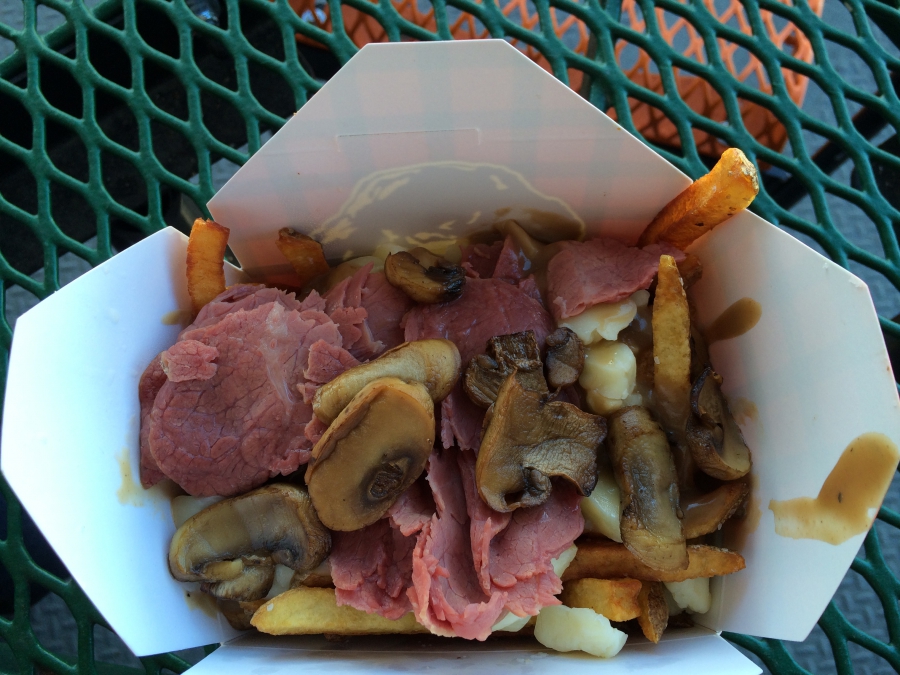 One problem: We were both beyond stuffed. Radke had to go lie down. My time in Vegas was limited though, so I pressed on. Next stop: the Barrymore, a cool, classy steakhouse on the northern edge of the Strip.

I told the waiter, Luis Ponce, I was here for one thing and one thing only.

It was the most extraordinary plate of french fries I’ve ever had. But, as I was eating, I was also thinking: There’s no gravy here, no cheese curds. ... Does this even qualify as poutine? A lot of Canadians might say no. But they’re not so worried about that in Vegas.

“As far as how important it is to stay with the traditional poutine, I don’t think it’s so important anymore,” said Kirk Perry, the general manager at the Barrymore and a longtime chef. Perry's view on food today: Anything is game.

“Between the ability to get ingredients from anywhere on the planet, to new modern techniques,” said Perry. “I think that in today’s blending world of cultures, cuisine is a great way for us to expand upon that and do new and creative things.”

The Barrymore's poutine: fresh crab meat, asparagus, and béarnaise sauce over the top.

Well, three poutines stops in one day was more than enough for me. And where else can you really go after crab and asparagus on your fries?

But this being Vegas, I was feeling greedy. I took a few days off, then went to the Public House, a restaurant at the high-end Venetian Resort Hotel. The poutine here comes topped with duck confit marinated for 24 hours, cheese curds, stout gravy and one egg sunnyside up. And chives. The sommelier, Bernard Erpicum came by to suggest a drink pairing.

“You know you want a light pinot noir, something more feminine. So you have the bing cherry, black cherries, so that it can substantiate the cheese curd, the french fries without overpowering it,” said Erpicum. “Create a really interesting little dance.”

I felt like I’d died and gone to poutine heaven.