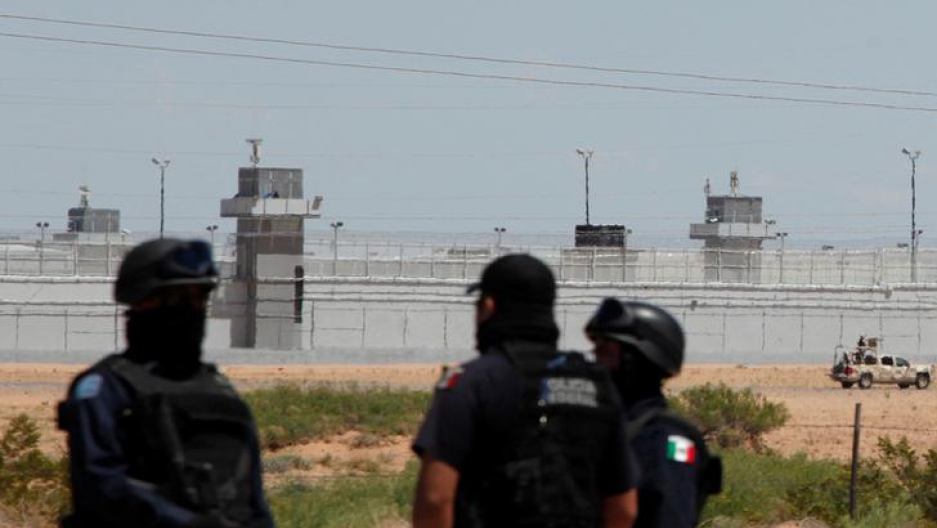 Federal police officers stand guard near a prison in Ciudad Juarez, where Mexican drug boss Joaquin "Chapo" Guzman was moved from his jail, in central Mexico, May 7, 2016.

Joaquín "El Chapo" Guzmán, considered one of most violent heads of any drug cartel in Mexico, is currently behind bars again — in a Mexican prison. But perhaps not for long.

He was moved over the weekend from one high security prison to another, closer to the US border. That was followed by news Monday that a Mexican federal judge has ruled that El Chapo can be extradited to the US where he faces drug trafficking charges.

“It’s good news, but incomplete news,” says Alejandro Hope, security and justice editor at El Daily Post in Mexico City. “El Chapo will not be extradited anytime soon, not yet. What the federal judge did was to offer a non-binding ruling asserting that extradition is legal, but there are still a number of hurdles that have to be jumped over."

Legal experts say it could take weeks or possibly months to overcome those hurdles. Mexico’s Ministry of Foreign Affairs has to meet formal legal requirements and El Chapo’s legal defense team has several options to try to block any extradition.

So why was El Chapo moved to a prison closer to the US border, to the northern city of Ciudad Juarez?

The "official" explanation is that the move was due to some ongoing renovations at the Altiplano Prison where el Chapo was jailed until this past weekend. But that sounds "a little bizarre," says Hope, because “he could have just been moved to a different cell or a different section of the same prison.”

It’s been suggested the prison in Ciudad Juarez is closer to the US and would make a extradition transfer easier. But Hope says El Chapo “could be easily flown by helicopter to an airport near Altiplano prison and put in the custody of a US marshal within 10 minutes, so that’s not a constraint.”

Hope points to other possible explanations for the move. Mexican authorities might have planned this transfer long ago, says Hope, in order to disrupt any possible attempts at escape. Or authorities “got really paranoid when an electrical malfunction occurred recently at Altiplano Prison and they thought that might be a signal that something might be going on, so they decided to transfer him.”

Hope says there’s another unlikely, but possible explanation: Authorities “might have discovered El Chapo’s actual escape plans and they decided to pre-empt it by transferring him to a different prison.”

So the whole issue of whether el Chapo is eventually extradited may come down to a tricky calculation.

“It depends on the time frame,” says Hope. “Right now it’s a race between extradition and escape. If he’s given enough time in a Mexican prison, El Chapo will certainly attempt to break out from jail again. So how fast can extradition happen? My guess is probably not for another year at the earliest.”

Will that be soon enough? “That’s something very hard to predict.”