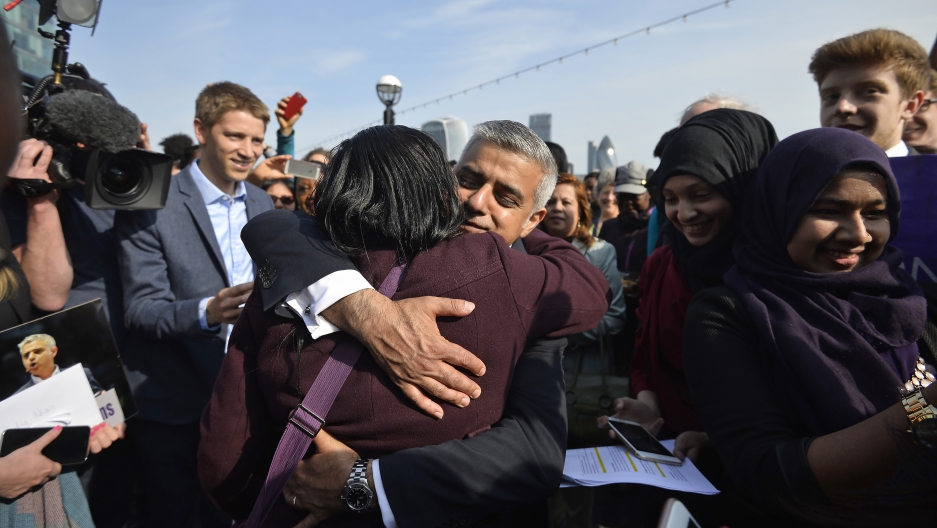 London's newly elected mayor Sadiq Khan is embraced by a supporter as he arrives for his first day at work at City Hall on May 9, 2016.

"I'm Sadiq Khan and I'm the mayor of London."

Those were Khan's first few words as mayor of the megacity over the weekend.

Khan is now effectively the most powerful Muslim politician in Europe. He's also the first Muslim mayor London has ever had. And that means something powerful to the UK's Muslim communities.

"His victory has an enormous personal and political impact on me," says Qari Asim, senior imam for the Makkah mosque in Leeds, UK. "It has strengthened my understanding of the British culture."

For Asim, a leader in a city with a large Muslim population, Khan's victory is all the more important because the mayoral race was riddled with "smears of religion and ethnicity." By that, Asim is referring to the Conservative campaign's personal attacks on Khan. Prime Minister David Cameron even accused Labour's candidate of supporting terrorism and appearing on the same platform as radical Muslims, all of which Khan has denied.

The Conservatives were also accused of sending out letters to Hindus and Sikhs that targeted ethnic divisions to turn voters against Khan, whose parents immigrated from Pakistan.

For Asim, the fact that these measures didn't stop Khan from winning shows that voters were not interested in hatred.

Khan's election, Asim says, makes two important points clear: "Firstly, it defeats the narrative that far-right [politicians] want to play that effectively Muslims can't be trusted to lead communities and societies, and secondly, [it shows] that Muslims are part and parcel of this society."

"We are Brits and Britain is our home."

Asim, whose own father immigrated from Pakistan, feels that his personal story is very similar to Khan's.

He hopes that other Muslims in the country will be inspired by Khan's victory.

"I'm hopeful that Sadiq Khan will act as an inspiring role model for young Muslims and young people that effectively if you have a dream then your dreams can come true if you work hard," he says.