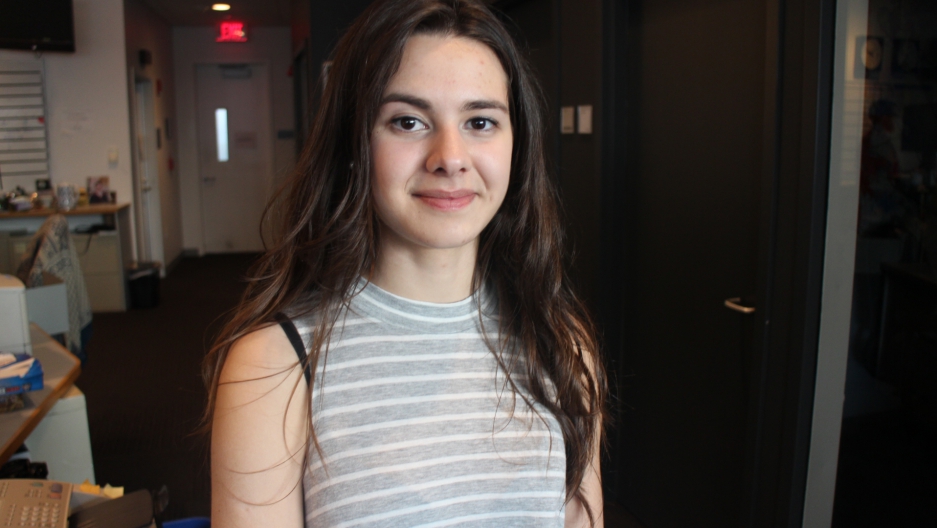 Valeria Dovale crossed the US border when she was a child, and qualified for the Deferred Action for Childhood Arrivals program, which allows undocumented immigrants to work and attend college. But she still faced hurdles to get her application through.

Let's say you're an undocumented high school senior, but you're temporarily protected from deportation because of the Barack Obama administration's Deferred Action for Childhood Arrivals program.

DACA also allows you apply to college, so you create an account with Common Application, a nonprofit that allows you to submit your application to 600-plus schools at once. But when you get to the part that asks for your legal status, there's not an option that accurately describes yours.

This is what happened to Valeria Do Vale, an 18-year-old high school senior in Boston.

Do Vale, from Brazil, crossed the US-Mexico border with her mother and baby sister when she was 7. She's undocumented, but qualified for DACA, which also lets her work, get a driver's license — and go to college, so long as she pushes through the bureaucratic glitches in the admissions process.

Do Vale says DACA doesn't qualify her to receive financial aid. Also, the Common Application is linked to FAFSA, which stands for Free Application for Federal Student Aid. When Do Vale put in her Common App, it created notifications for schools saying there was something wrong with her immigration paperwork.

That's because, in this aspect, the process of applying to college hasn't been able to keep up with immigration law. The forms need a checkbox for "DACA" or "undocumented" students, says Do Vale.

In her experience, it's not just the automated part of the application that leaves DACA students out. Some admissions officers and school counselors are also uninformed about the options for undocumented students.

Do Vale says when she began applying to college, she had to do research on her own — calling and emailing schools individually to explain her undocumented status but also that she was legally allowed to stay in the US because of DACA. She also educated some of her counselors along the way.

"I was actually the one who was guiding the guidance counselors in my school about being undocumented and what I had to do," she says. "Then they actually sent undocumented students to me so that I could help them in terms of what scholarships are open to them, what schools are good to apply for."

Even before DACA went into effect, there was a small network of higher education institutions that quitely admitted undocumented students. Do Vale got involved with the Student Immigrant Movement, an activist group that connected her with undocumented college students who informed her about schools that better understand their circumstances.

"These schools ... have an understanding that, you know, we want to go to college and have contributed through taxes, we've gone through the entire high school years," she says.

She started a SIM chapter at her high school, the John D. O'Bryant School of Mathematics & Science, and says she is now working on a template to help undocumented and "DACA-mented" students write college admissions essays that explain their legal standing.

Do Vale's efforts fit into a larger push by Boston Public Schools (BPS) to get immigrant students to college. Recently the school district held a workshop to help DACA-eligible students navigate college applications and talk with representatives from schools that "have a declared interest in fostering immigrant students' well-being and academic progress in Boston," says Diana Iglesias of BPS' Office of English Language Learners.

"[At] UMass Boston ... there's been a lot of student and professor organizing to not only try to get more DACA-mented students into UMass," she says, "but also once they're there to say, 'You're welcome here, you're supported and you're going to thrive here.' So we did keep it more to schools that are very clear in their intentions with immigrant students and undocumented students specifically."

Despite these organized efforts, there isn't a regular BPS-run program that helps immigrant students navigate the paperwork of college applications. And the path to college is not clear for immigrant students.

A Cape Verdean high school senior in Boston, who preferred to remain anonymous because of her undocumented status, says she does not have the same support network as Do Vale. She's arrived in the US too recently to qualify for DACA, and now hopes that a Supreme Court decision could expand the program to benefit immigrants like her. But now, she is in limbo.

She also doesn't want her teachers to find out she's undocumented, and says she doesn't have any undocumented friends that she knows of.

The student's parents are in Cape Verde, while she lives in Boston with an aunt who is a US citizen. When the student was a high school junior, she remembers her aunt saying, "You're not going to be able to go to college because you don't have any papers."

But she was undeterred. She waited in her counselor's office until all the other students had left.

"She said, 'You must have something very important to tell me,'" the student recalls. "I said, 'Yes, I want this to be between us.'"

She told the counselor she didn't have papers, and that allowed the staff to help her apply to college and find scholarships not requiring citizenship or legal immigration status. Her counselors advised her to seek out private schools — less likely to request immigration information, but also more expensive.

An A student, she has now been accepted to several universities that have agreed to cover a portion of her tuition. A favorable ruling by the Supreme Court regarding an expanded DACA program would be a break for her, she says.

Money was also the final hurdle for Do Vale, but her guidance counselor, after understanding Do Vale's immigration status, found a scholarship for her: Northeastern University awards a full ride to the top 10 percent students in the Boston Public Schools system.

Twelve years after crossing the border, Do Vale is now going to college, fulfilling a dream she and mother shared since they arrived in the US.

"Now it's worth it. My mom's hard work is worth it," Do Vale says, even though she didn't reach her goal without hard work of her own.