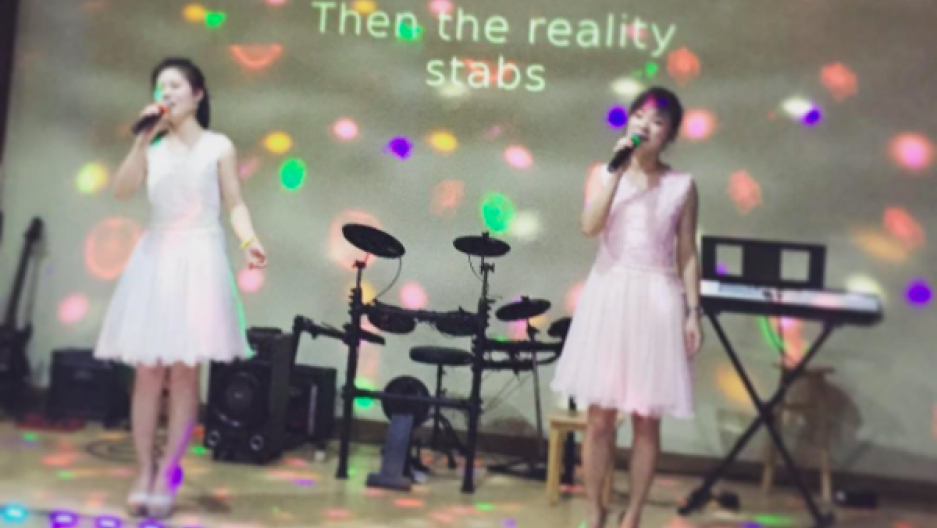 Waitresses at a North Korean restaurant in Bangkok croon along to karaoke tracks.

Their posture is immaculate. Their teeth are like pearls, gleaming behind well-rehearsed smiles. When speaking, their voices are demure. When singing, they produce operatic melodies in perfect harmony.

In short, they are the feminine ideal as imagined by the North Korean state.

With one exception, that is. Each night, these agents of Pyongyang grab the hands of paying customers — yes, even "imperialist" Americans and South Koreans — and twirl about the room. All the while, they sing songs like John Denver’s “Take Me Home, Country Roads” and “My Heart Will Go On,” the schmaltzy theme from the "Titanic."

These odd scenes play out inside North Korea’s network of restaurants, which are scattered from Dubai to Moscow to Hanoi. Each franchise is part restaurant, part performance hall. The star attraction: singing waitresses imported from Pyongyang.

“Musically speaking, they are highly trained,” said professor Sung-Yoon Lee, an expert on North Korea at Tufts University in Boston. “They are people who would be very competitive music students at a leading conservatory in Boston or New York.”

Instead, the woman are stuck in 100-odd restaurants across Asia to entertain men as they slurp down noodles. Most customers order “raengmyon,” North Korea’s signature dish of cold noodles in a beefy broth. They can wash it down with rice liquor flavored with acorns.

North Korea’s foreign-deployed waitresses hail from trusted families with ties to the regime, Lee said. Despite their status, they’re only permitted to send a small amount of money home. Most of the earnings are funneled back to Pyongyang, now starved of cash thanks to crushing US sanctions.

This embargo, ratcheted up in March, aims to totally freeze the regime out of the global financial system. Still, the restaurants, according to South Korea, continue to haul in roughly $10 million per year.

Over a period of six months, I visited three North Korean restaurants in Southeast Asia to secretly record nightly performances.

At one franchise in Yangon, Myanmar, waitresses perform an instrumental version of Frank Sinatra’s “I Did It My Way” on dueling flutes. Later, they bring up an all-female rock band to crank out “Ob-La-Di, Ob-La-Da” by The Beatles.

During a Bangkok performance, waitresses summon men from their seats to do the waltz. Their finale: a conga line in which foreigners and staff clutch hands and parade around the room.

“I have a feeling that everything [inside the restaurants] is videotaped,” Lee said. “I would be stunned if North Korean restaurants were not bugged.”

Pyongyang has a good reason to spy on its far-flung staff. Over the years, several women have run off to seek asylum. And the regime is now reeling from one of its most embarrassing mass defections in recent history — 12 waitresses who fled en masse from an outlet in China.

Following that April defection, more than a dozen North Korean franchises have abruptly locked their doors. South Korea’s government, which is now ordering its citizens to stay away from these restaurants, takes partial credit for the shutdown. Other experts speculate that an alarmed Pyongyang is simply tightening security.

In Bangkok — home to two North Korean restaurants — one is “closed for renovation,” according to a sign posted by the entrance. The other is run by a skeleton crew. All singing and dancing is temporarily canceled.

Though the waitresses are fortunate by North Korean standards — they are neither starving nor worked to death in labor camps — they too are victims. Defecting ex-waitresses have said staff are never allowed to leave the restaurant alone and are frequently berated.

Back home, where embracing Western culture is forbidden, belting out American pop songs in public could land citizens in a dismal labor camp.

After all, according to Pyongyang’s rhetoric: “US imperialists are the sworn enemy of the Korean people” who are rapt with “the fighting spirit of annihilating them.” Similarly bombastic threats to launch a “pre-emptive strike of nuclear justice” on American soil helped convince the US to boost sanctions.

But while North Korea’s propagandists screech anti-US hatred by day, female comrades are ordered to pirouette with Americans and other foreigners by night — all while singing John Denver tunes.

At a glance, this is confounding. But according to Lee, this is a calculated two-pronged propaganda strategy. “The restaurants,” he said, “have value for the regime in representing North Korea as a more accessible, even attractive place.”

Still, the performers are forbidden from revealing too much humanity to outsiders. With the help of a Korean interpreter, I posed a series of seemingly benign questions to a North Korean server in Thailand. With studied poise, she offered stiff answers in line with the ruling party’s ideology.

Asked if she uses Facebook, the waitress replied: “I know about the internet. But when you are surrounded by music and friends, why would you waste your time on such a thing?”

Asked if she enjoys American songs, she said, “My country has everything I need. When you start looking outside your culture, it reveals a problem in your political mindset.”

Asked if she misses home, she said that “this restaurant is considered North Korean territory.”

As my questions mounted, the waitress appeared visibly tense and began whispering to her manager, who promptly sent her away and took over her duties. After rejecting my request for an interview, he accused me of pushing “political questions” on his staff.

“If you’re curious about our culture, you should go to our embassy,” he said. He too appeared nervous and his jaw quivered as he spoke. “The news, they just make things up ... so personal, political questions, we don’t want that.”

But chatting about Facebook and music — isn’t this the sort of banter you’d hear among friends? At last, his rigid composure broke and he laughed in my face.

In other words, we may sing your songs. We may even take your hand and prance around the room. But don’t let that fool you.

We are not your friends.