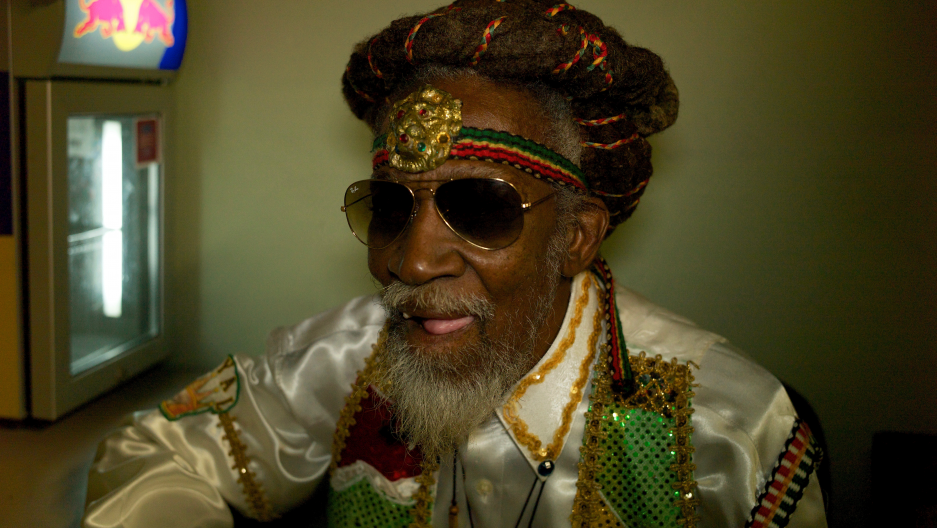 Bunny Wailer, the last of the three singers who banded together to revolutionize Jamaican reggae, talks about his career with The World's Marco Werman.

As a Jamaican expat said to Bunny Wailer in the green room after his recent performance in Boston, "Peter gone, Bob gone. You da only one dere."

This is a statement of fact, but also of musical reality. Bunny Wailer is now 69, and appears to be in good health. He spent 90 minutes before an excited full-house at Boston's Paradise nightclub, ably dusting off old classics and new songs. He was dressed all in white, his gray dreads swirling on his head like the top of a soft-serve ice cream cone.

"Because I didn't leave the Wailers," he told me. "I'm still here, representing the Wailers."

He paused, and as if calling out to the crowd he just left, and asks of no one in particular, "Who's representing the Wailers? I am. Bunny Wailer!"

When you go back and listen to the first single released by the trio known as The Wailers, the bouncy 1963 track "Simmer Down," you quickly realize they were no average Jamaican band. After all, that first single was a plea to Kingston's gangs or "rude boys" to stop their rampage of Trenchtown and other ghettos in the city. The first ska-rocksteady-reggae group with social consciousness would be the touchstone for many others.

The other thing that makes the Wailers stand out, even today, is that they were a family. Literally. Bob Marley and Bunny Wailer crawled around the same ground as toddlers in the Jamaican hill town of Nine Mile. Bunny explained to me:  "Myself and Robert Marley attended the same elementary school, you know. And we became members of the same family when my dad had with his mom a daughter called Pearl. And later on Peter had a son with my sister Shirley named Andrew Tosh. So the Wailers was and still is a family."

Before Bunny Wailer took the stage last Saturday, the emcee took the mic and told the crowd, "when you go home tonight and update your Facebook profiles, don't say you heard a 'legend.'" "Legend" (also the title of Bob Marley's heavy-selling CD anthology) is an overused word, he said, adding:

"When you update your Facebook profile, say you heard real reggae music."

That was also a statement of fact. What we heard that night was pure reggae.

Related: Without ska, there would be no reggae