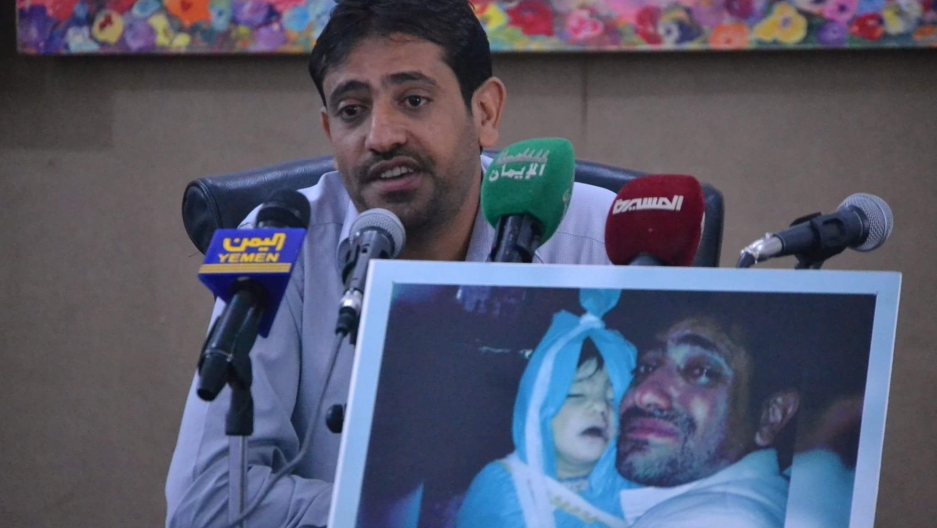 Ibrahim Abdulkareem at a hearing for victims of the Coalition in Sanaa, Yemen, April 26, 2016.

On July 3, 2015, Ibrahim Abdulkareem's home was hit by a Saudi airstrike, with his family inside. “It was 1:30 in the morning,” Ibrahim writes in Arabic, “we were sleeping.”

Ibrahim, the father of two, awoke to the sound of his wife screaming. She was pinned under the rubble of their collapsed walls. His son appeared to be OK. But his young daughter was completely buried in plaster and stone. EMTs arrived and they dug her out. The girl, her brother and their mother were rushed to area hospitals.

Ibrahim’s experience is not unique — six children were injured or killed every day in the first year of Yemen's civil war, according to UNICEF.

In March 2015, a Saudi-led coalition of mostly Arab nations sought to restore the government of Yemeni president Abdrabbuh Mansour Hadi, who had fled to Riyadh. The coalition began bombing areas controlled by the rebel group that had sidelined him, known as the Houthis. While representatives of the warring sides seek a diplomatic solution, fighting continues in many parts of the country, and civilians continue to die.

A United Nations-funded panel recently documented 119 cases in which the Saudi-led coalition killed Yemeni civilians with bombs and missiles. Additionally, a new UNICEF report reveals that over 900 children were killed and more than 1300 injured during the first year of fighting by both sides in the Yemen war.

Many Yemeni parents are quietly grieving the loss of their children. But Ibrahim has chosen to share his family’s suffering in an unabashedly public way. On Facebook.

“I hope my voice will reach the entire world..."

The photo at the top of this story includes a picture of Ibrahim Abdulkareem holding his 11-month old daughter, Zainab. She is dressed in her burial shroud. The photo was taken at the hospital morgue.

With tears streaming down his face, the father held his infant daughter in his arms one last time and asked his brother to snap the picture. “My brother hesitated, saying I wasn’t in good condition,” he writes, “and that there was no need for this photo.”

It would become an iconic image.

To date, the image has been viewed hundreds of thousands of times across Arabic and Persian social media. Ibrahim posted it originally on Facebook. It is still being reposted frequently on Twitter.

“Everybody was talking about it,” says British social media activist Jamila Hanan, who watched as the post suddenly appeared in the many Yemeni Twitter feeds that she monitors. “I found it really touched men, because obviously it is a picture of a father with daughter, and he is clearly distressed.”

“The picture may haunt [anyone who sees it],” says Sanaa resident and commentator Hisham al-Omeisy."But [it] does more to us Yemenis. I get a panic attack whenever I remember Abdulkareem hugging Zainab's lifeless body, and rush to tightly hug my two boys."

Al-Omeisy, who has endured many sleepless nights comforting his own children during airstrikes, says the photo can't help but stir up emotions.

"It's the worst feeling in the world when you, as a parent, have failed to protect your own. No matter what, who, or how much you try to pin [the] blame on [others], a big part of you will always blame yourself for not having done enough.”

Hanan says the photo was unique among social posts she has viewed from the Yemen war. “You see a lot of dead children, you see mothers grieving with children,” she observes. ”But there's not very much that really touches men, and the men were just sobbing over it… because they know that [Ibrahim] is not the only one.”

Hanan encouraged Ibrahim to write down his experience and asked a Yemeni in the United States, Harvard doctoral candidate Shireen Al-Adeimi, to translate his Arabic into English. Ibrahim's statement contains graphic descriptions that some readers may find disturbing. And be aware, some of the images in this story may also be troubling.

Ibrahim Abdulkareem blames the Saudi-led coalition for the destruction of his home, for the serious injuries his wife suffered and for the death of his daughter. “He wants to emphasize that his letter is a call for lawyers, politicians and human rights groups,” says translator Al-Adeimi, “with the goal of achieving justice for his family.”

“We have the right to live securely and safely, to be protected and to protect our children from murder and abuse,” Ibrahim Abdulkareem writes. “I hope my voice will reach the entire world, truthfully and clearly — Yemeni children are in need of help.”

“40,000 children die in Yemen every year before their fifth birthday...”

While fighting in Yemen has slowed since a Cessation of Hostilities began in mid-April, families in Yemen still suffer from the effects of the Saudi-imposed naval blockade, which has restricted deliveries of food, fuel and medical supplies. Health services across the country are barely functioning. United Nations emergency relief coordinator Stephen O'Brien, in a statement read before the Security Council on April 15, says that “some 10,000 children under the age of 5 may have died in the past year from preventable diseases — and this in addition to the 40,000 children who die in Yemen every year before their fifth birthday."

Images of child victims of the Yemen war are widely circulated among Yemenis. For some Western readers, though, this Reuters Image of the Day was their first clue that Yemen has a food shortage. 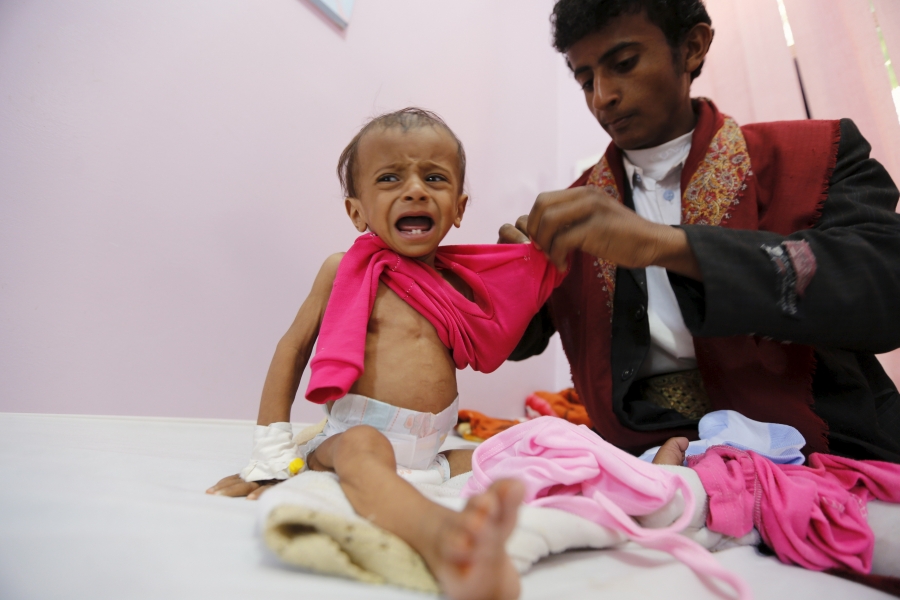 This picture of a malnourished Yemeni girl and her father, by photojournalist Khaled Abdullah, recalls photos from famines in Ethiopia and Somalia. It captures the severity of the conflict while giving it a human face.

"The child, though sick, is being looked after," notes Russell Boyce, chief photographer Middle East and Africa at Reuters. "In visual terms, the shape of the picture draws the reader into the image. The eye line of the man leads the viewer down to the eyes of the child, as does the angle of the arm that leads up to them. The empty space on the left of the picture that the child looks into allows [you to imagine the] room so you can almost hear the cries in that space. That’s why it was a picture of the day."

Like the image of the shrouded Zainab with her dad, this picture is both beautifully composed and painful to look at.

UNICEF reports that 1.3 million Yemeni children under the age of 5 face the risk of acute malnutrition. The food shortage in Yemen is caused not only by natural factors such as climate change, water scarcity, and population growth; Yemen, which imports most of its food, has been effectively cut off from the rest of the world by the war. Since March 2015, most supply ships have been prevented from entering Yemeni ports. The Saudi naval blockade, supported by the United States, was imposed to prevent weapons deliveries, but it also prevents food and fuel from entering Yemen.

Activist Jamila Hanan has been careful about what she reposts from the Yemeni Twitter streams she follows. “I never show pictures of dead children,” says Hanan, who has built a substantial social media following by retweeting messages and images to spotlight human rights violations from Bahrain to Myanmar to Yemen. Hanan decided, when her list of followers reached some 40,000 people worldwide, to stop showing child victims.

"I started to get the feeling that my Twitter stream was at risk of being like a long funeral procession of body after body," she remembers. "If anything, people would just turn away and block it out, because they would feel 'There's nothing I can do about it, and I don't want to see that in my face each day.'"

Hanan chose not to tweet the iconic father and daughter photo of Ibrahim and Zainab.

“It’s difficult at times. Sometimes a photo is really striking, and you know it's going to touch people. But I just decided to encourage people to try [to represent] people who have passed [with pictures taken] when they were alive and tweet about them,” she says, “and that's what I did with Zainab.”

This is Zainab. She left this world after #Saudi coalition airstrike on #Yemen last nighthttps://t.co/PoBD9jkvES pic.twitter.com/M26vjpUCQw

Hanan does not criticize Zainab’s father or other Yemeni parents who have shared disturbing images of their malnourished, injured or dead children. “To share it with the world,” she says, “is an incredibly brave thing [for a parent] to do.”

Hanan does maintain a separate blog, Yemen War Crimes, where she tracks civilian deaths and includes all relevant photos and videos, many of them showing images of severe injury and death. That is where she shares the photo of Zainab and her dad, along with news footage about the strike on their house, and a heartbreaking video taken at the hospital the night of the attack.

"I think our governments ... need to reconsider what they're doing in these wars..."

Some of the most troubling pictures from Yemen are of living children — in desperate circumstances.

10 million children in war-torn #Yemen are in need of humanitarian assistance @UNICEF_Yemen pic.twitter.com/nQPbKw81Nn

Some are homeless. Many have no school to attend.

#Yemen children BEG for PEACE hoping to go back to school after 1 yearly of war displaced millions & killed 1000s. pic.twitter.com/k68BarPDHu

A Saudi airstrike on a Yemeni marketplace in March killed nearly 100 civilians — including 25 children.

Within hours, these images, and many even more graphic, were being widely circulated by Yemeni Twitter users.

Footage from airstrikes hit market in Hajja too graphic, so I blurred the civilians & children killed in pic. #Yemen pic.twitter.com/12KiTUD7Ps

Grief over the broken bodies of children haunts Yemeni families after a year of war. Hanan chokes up a little when she considers the human cost of the fighting.

“It's just really absurd," she says, "and I think our governments across the world really need to reconsider what they're doing in these wars and how they can ever possibly justify dropping a bomb on a house with a whole family living there. It's just incredible that they’ve been doing this over and over."