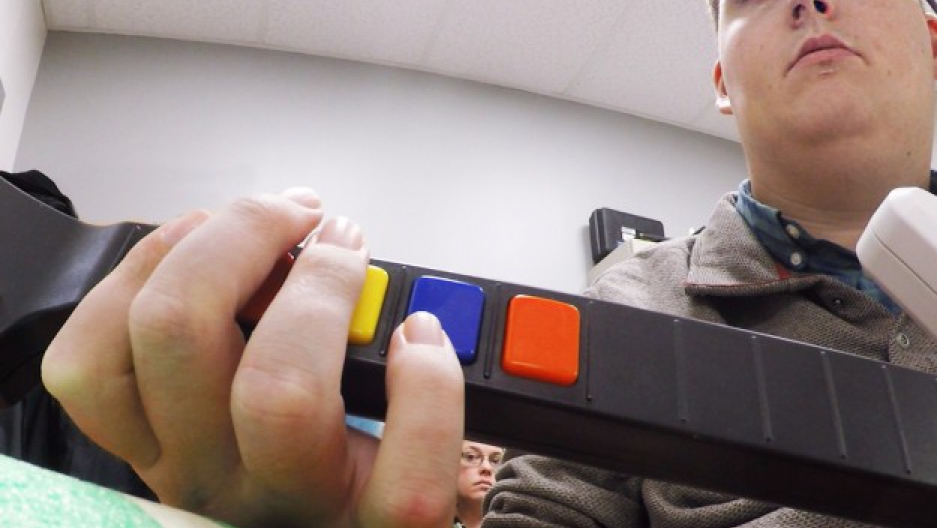 Ian Burkhart, 24, plays a guitar video game as part of a study with neural bypass technology.  A computer chip in Burkhart`s brain reads his thoughts, decodes them, then sends signals to a sleeve on his arm, that allows him to move his hand. Credit: Ohio State University/Batelle

Columbus State University business student Ian Burkhart was playing in the waves on the outer banks of North Carolina during a vacation in 2010 when he did something that would change his life forever.

He dove into a wave and that wave pushed him down into a sandbar where he broke his neck and damaged his spinal cord. The accident paralyzed him, leaving him unable to move much of his body below his elbows.

“Losing the ability to use my hands has made a huge impact on my life,” Burkhart says, “Not being able to walk isn't the thing. There’s other things that kind of take precedent over that.”

But now, about six years later, Burkhart has regained the ability to move his hands, pinch objects, pick up bottles, even play Guitar Hero. How? Burkhart’s brain has been wired to a computer that eavesdrops on activity in his motor cortex, and understands how he wants to move. The computer then transmits signals to an armband studded with electrodes, which stimulate Burkhart's muscles, allowing him to move his hand.

“We've now shown that it's possible to reroute signals from the brain around a spinal cord injury and to link those signals back to to the muscles in essence,” Bouton says. “It’s really the first time that someone has been able to regain movement through the use of signals recorded from within the brain and then linked back to the muscle activation in real time so that they are in complete control of that movement.”

The device that allows Burkhart to use his hands involves a tiny electrode array implanted in his motor cortex, in the area responsible for hand movement.

“This tiny array is actually picking up little electrical signals that are created by his neurons literally in his brain as he thinks about hand movements,” Bouton says. “Then we're feeding those signals into a computer where we have developed special software that actually can learn his brain patterns for the different movements and then can actually decipher or even in essence read his thoughts about those movements."

From there, the thought it turned into an electrical impulse sent directly to his muscles.

The device is still in the development stage, but Bouton and his team are working to get it ready for people with spinal cord injuries. Right now the device allows Burkhart to move his hand, but he still has no sense of touch. Bouton hopes that can eventually be addressed.

“In the future we do want to try to create a system that's bi-directional,” Bouton says. “Basically taking sensory information and sending it back up to the brain and allowing that sense of touch.”

Burkhart says, after many years of being unable to use his paralyzed hands, it took a lot of time and concentration to re-learn how to move them.

“I kind of had to break down and relearn how to make these movements,” Burkhart says. “Because it's not really a natural thing to think about, ‘OK, what muscles in my arm am I trying to move in order to get my fingers to extend? And then exactly what do I have to think about in my brain to make that happen?’ So it's something that for the first few months of using the system I was, you know, I had to concentrate extremely hard and in turn after a session I would be mentally exhausted to the point where I just wouldn't really want to do anything for a while because it requires such a deep level of concentration to kind of learn how to do that.”

Now, after almost two years in the study, Burkhart, even without the sense of touch, is able to rely on sight to move his arms. He often watches a researcher make a movement and then copies the movement. The business student is now able to learn new movements in about 15 minutes and Bouton says the computer learns along with him.

“We had to develop machine-learning algorithms, as we call it, in the computer that actually learn his brain activity,” Bouton says. “Over a period of about 10-15 minutes, the software actually improves itself and learns throughout that period while Ian is learning so that the machine and Ian are learning together. It's really amazing to watch.”