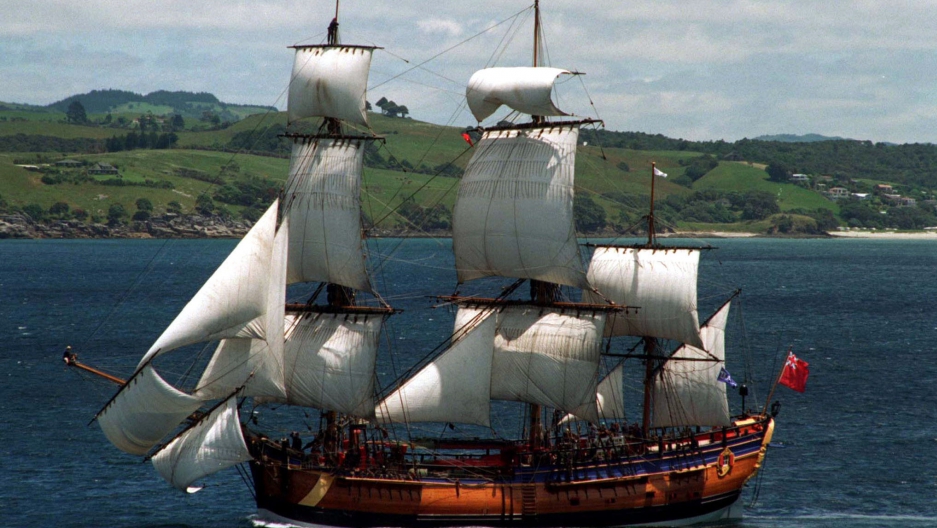 A replica of Captain Cook’s ship, the Endeavour, sailing off the coast of New Zealand in 1995. The replica was built in Australia in 1994, where Cook is a national hero.

Captain James Cook is the Christopher Columbus of Australasia. His voyages of discovery in the 18th Century opened the way for the colonization of the South Seas by Europeans.

And now Cook’s ship, the Endeavour, may have been found — but not where we might have expected. Marine archaeologists in Rhode Island say there’s an 80 to 100 percent chance they’ve located the wreck, on the ocean floor at the entrance to Newport Harbor.

But how did the ship that discovered Botany Bay end up at the bottom of Narragansett Bay?

The Endeavour was a ship of the British Royal Navy. Captain Cook sailed with her from England in 1768.

His original mission was to sail to Tahiti in the South Pacific, with a team of scientists, to observe the transit of the planet Venus across the sun. It was hoped this astronomical reading would provide vital information for science and navigation.

His other goal was to search for the Terra Australis Incognita — the "unknown southern land." Scientists and philosophers in Europe had assumed since ancient times that there must be a land mass on the other side of the world, to give the planet balance.

Cook’s orders can be paraphrased as “to explore strange new worlds, to seek out new life and new civilizations, to boldly go where no man has gone before.” Or, at least, no Englishman.

In the 1960s, Cook’s exploits inspired a team of TV writers working on a new series called Star Trek. James Cook: James Kirk. Endeavour: Enterprise. Cook even had a science officer: botanist Joseph Banks. In the 1980s, NASA named a space shuttle the Endeavour — spelt the British way — in honor of Cook.

He also found the Great Barrier Reef by literally running into it.

He also discovered "new life and new civilizations." His science officer documented the marvelous diversity of species of animals and plants in these places, all new to Europeans.

And Cook also met whole new cultures of people too. Indigenous peoples had of course been living happily in these places for thousands of years without any help from Europeans. Their descendants do not look on Cook favorably.

As the Columbus of Australia and New Zealand, Cook is seen as both hero and villain. Much like Columbus, he was long revered among whites for opening the continent to Europeans. But he is also vilified by indigenous rights advocates, because of the genocide that followed discovery.

Cook was also a pioneer of a different kind, in that he believed in using vegetables rich in vitamin-C to combat scurvy – the ancient scourge of sailors. He astonished the nautical world by not losing a single man to scurvy on his three-year voyage.

The Endeavour was a type of small ship called a bark. It was launched in England in 1764 as a private merchant ship and was originally called the Earl of Pembroke.

It was purchased by the British Royal Navy in 1768 for Cook’s expedition, and afterwards it remained in the Royal Navy till sold in 1775, just as the American Revolution was breaking out.

The Navy reacquired the ship as a transport vessel, and renamed it the Lord Sandwich (sometimes referred to as Lord Sandwich 2 since there was already a vessel of that name in the service). It was used to bring troops and supplies to the US from Britain. For example, it brought 200 Hessian troops to New York in 1776.

In 1778, the ship happened to be in Newport, Rhode Island, which was then under British occupation. That was the year that France entered the war on the side of the revolting colonists.

A large French expedition sailed in over the horizon, catching the Brits by surprise.

As an emergency measure, the British commanders in Newport decided to sink a bunch of transport ships in the entrances to the harbour, to prevent the French warships from sailing in.

It worked. The French hesitated, and then a massive storm came up and dispersed their fleet, putting a period to their invasion. But the British transport ships, including the Lord Sandwich (fromerly known as the Endeavour) could not be salvaged and remain to this day at the bottom of the harbor.

From archival research, marine archaeologists know that the Endeavour was sunk in a group of five ships. They now believe that this group of scuttled ships has been located.

As for Captain Cook, he made two more voyages of discovery in the South Atlantic and the Pacific. In Hawaii, in 1779, a squabble over a boat led to violence with the inhabitants. Cook and several Marines were killed.