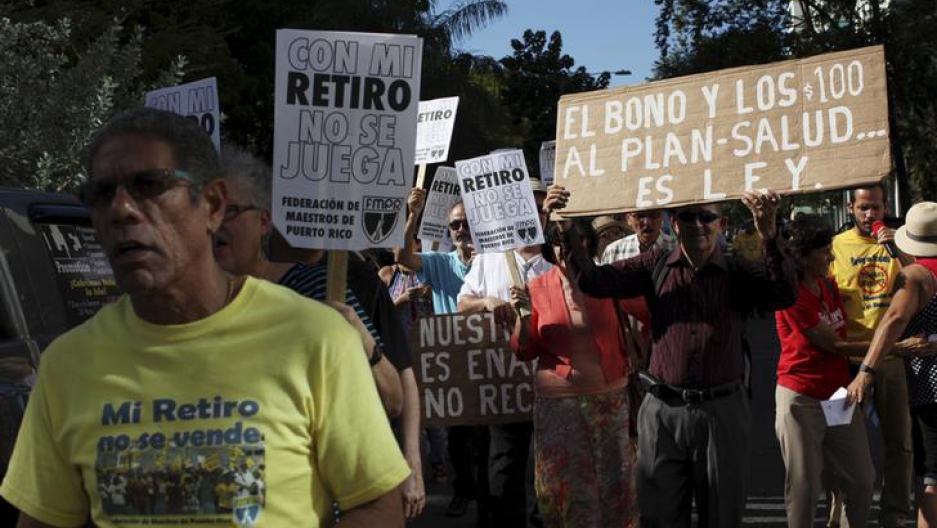 Retired teachers from Puerto Rico's Teachers Federation protest against the underfunding of their pension system in San Juan, March 18, 2016. The sign reads "Don't play with my retirement."
Credit:

The governor said that San Juan can't pay creditors when it needs to fund public sector salaries, health and education budgets, which, if neglected, could unleash a "humanitarian crisis."

Puerto Rico has been locked in recession for a decade, and already defaulted on some debt payments at the beginning of the year.

Despite sweeping spending cuts and some policy reforms, it has not been able to stop the deterioration of its budget deficit.

”There are higher taxes across the board, a new sales tax is among the highest in the US, and also there have been limits on public services that are being put into place," says San Juan-based reporter Luis Trelles. “Puerto Rico is very vulnerable right now. It just doesn’t have the mechanisms to restructure the debt that is weighing down on the island.”

Gov. García Padilla says he does not want a bail-out, but simply legal ability to restructure existing debt.

But in order to do so, the US territory needs Congress to act, and Congress will not, for partisan political reasons, the governor said.

"This was a painful decision. We would have preferred to have had a legal framework to restructure our debts in an orderly manner," he said in a somber televised address.

"I have had to make a choice, and I made a choice," he added.

"I have decided that your basic needs are more important than anything else," he told the territory's 3.5 million residents.

Compounding the problem is Puerto Rico’s dwindling workforce. In the face of austerity and high taxes, many young people are leaving the island in search of better jobs.

Over 250,000 people left the island from 2010 to 2014, says Trelles — the highest exodus the island has seen in modern history. “People are leaving from all walks of life. Young people are afraid of not having opportunities, but also retirees, doctors, teachers — they’re all fearing for their jobs, and they’re all feeling like there’s a lack of opportunity for them on the island right now."

The $422 million in bond obligations is owed by the Government Development Bank (BGF).

Prior defaults by the island were smaller in nature; this one includes debt held by Wall Street bondholders and hedge funds.

With a total debt of about $70 billion, the island is basically bankrupt; the BGF only has $562 million in assets.

"We have asked the US Congress time and time again to give us the tools to restructure our debts," the governor said. "We do not want a bailout, nor has one been offered. We want a process to restructure, which won't cost US taxpayers anything."

Puerto Rico's relationship with the US federal government is largely handled by the US Interior Department.

"That would be re-establishing colonial rule over Puerto Rico, and would be reopening a Pandora's box with extremely dangerous consequences," he warned.

Despite the anxiety over Puerto Rico’s imminent debt default and its ramifications, the journalist Trelles says he’s determined to make a go of it:

“I’m a big believer in Puerto Rican culture and nationhood, my family is here ... my roots are here," he says. "I don’t know how long I’ll actually be able to stay. It’s something that me and my generations and everybody around me constantly thinks about: ‘Should I stay or should I go?’ But right now I’m here, and I’m hoping it’s long enough for my 2-year-old daughter to understand what Puerto Rico is and that’s she’s Puerto Rican.”