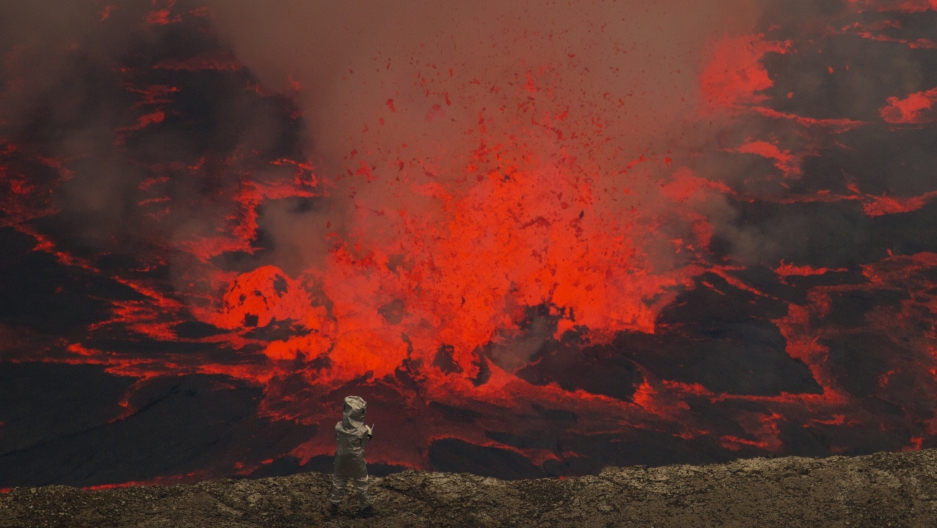 Mark Robinson traveled with a team from the Goma Observatory to set up monitoring equipment. He was in the volcano just days before it sprung back to life.

In the early morning of Feb. 29, park officials, tourists and locals near Mount Nyiragongo in the Democratic Republic of Congo heard an unfamiliar sound: rumbling.

What they were hearing was the sound of earthquakes deep below the surface. The movement knocked giant rocks off of the crater walls. And at the same time, a new vent appeared on a ledge.

Since that day, the vent explodes about every 30 seconds, throwing lava up to 90 feet in the air. Most of that lava flows back into the volcano, while the rest of it cools in the crater itself. 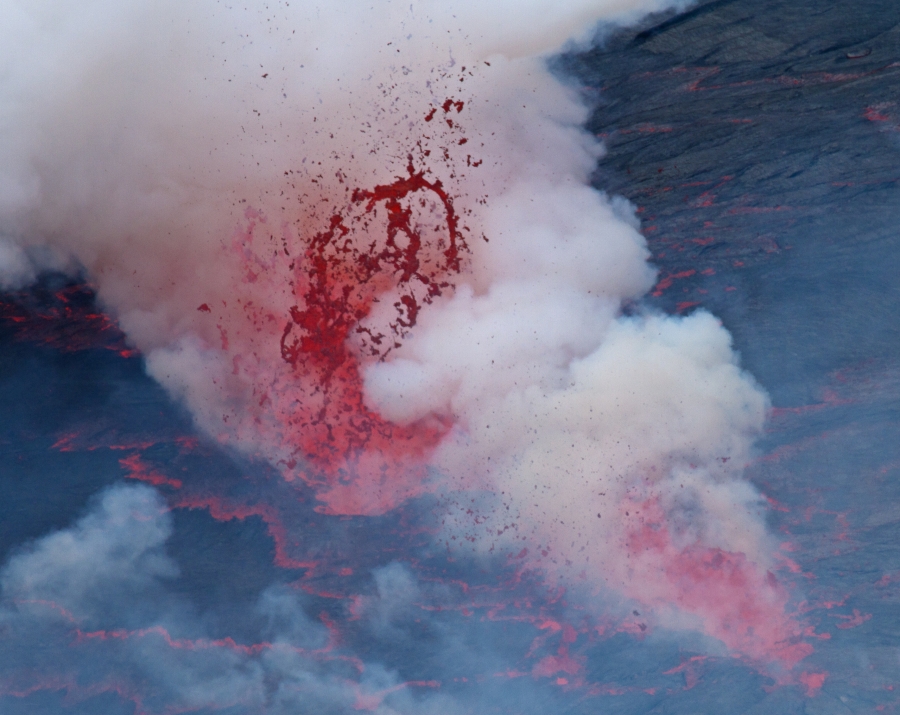 The new vent explodes every minute or so, sending lava up to 90 feet in the air. Most of that lava flows back into the volcano, but some of it cools around the crater.

It’s beautiful, but it's also a troubling reminder of a 14-year-old catastrophe.

The eruption effectively split Goma in two, destroying a third of the city. Lava even covered about 80 percent of the airstrips at Goma International Airport, making it almost impossible to evacuate people or get outside aid to survivors.

Just like back in 2002, the threat facing Goma today isn’t an explosion, but a fast-moving river of lava that flows out of cracks on the side of the mountain.

"The big concern with this volcano is the lava flow," says Mark Robinson, a meteorologist and severe weather expert who traveled down into the volcano just four days before it came back to life. “This one won't go off like Mount St. Helens. When Mount St. Helens went up, it was an explosion, a gigantic explosion. That was because the vent was essentially plugged and a tremendous amount of pressure built up underneath the mountain until it released ... Nyiragongo is much more like the volcanoes in Hawaii. [They are] very fluid, very fast-moving and very hot lava.”

This newest vent, the one that just opened up, faces Goma. Just like they did in 2002.

Robinson says that on some slopes, the lava can reach up to 100 kilometers an hour, or 62 miles per hour.

"That's pretty hard to get out of the way of," he says.

That's just one part of the puzzle, though.

Goma sits right on the shore of Lake Kivu, one of the African Great Lakes. The lake straddles the border between the DRC and Rwanda, and holds massive amounts of methane and dissolved carbon dioxide because of its proximity to volcanic vents, among other reasons.

"If the lake is disturbed, it'll go off. It'll basically erupt in the lake itself, like as if you took a pop bottle, shook it up and popped the top," Robinson says.

The shores of Laku Kivu are packed with about 2 million people. And with much of the infrastructure destroyed by years of a civil war and little to no upkeep, many experts agree that it would be impossible to evacuate them quickly.

Back in 2002, lava streamed into Lake Kivu for several days. The lake didn't explode that time, but it's unlikely that people living on the shore will be that lucky again if lava reaches the lake again. 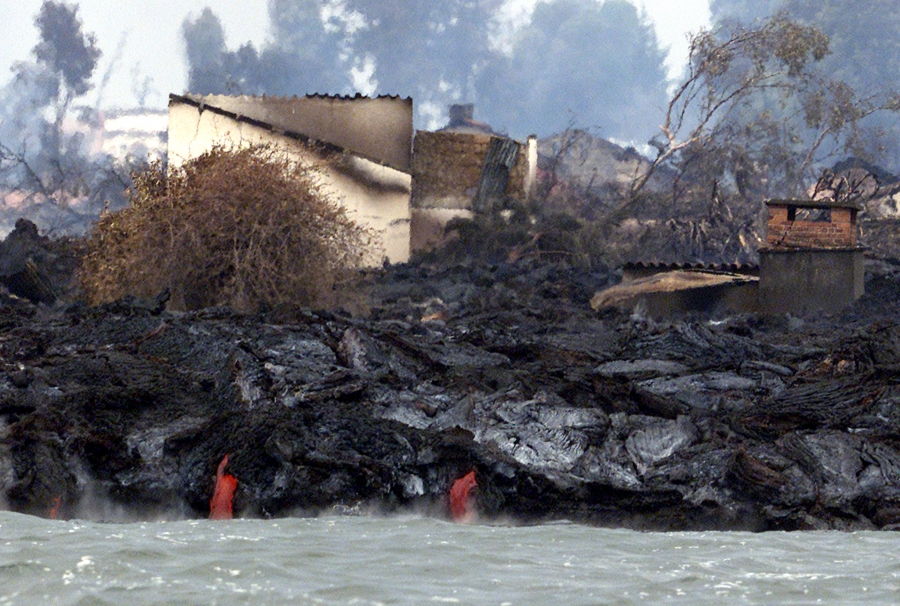 Molten Lava pours into lake Kivu in front of burnt out houses in Goma January 21, 2002.

Willy Mutabazi was only 9 years old when the volcano erupted. He was living in neighboring Kigali, Rwanda, at the time and only recalls some details of that day in January.

"The only thing I remember is hearing screams of neighbors in Rwanda who had people staying in Goma," he says.

Today though, Mutabazi brings groups of tourists up to the top of Nyiragongo every few weeks. About two years ago, he started a tourism company and the mountain has proved to be a popular attraction. A typical trip up and down the mountain takes more than a full day.

"You start hiking in the morning, and you hike for five to six hours, depending on your strength," he says. "Sometimes I take people who need like eight, nine hours. You hike and you get on top. You get a nice view before it gets dark, and then you get an amazing view of the lava ... then you sleep up there in little tents. You camp up there, and then in the morning at 5 or 6 o’clock you wake up and you get a last view. Then you hike down which is another five to six hours."

He says he's not scared to travel up and down an active volcano.

"Maybe I’m a little crazy. If it happens it happens," he says.

He's not wrong, though. Because of the nature of the eruption, Mutabazi and his clients are likely safer on top of the volcano than everyone else living at the bottom.

Plus, it's nearly impossible to tell when the volcano could erupt.

And in the meantime, the team in Virunga National Park — where the volcano is located — is encouraging people to come and see the "spectacular show of new activity." They wrote a blog post on their website explaining why people should book their trip.

"If you’re considering a trip up Nyiragongo, there couldn’t be a better time to come."