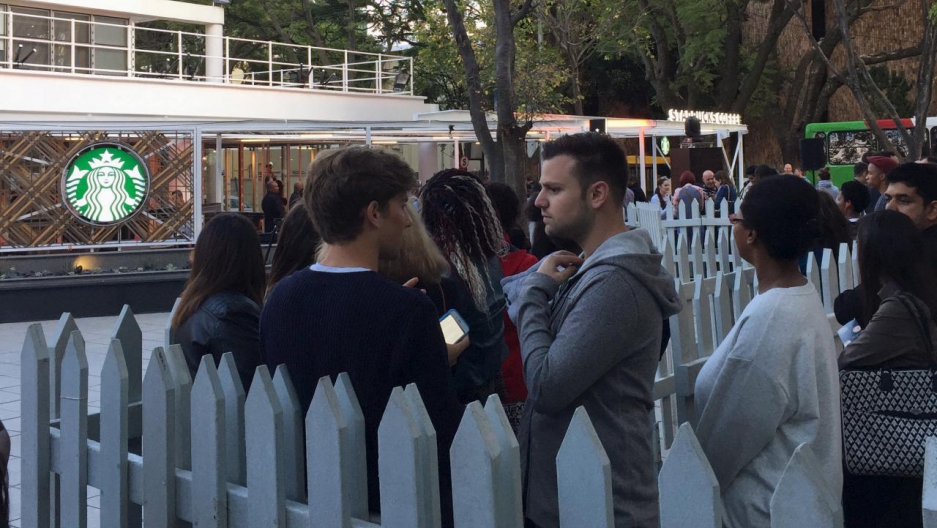 At South Africa's first Starbucks, long lines stretch out the door a week after its VIP opening.

The store in Rosebank, an upscale area of shopping malls and offices in Johannesburg, is the US coffee chain's first-ever outlet in sub-Saharan Africa. Already there are plans for more.

Tshepo Dlamini, 31, lined up shortly after 6 am, but didn't manage to get his Frappuccino before having to head in to work at a nearby bank. Undeterred, he planned to return later in the day to wait again.

Despite South Africa's sluggish economy, there's an appetite for well-known international brands among status-conscious middle class consumers here. For some foreign brands, South Africa also represents a toehold on the African continent, with an eye to future expansion.

Howard Schultz, CEO of Starbucks, visited the Rosebank store and said he was floored by the long lines.

"I have been to many, many Starbucks openings around the world. I have never seen a line like this a week after opening," he said.

There are plenty of other, locally run coffee shops already in Johannesburg — but it's the Starbucks brand name that is attracting attention.

It was a similar story when Burger King first opened in South Africa a few years ago. And the same thing happened with the first Krispy Kreme outlet just around the corner from the new Starbucks.

This #StarbucksSA frenzy reminds of people queuing up for Burger King, months after it opened. We remain colonial subjects!

Domino's Pizza is another recently established American fast-food presence. Fashion retailers including Gap, H&M and Zara have also launched in South Africa over the past few years.

Andy Rice, a branding and advertising expert, told the local 702 radio station that for South African consumers, the appeal of brands like Starbucks is that they are famous. "People want to be associated with celebrity, they want to be in the forefront of experiencing new sensations," he said.

At an invite-only launch event for Starbucks, the night before the April 21 official opening, South African celebrities sampled the coffee, sipped sparkling wine and had souvenir caricatures of themselves drawn on paper takeaway cups (presumably their names were spelled correctly).

At launch of first Starbucks south of the Sahara, in Rosebank, Johannesburg. It's certainly the slickest I have seen pic.twitter.com/C3ZvZboPN6

A second Starbucks location launched this week, at the newly built Mall of Africa set in the suburban sprawl between Johannesburg and Pretoria. The mall's opening Thursday drew 91,000 people and caused traffic chaos throughout the area.

Between 12 and 15 stores are planned in South Africa over the next two years, said Carlo Gonzaga, CEO of Taste Holdings, which owns the local license rights to Starbucks. He estimates that the South African market has the capacity to take 150 stores.

"We certainly believe there is very wide appeal," Gonzaga said at the launch event. "I think it has a broader appeal than people think."