Fadi Abou Hassan, a Palestinian cartoonist in exile in Norway, drew this cartoon to celebrate the impending release of Iranian artist and activist Atena Farghadani.

Iranian artist Atena Farghadani had been languishing in Evin Prison serving a 12-year-sentence for a 2014 cartoon she posted on Facebook that portrayed Iranian lawmakers as humans with the faces of monkeys and goats. 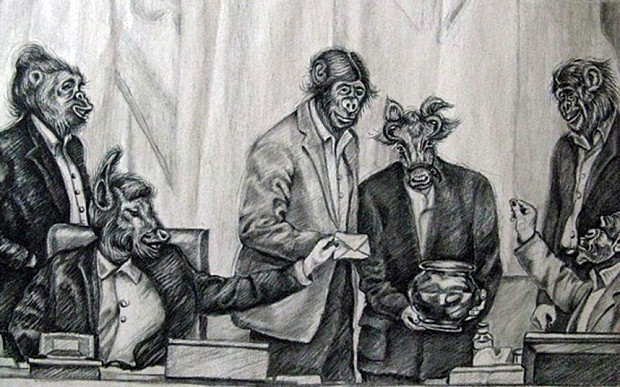 Atena Farghadani posted this cartoon to Facebook in 2014. She was protesting the Iranian parliament's then plan to not allow Iranian women to buy birth control in order to increase the population of Iran.

The cartoon was mocking the members of Iran's parliament, who at the time were calling for bans on women acquiring birth control as a way to increase the population of Iran. But this week Farghadani's sentence was drasticasally reduced and she'll be eligible to be released in a few weeks.

"I believe her lawyer did a very good job defending her," Kowsar says, "not making the case political but doing a legal battle with the court."

Instead of making Farghadani an international cause célèbre, Moghimi focused on the intention of her cartoon. In the end, he was able to get the Iranian appeals court to acquit Farghadani of "assembly and collusion against the state" and he also had her sentence for "insulting the Supreme Leader" suspended.

A nine-month sentence for "insulting" the current president and other Iranian officials was reduced to a fine. That left just an 18-month prison sentence for "propaganda against the state" and that term is up as of early May.

Kowsar also spent time in Evin Prison in 2000 for a cartoon that offended Iranian authorities.

Eventually he resettled in the United States and now works with the human rights group Cartoonists Rights Network International to help cartoonists around the world who are persecuted for their craft.

He says 29-year-old Farghadani is not strictly a cartoonist but that didn't matter.

"We had not seen any cartoons from Atena in the past but this specific artwork was a cartoon so that's why CRNI started supporting her," he says. In 2015, CRNI awarded Atena Farghadani their annual Courage in Cartooning Award.

CRNI, led by Kowsar, also wrote an open letter to the Iranian president, Hassan Rouhani. "Though we knew that the Iranian president does not have anything to do with the judiciary, we thought maybe his office was able to possibly lobby on behalf of all the organizations that were signatories to that campaign."

Kowsar and CRNI sought out IFEX, a clearinghouse of more than 80 freedom of speech organizations around the globe. "Through IFEX we were able to get lots of signatures and also many cartoonists — well-known artists — actually signed that letter and it was sent to the Iranian president."

A separate "drawing" campaign began as well. In 2015, visual storyteller and Washington Post columnist Michael Cavna created the hashtag #Draw4Atena. Cartoonists around the world responded. Click the image below to see some of those responses.

The Michael Cavna cartoon that kicked off the #Draw4Atena campaign in 2015.