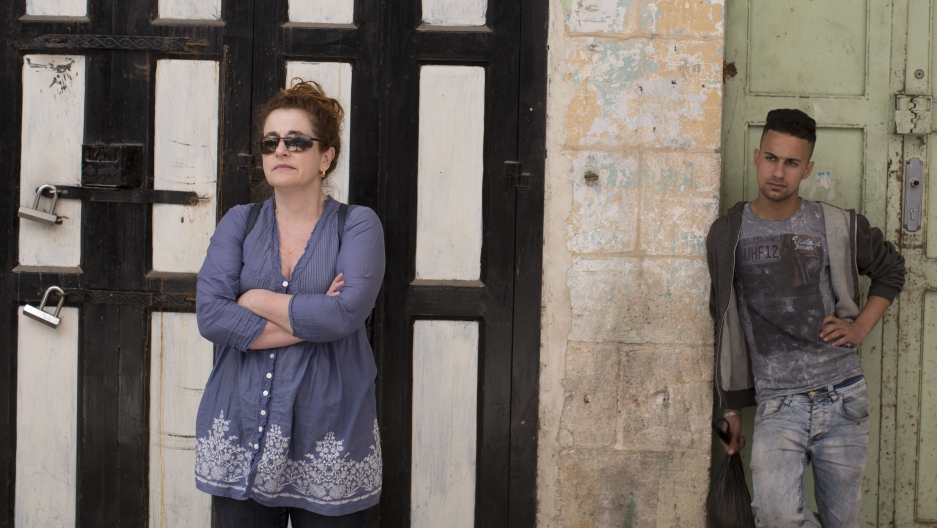 Novelist Ayelet Waldman and a Palestinian man in Hebron. “For most of my life, I loved Israel, I longed for Israel, I planned to live in Israel,” she says.

Bestselling author Ayelet Waldman has been called America’s most outrageous writer for her frank books and essays on motherhood. This month, she stirred up outrage among some US Jews on Twitter for her tweets about Israel.

After this month’s bus bombing by a Palestinian in Jerusalem, Waldman said the “terrible violence is an inevitable result of a brutal occupation.” That drew rebukes from prominent journalist Jeffrey Goldberg, among others.

The Jews had it coming, apparently (in which @ayeletw assumes that Palestinians are by nature violent): https://t.co/Zp0WdPyTnP

Israel’s occupation of the West Bank is the subject of a book project Waldman is editing with her husband, the Pulitzer Prize-winning novelist Michael Chabon. Twenty-four novelists from around the world are visiting the region to write essays for a collection to be published by Harper Collins next summer to mark 50 years of the occupation.

On a recent trip to Israel, Waldman discussed her complicated relationship with the state.

Born in Jerusalem, Waldman left Israel with her family when she was just a few years old. But Israel didn’t leave her.

“For most of my life, I loved Israel, I longed for Israel, I planned to live in Israel,” she says.

Waldman grew up in the US, but during high school she spent summers in Israel, and in college, she spent her junior year studying there. After she graduated from Wesleyan University, she moved to Israel to live on a kibbutz.

“And that’s when the cracks started in the wall,” Waldman said.

As a feminist, Waldman said, she noticed there wasn’t true gender equality on her kibbutz. She moved back to the US and enrolled in Harvard Law School; she was in the same class as Barack Obama.

She became a federal public defender for a few years, representing drug dealers and bank robbers. Eventually, she became a writer. As her political consciousness grew, Waldman says, she couldn’t stand reading about Israel’s treatment of Palestinians.

“The more I learned, the less I could tolerate thinking about Israel,” Waldman says. “I really did spend the next 20 years trying to put it out of my mind. I mean, Bibi [Benjamin] Netanyahu would be in the news, and I would curse him, and that’s about as far as it got.”

Things changed two years ago, when Waldman was invited to a writer’s conference in Jerusalem. She went on her first trip to the West Bank city of Hebron, and what she saw shocked her: the reality of some hardline Israeli settlers living among a Palestinian urban population.

“Horrific, this graffiti — you know, ‘Death to Arabs,’” Waldman said.

When she left Hebron, she visited Israeli writer friends in liberal, cosmopolitan Tel Aviv — and felt at home with them.

“It was the moment of feeling at home with them that brought me to the crisis,” Waldman said. “Because, if I feel at home with them, if I feel like I am somehow connected to this place, well then now it’s my problem. Now it’s my responsibility. I can’t just go home and forget about it like I did for 20 years. Now I have to actually do something.”

Waldman and Chabon invited novelists from around the world to come to Israel and the Palestinian territories to write essays about what they see. Authors participating include Geraldine Brooks, Dave Eggers, Rachel Kushner, Lorraine Adams, Tash Aw and Mario Vargas Llosa. 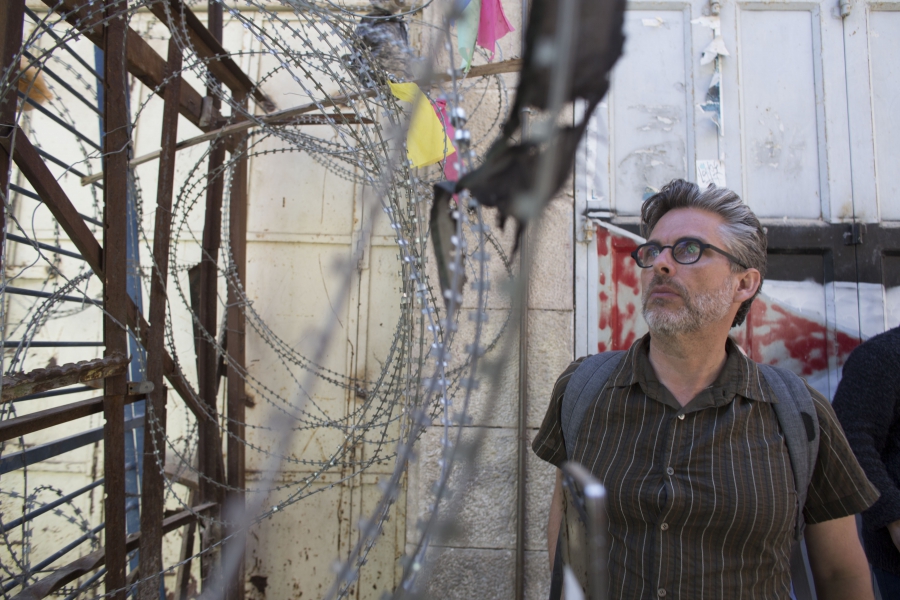 One afternoon, Waldman, Chabon, Brooks and Kushner passed through security checks to enter an Israeli military court where Palestinian teenagers appear before a judge, accused of offenses like carrying a knife at a military checkpoint or throwing stones at Israeli cars. As a lawyer, it’s a topic that interests Waldman, and she’s writing an essay about it for the book.

The book project is organized in part by Breaking the Silence, an Israeli veterans group that’s controversial in Israel because of its criticism of the occupation of the West Bank.

Waldman said she knows the book project will alienate some of her readers, many of whom, she said, are American Jewish women.

What she intends to gain is a collection of essays from top writers with something new to say about a military occupation 50 years in the making.