Sabeen Mahmud was murdered in Pakistan in 2015.

Early Sunday morning in Karachi, a small, eclectic crowd converged at The Second Floor (T2F), the iconic coffee shop and cultural hub founded by my young friend Sabeen Mahmud in 2007.

This time, we weren't there to participate in a cutting-edge arts event, but to join Sabeen’s mother, Mahenaz, in planting a baby amaltas — a yellow-flowering native tree — in the grassy divider near the traffic light where Sabeen was killed last year.

“I have been dreaming of this moment for months,” Mahenaz told me serenely, smiling. “Every spring it will flower in memory of Sabeen.” 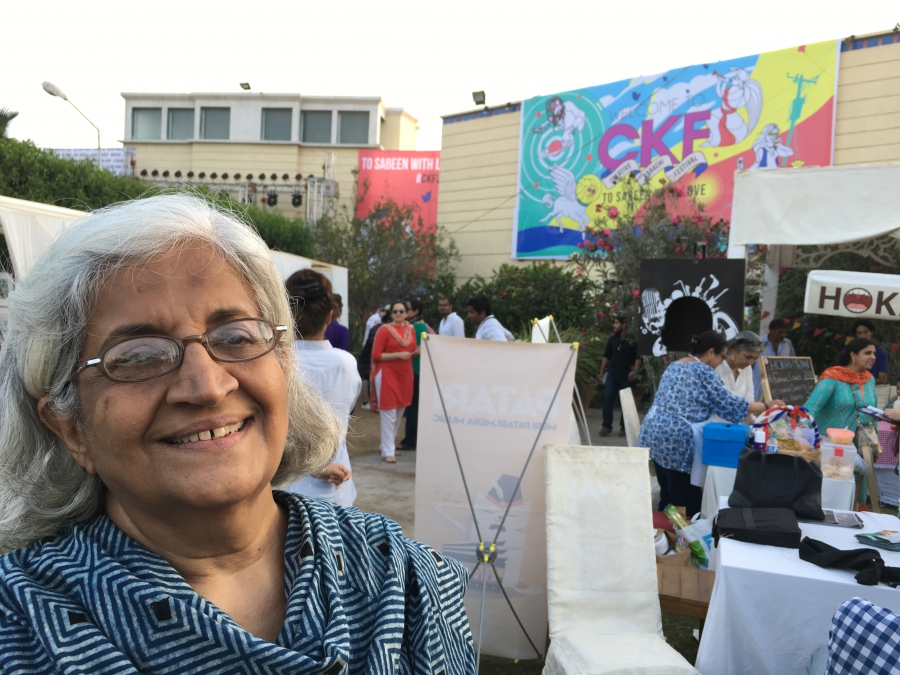 Mahenaz Mahmud was also injured in the murder of her daughter.

Mahenaz had been in the passenger seat next to her only child, going home after an event at T2F on April 24, 2015. Their driver was in the back seat — Sabeen often preferred to drive herself. As the vehicle stopped at a red light before turning onto the grandly named Sun Set Boulevard, two young men on a motorcycle drew up by the car — “too close for comfort,” remembers Mahenaz.

The pillion rider raised a hand holding a 9mm pistol and fired five shots directly at Sabeen’s head and chest. Within seconds, the motorcycle vanished. Sabeen died instantly. A bullet that passed through her arm hit her mother. Another ricocheted in the car and got lodged in Mahenaz’s back, where it remains as a permanent reminder of her loss.

The amaltas is being planted near a gray flagstone inscribed with Sabeen’s name, in elegant Urdu calligraphy and in English, as well as the years she walked this Earth, 1974-2015. One by one, led by Mahenaz, Sabeen’s friends put fistfuls of earth into the tree bed, just as many had done at her grave a year ago — a symbolic ritual at Muslim funerals. Dust to dust. 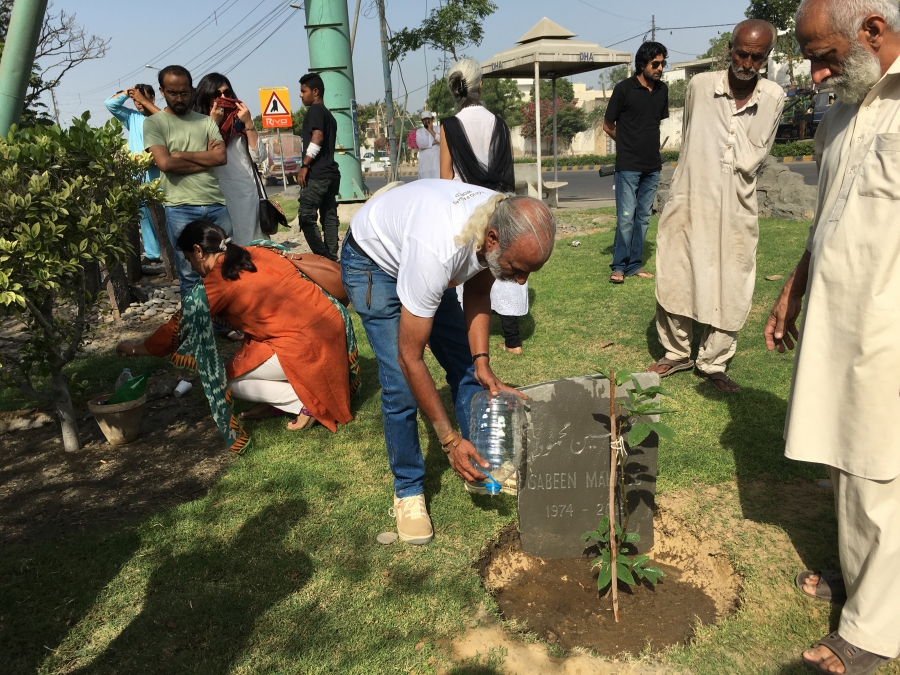 Friends and family plant the memroial to Sabeen, who was killed in Karachi in 2015.

After watering the tree, we walked back to T2F. White sheets covered the floor, with colorful bolster pillows against the red brick walls of the cool interior. A long table against the back wall looked festive, laden with T2F’s mugs, a big flask of hot water, plates, sandwiches and coffeecake brought by Sabeen’s friends.

Walking in, Mahenaz stopped to take in the scene, then smiled and thanked the old man who had set it up. Mamoo (uncle) is what she respectfully calls the white-bearded Mir Daad, who has worked for her for the past 30 years. He was also Mamoo to Sabeen, and to all the T2F community.

Mamoo is among the thousands of internal migrants who flock to what is now one of the world’s largest cities, with a population of more than 23 million, seeking work. A city that never sleeps. A city that Sabeen passionately loved, with its sprawling concrete jungles, undulating shoreline along the Arabian Sea, flowering trees and indomitable spirit.

Mamoo hails from a village near the garrison town of Abbottabad, now infamous as Osama bin Laden’s hideout, some 740 miles north of Karachi. He told me quietly that he had known Sabeen since she was 12.

T2F is where Sabeen’s funeral procession began last year — as Mahenaz said, it was her home and the T2F community was her family. 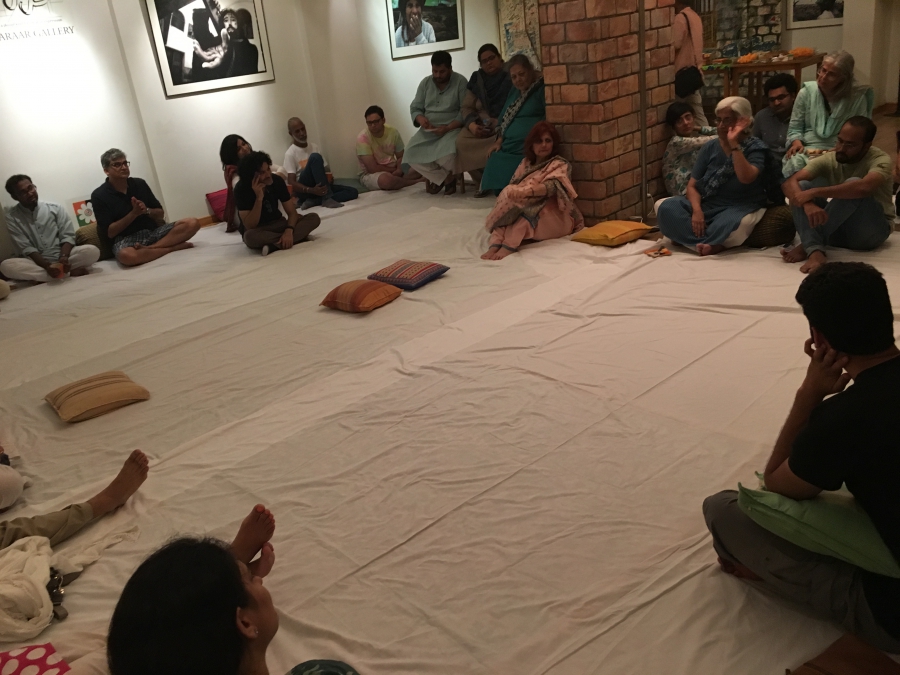 White sheets covered the floor at T2F during the memorial service.

Then too, Mamoo spread white sheets on the floor, like people do at their homes when friends and relatives come to pray for a departed soul.

At T2F on Sunday morning, at Mahenaz’s request, those gathered shared stories about Sabeen. But why does Sabeen matter? She was not only an icon of the progressive and democratic ideals toward which Pakistan should aspire, but also provided a platform and a space for others sharing these aspirations.

How does Mahenaz keep going? Because she knows that Sabeen would hate for her to give up.

Sabeen’s inclusive vision and respect for all life made T2F not just a safe space for Karachi’s English-speaking, Westernized youth, but also for its bun kababs — those from more traditional backgrounds with less exposure to the West, but who share those aspirations.

One of them is a young lawyer who became a social and political activist, Mohammad Jibran Nasir. Nasir wrote a moving testament to Sabeen’s enabling vision and proactive approach.

As Sabeen wrote in an essay titled "Creative Karachi," having “an open mind and an open-door policy” had allowed the T2F community to “fulfill dreams beyond my wildest imagination."

“I’ve never known a space in Pakistan to be so inclusive of class, gender, sexuality, religion, ethnicity, and cultural scope,” wrote the novelist Uzma Aslam Khan. “Her death cannot mean the end of the dream she made real: An inclusive public space where it is possible to evolve — regardless of your background and beliefs, or who you know and don’t know.”

The mix of people was evident at the buzzing, two-day Creative Karachi Festival (#CKH2016) held in her memory earlier this month. People young and old from around the city thronged the sprawling grounds of the Alliance Française, braving a heat wave. About 10 p.m. on Sunday, the time Sabeen was shot dead last year, there was a moment of silence for her. Soon afterward, Zoe Viccaji, one of Pakistan’s top fusion artists, rocked the concert venue. She was among more than 150 artists who contributed their time and skills to the festival.

The event at the French cultural center took me back to the 1980s when Alliance Française and the Goethe Institut were two safe spaces in Pakistan for political dissent and activism expressed through cultural activities — street theatre, seminars, discussions — during the military dictatorship of Gen. Zia ul Haq. Pakistan was then a frontline state in the US Cold War against the Soviet Union in Afghanistan.

The Mujahideen unleashed in those years morphed over time into various other militant groups, including al-Qaeda and the Taliban.

In Pakistan, religiously motivated militants are linked with criminal gangs around the country — gunrunners, kidnappers, land and drug mafias and murderers for hire. A young business school graduate who has confessed to killing Sabeen has also confessed to various other murders.

Since 2007, T2F was a space for political activism and cultural expression, like Alliance Française and the Goethe Institut were in the Zia years. Sabeen’s friend Marvi Mazhar, a conservation architect who now runs T2F, says closing it down would have been like a second death in the city.

The risks remain, because, as activist and environmentalist Tofiq Pasha put it, “every now and then, they slap us down to tell us to stay within our boundaries.” The festival for Sabeen took place in the enclosed, secured premises of Alliance Française, not in a public park.

Sabeen matters because she gives people the courage to carry on despite the risks. As she famously said, “Fear is just a line in your head — you can choose which side you want to be on."

There are no real spaces anywhere for those who challenge the status quo, added another activist friend, Amima Sayeed, pointing to the US. She recalled Noam Chomsky talking about how dissenting voices are forced to stay within their boundaries, and how Chomsky’s own voice is marginalized, “allowed to speak at alternative platforms, but never really given any mainstream space.”

What Sabeen reminds us to do is to determinedly keep claiming our spaces and to refuse to accept the status quo.

See the different projects, including T2F, that Sabeen started.

Writer Bina Shah has launched an effort to get a street in Karachi named after Sabeen.