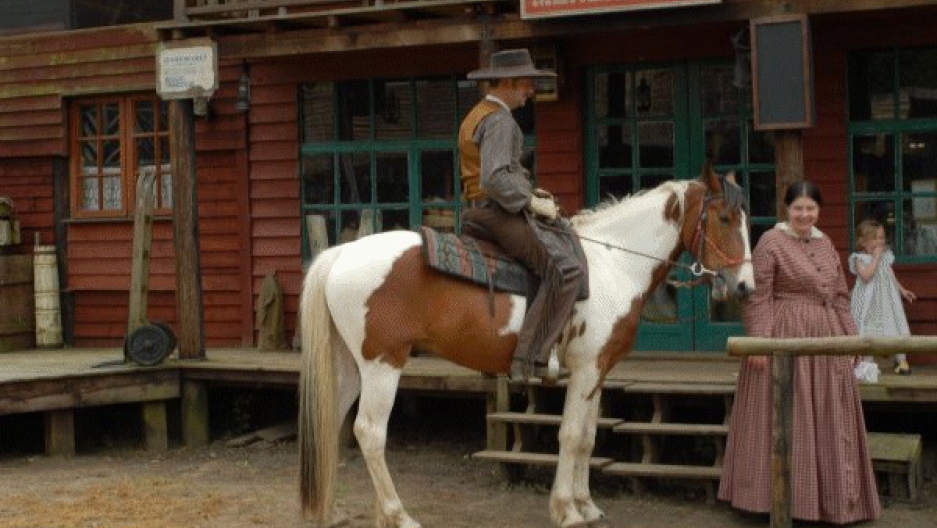 Laredo, UK was created by an Englishman enamored with Western lifestyle.

Journalist Linda Rodriguez McRobbie is one of the few non-members who has visited the town of Laredo. Laredo is among the last purpose-built "Old West" town still standing and regularly occupied — and almost certainly the only one in the UK.

She can't disclose the exact location of the town but she says it's located about 35 minutes outside of London.

"I'm not exactly sworn to secrecy," she says, "but I can tell you that it's closest to a station called Longfield, but beyond that, I can't divulge the location."

McRobbie explains that the members of Laredo are very protective of the space they have created. That's because their contact with the press "[hasn't] been terribly positive."

One member told McRobbie that the last few articles have made them "look like a load of nutcases — eccentric nutcases living in sheds."

As McRobbie writes in Atlas Obscura, Laredo is not your typical English town.

"It's nestled in these trees in a way ... just in front of these trees that loom up above it," she says. "From far away, it can just look like a collection of farm buildings, but when you start to approach you realize that this is not what farm buildings in England look like."

The day that McRobbie visited was "very English-ly overcast," and it was "a little disconcerting because you're still in the English climate ... it's wet, it's green." At the same time, having grown up in Texas, McRobbie felt the scenery was familiar.

Laredo is the project of an Englishman called John "JT" Truder. He was a pig farmer in Kent who grew up with Hollywood Westerns. He got intensely interested in the movies and the Western lifestyle.

"He was very much enamoured with the ideal and the mythos of the American West," says McRobbie.

At one point, with the help of some of his friends, Truder started to create Laredo. At first it was just a shed and it grew from there.

"They started to find that the more more people were interested in hanging out with them in Western clothes and experiencing the Western lifestyle, the more room they needed to create," says McRobbie.

Today Laredo is a collection of 24 buildings along with a few log cabins. Every weekend, members of the Laredo Western Club will show up at the town, put on period-correct clothing, stash away their cell phones and immerse themselves in the 19th century American West.

There are other Western-style towns across Europe, McRobbie reports, but those were mainly created to be used as film sets. Laredo was the real deal, inasmuch as a town in England can be the Old West.

Truder passed away three years ago, but his children keep up their father's passion. They have now started to let some filming be done in Laredo, mainly to cover the cost of keeping up the town.

But on the day she visited, she noticed there was one key element missing: tumbleweeds.