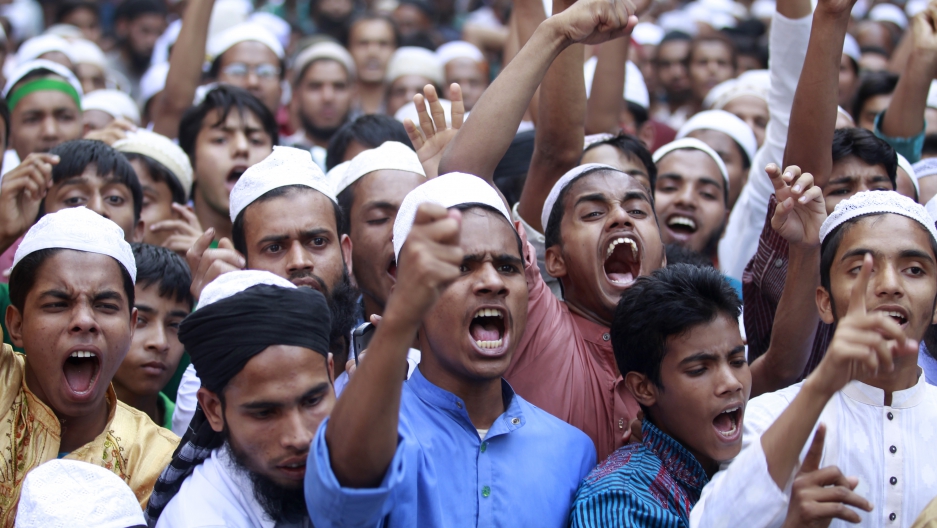 Activists of the radical Islamist party Hefajat-e-Islam in Bangladesh demanding capital punishment for a group of bloggers in 2013.

But Xulhaz Mannan went out on a limb.

With his colleague Tonoy Mahbub, Mannan helped build a vibrant alternative community in a place where homosexuality is illegal and government officials are increasingly preoccupied with appeasing the Islamist radical right.

"[Mannan and Mahbub] were very socially aware of who they were and what they believed in, and they knew that there are many others like them who just live their lives in darkness," says Bangladeshi blogger Ishtiaq Rouf.

Mannan was so outspoken he's been called the "Harvey Milk of Bangladesh," referring to the California politician who, in 1977, became one of the world's first openly gay elected officials and was murdered a year later.

He had also worked with the US Agency for International Development; State Department spokesman John Kirby called him "a beloved member of our embassy family."

For the past two years, Mannan had been prominent at outdoor rallies in support of LGBT rights. Police detained some of those who marched in the demonstrations on April 10. Ten days after Mannan demanded the release of those activists, a group of men with machetes barged into his home in Dhaka.

The assailants hacked both Mannan and Mahbub to death.

A banned group affiliated with al-Qaeda claimed responsibility for the attack, according to the LA Times, saying the slain men “were working day and night to promote homosexuality ... with the help of their masters, the US crusaders and its Indian allies.”

It's just the latest in a string of attacks in Bangladesh targeting bloggers, secular journalists and academics. Rouf says local Islamist groups are to blame, and the government is taking little action.

"There's no secular message," Rouf says. "If you look at even the leftist parties in Bangladesh, they have a religious element to it. And the secular parties, they're appeasing to these right-wing people, completely giving up their secular values."

Rouf says extreme Islamists in Bangladesh have circulated a "hit list" of 84 "atheist bloggers" they are targeting.

"There's a photo from four or five years ago that five people took in a bookfair," Rouf adds. "They've all been killed, and you know they just went one-by-one," he says. "All these killings — these are not done by radicals who cannot read, these are people who are educated, who know how to use computers, and internet and that's why they're ahead of the police at all times."

That constant insecurity, Rouf says, leaves many Bangladeshi bloggers and LGBT activists with "no other option" but seeking asylum abroad.