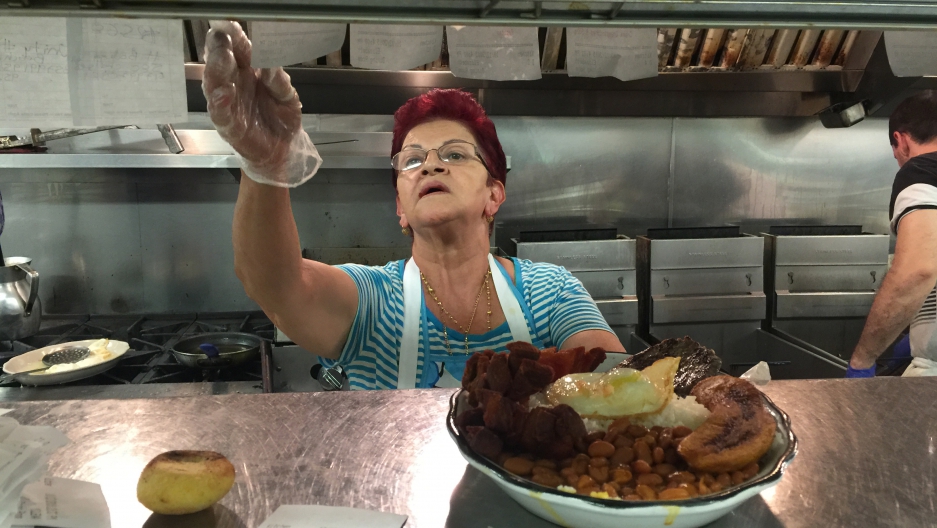 The owner of El Peñol restaurant in East Boston with a bandeja paisa.

A nondescript restaurant door in East Boston opens up another world — one where many people speak Spanish with the particular accent of a small Colombian mountain town named Donmatías.

“Donmatías was this little village with agricultural economy, like milk, dairy products, pork,” says Jorge Caraballo, a graduate student from a Colombian city near Donmatías. He's working on a master’s project at Northeastern University about the unique way Donmatíans recreated their community in East Boston.

People now say there are more Donmatíans in East Boston than in Colombia. They’re among the latest wave of immigrants to call East Boston home. The area has a long relationship with immigrants, once serving as a springboard for Irish and Jewish newcomers.

But East Boston’s tradition of incubating new Americans might be changing, as housing costs rise in Boston and young professionals move in. That trend could break up the relocated Donmatíans, a community that’s already been disrupted.

In the 1960s, Donmatías became an unlikely frontline of a struggle within the Catholic Church. A liberal priest devoted to liberation theology — at the time a new, seemingly radical path aimed at helping the poor — was assigned to Donmatías, which was a church-centered community. The priest organized poor farmers, angering the handful of rich families, who subsequently asked the church to remove the priest. The New York Times and Time reported the priest refused to leave. Instead, he set up his own services, school and workers' cooperative.

Eventually there was violence. A rich man was killed and wealthy families fled the town. The economy of Donmatías died. People started relocating to Massachusetts, where they could find work. The move to East Boston became almost a coming-of-age tradition in Donmatías.

They’re still coming — some without documentation, like a young woman named Daniela. She moved to East Boston three years ago to be with her boyfriend, and worked at a wire transfer business, a bakery and a grocery store.

Inside Billares Colombia, a pool hall in East Boston where many of the patrons are Donmatians.

Remittances from the Donmatíans in East Boston have rejuvenated the original town in Colombia. Daniela says family back home are constantly asking her to send name brand and designer stuff, sometimes because someone else on their street with a relative in East Boston has it.

Unfortunately, money’s tight, and Daniela doesn’t know how long it’ll make sense to stay here. Boston is one of the most expensive rental markets in the country. Daniela pays $650 a month to share a three-bedroom apartment; plus utilities and internet service.

Like many East Boston Donmatíans, Daniela watches live streams of religious services from the town church in Colombia, and hopes to go back home one day. But that devotion to the original town can mean some Donmatíans don’t have deep loyalty to East Boston, which frustrates the few fighting to preserve their relocated community.

Donmatías transplant Adrián Cadavid owns Café Gigú in East Boston. He watches housing prices rise and worries there’s nothing anyone can do to keep the American Donmatíans from slipping away. Cadavid says as a community leader, he thinks about this a lot.

“This Latino diversity is what makes this neighborhood nice and rich,” he says. “That’s beginning to get lost.”

Cadavid says the only way to combat gentrification in East Boston is for wealthier Donmatíans like him, who own businesses and homes, to resist selling to developers who want to put up more luxury condos, which drive poor Donmatíans out.

Otherwise, just as the original Donmatías is coming back to life, the East Boston Donmatías could fade away.