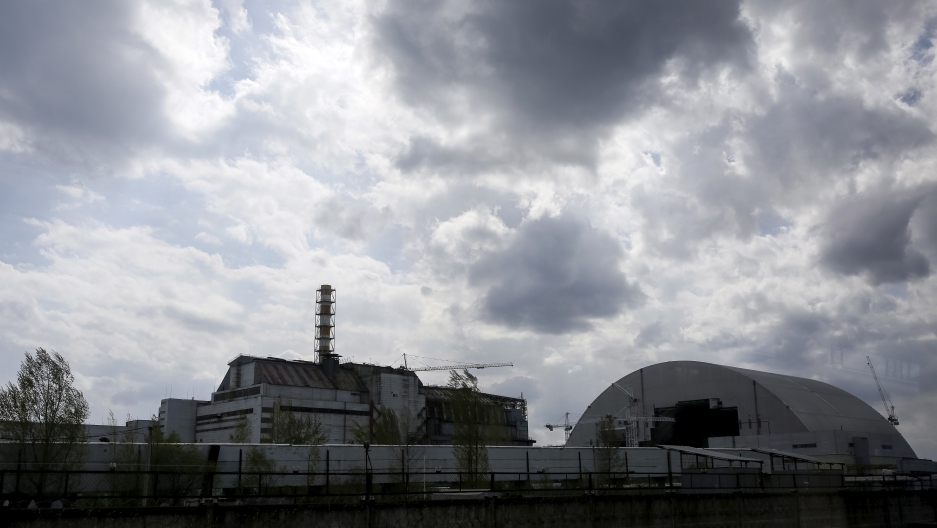 A view of the damaged reactor at Chernobyl, April 2016

On April 26, 1986, a routine test on reactor No. 4 at the Chernobyl nuclear power plant went horribly wrong. The reactor in Ukraine, in the old Soviet Union, went into meltdown. It became the world’s worst peacetime nuclear disaster.

A power surge during the test led to a rupture and a series of steam explosions. There was a massive leak of radiation, leading to fallout eventually landing all across Europe.

Dozens died in the struggle to contain the disaster. Hundreds of thousands of people were evacuated.

One family was lucky. “My grandfather was a general in the Soviet army,” recalls writer and journalist Natalia Antonova. “From what I understand, we found out sooner than the general public, but later than a few other officials.”

“And as soon as he heard that this was happening,” she says, “they put me on a train to St. Petersburg with my mom.”

The Soviet authorities attempted to suppress news of the meltdown at Chernobyl and were slow to evacuate people from the disaster area. The world only became aware of the problem when the radiation cloud set off alarms at a reactor in Sweden.

Russians were also directly impacted by Chernobyl. The explosion sent up a cloud of radioactive material that blew into parts of neighbouring Russia and Belarus, and Moscow managed the crisis from the Kremlin. Russian President Vladimir Putin said today the Chernobyl disaster was "a grave lesson for all of mankind.''

“I was too young; only a couple of years old,” Antonova says. “But I do know from my mom’s stories and my dad’s stories that when the May holidays started in the Soviet Union, most people were still not aware that something disastrous had happened.”

“All I remember,” Antonova adds, “is being in St. Petersburg and dancing with my toy bear and noticing everybody is really sad.”

Russians, as a rule, however, commemorate their Soviet sacrifices: troops that worked to remove contaminated materials, scientists and engineers who helped with disaster management, coal miners who built a concrete foundation to prevent radioactivity from leaking below the reactor, and even photographers who were on the scene to document the destroyed reactor and the relief operation.

Moscow-based reporter Charles Maynes says the TV news there features stories about the "liquidators" — people who helped in the disaster — but there’s little or no coverage of the Chernobyl anniversary memorial events that were held in Kiev.

“If you look at the 25th anniversary of the Chernobyl disaster, Russia and Ukraine were side by side. It was a real shared event," Maynes says. "Now it's really a separate event. The Russian and Ukrainian relations are so bad these days ... this is unquestionably a Soviet tragedy, but the sense you get is that Russia would kind of prefer this to be Ukraine’s event.”

Though Russia, according to Maynes, seemingly would like to leave Ukraine's side in remembering the tragedy, back in Kiev, Antonova’s father refused to leave 30 years ago.

“He’s an engineer by trade, and it was really personal for him," she says.

He had done his internship at Chernobyl. He was not working there when the accident happened, “but it triggered a lot of emotions for him, and he at least wanted to stay in the city, because he didn’t feel like abandoning his home, and he didn’t want to abandon the area in a time like this.”

Kiev was spared from radiation.

Antonova said her father told her that “the creepiest thing was that there were no children that summer. It was like the summer without children.”

“That really bothered him,” she adds. Anyone who could, had gotten their children out. “He said it was really upsetting because you’re coming home from work in the evenings and it’s so quiet. And there’s this tension in the air and nobody wants to talk about it. But nobody can ignore it. It really left a mark, an impression, on him for a long time.”