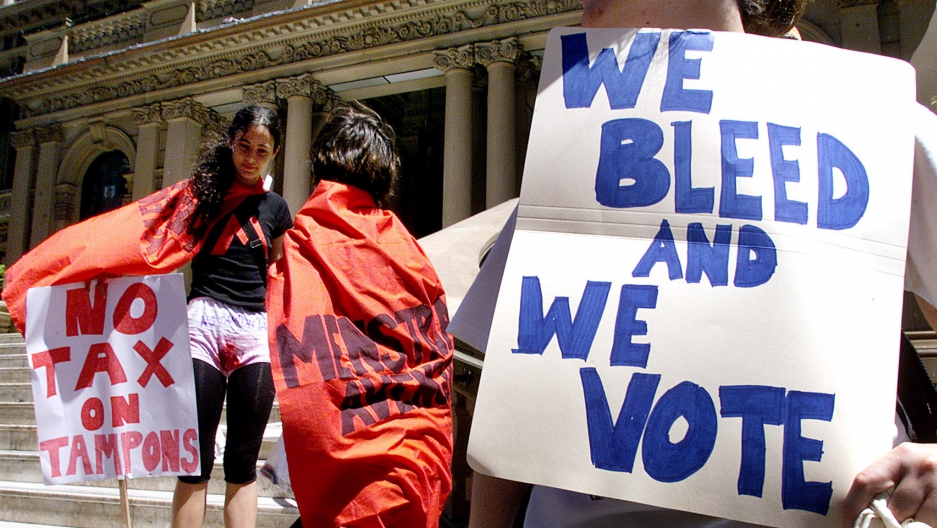 Protesters against a tax on tampons hold placards in Sydney, Australia.

Kiran Gandhi had been training a year for April 26, 2015. But that morning, her body plunged her into a physical and ethical quandary.

It’s something every woman faces, whether on a mundane day or one as important as her graduation or wedding.

For Gandhi, it was the London Marathon. Her period came as she was lining up at the starting line.

The Los Angeles artist, activist and drummer for musician M.I.A. knew that if she were to wear a tampon or pad, it would cause uncomfortable chafing through the 26.2-mile run. And she wouldn’t have a private place to change it along the course.

She decided not to wear a tampon or pad that day. As she crossed the finish line in blood-soaked leggings, she became an icon in the growing movement to normalize a biological function to which society attaches a stigma and burden.

“I realized that had I chosen to wear a pad or a tampon, it really would have been for somebody else,” Gandhi says. “It wasn’t what I wanted to do. I was much happier just running the way I was comfortable, with no foreign object in my body.”

“I knew that if I ended up showing a stain, it would embarrass other people, and that I was supposed to feel shame,” she added. “… If I run bleeding freely and letting my blood show … it was actually a very radical, feminist statement.”

Predictably, internet commenters derided Gandhi for being “gross” and “disgusting.”

But, she says, “it really started a global menstrual conversation that was so enjoyable and so amazing to watch.”

The societal obstacles American women face surrounding periods range from a “tampon tax” to uproars over whether menstrual products should be advertised on New York City subways.

But movements in several American cities and states are looking to upend the status quo and achieve “menstrual equity.” Though National Public Radio called 2015 “The Year of the Period” and Cosmopolitan dubbed it “The Year the Period Went Public,” 2016 may become even a bigger year for period progress.

Of the 45 states that charge sales tax, only five do not tax menstrual products such as tampons and sanitary pads. Most states have exemptions for “necessities” such as food from the grocery store, medical purchases such as prescription drugs and prosthetics, and sometimes even clothes. But products to keep women clean and sanitary during their periods do not rise to the level of a necessity in the tax codes of 40 states and the District of Columbia.

The office of California Assemblywoman Cristina Garcia, who co-sponsors legislation introduced in January to eliminate her state’s tampon tax, estimates women who menstruate spend $7 per month for 40 years of tampons and sanitary napkins, adding up to more than $3,000 during a lifetime.

In New York, five women who filed a class-action lawsuit in March claim the “tampon tax” violates the equal protection clause and that it discriminates against women. The suit points out that New York provides sales-tax exemptions for items such as Rogaine, foot powder, face wash, Viagra and incontinence pads — but not menstrual products. Ten states that tax tampons do not tax candy or soda.

“It is the vestige of another era and now it is time to end it,” the lawsuit says of the tax. “The Tampon Tax is irrational. It is discrimination. It is wrong.”

This month, two more lawsuits were filed in California and Ohio.

Even President Barack Obama was unaware of the tax when it was put to him by YouTube vlogger Ingrid Nilsen.

“I have no idea why states would tax these as luxury items,” Obama said during the recent YouTube interview. “I suspect it’s because men were making the laws when those taxes were passed.”

When the issue came to the attention of Jennifer Weiss-Wolf, vice president for development at the Brennan Center for Justice and a champion of the class-action lawsuit, it sparked a new avenue of activism for her.

“I think I had the same reaction most people do: Wow, how did I never think of that?” Weiss-Wolf says.

Since then, she has written extensively about the issue for publications from The New York Times to Ms. Magazine and co-sponsored a national petition to state legislators calling for an end to the tampon tax. The petition has amassed more than 58,000 signatures.

It also sparked action — to date, 14 states have introduced legislation to eliminate their tampon taxes. The first was California, introduced by Garcia, a Democrat, and Republican Ling Ling Chang. Measures in Utah and Tennessee have since died. Tennessee lawmakers say they feared losing millions in state revenue should they stop taxing hygiene products.

Cities are taking their own initiatives, too — Chicago passed an ordinance eliminating the city's portion of sales tax on menstrual products, and the District of Columbia is considering a similar measure.

Weiss-Wolf calls it “the makings of a movement.”

It’s not just the fact that some states exempt Viagra and not tampons — it’s a health issue that affects women’s ability to be productive in their school, work and home lives, Weiss-Wolf says.

When women are deprived of access to menstrual products, “it actually debilitates them and their ability to be the most productive members of the citizenry as they can,” Weiss-Wolf says. “They are an absolute necessity for half the world. [But states] consider it a hand-out to get a tampon.”

A proposal to eliminate the tampon tax, introduced just last month, passed in both houses of the New York state legislature, with support from Gov. Andrew Cuomo.

The class-action lawsuit, led by Weiss-Wolf, would enable people who purchased menstrual products in the last two years to receive a rebate — $14 million in sales tax divided among these buyers, admittedly amounting to a “couple of bucks” for each recipient.

Weiss-Wolf is helping establish a fund where, should the complainants win the lawsuit, people can donate their rebates to benefit homeless shelters.

Even if states repeal their tampon taxes, some people still won’t be able to afford menstrual supplies.

Through volunteering at homeless meal programs and reading about the challenges transient people face, Margo Seibert and Caroline Angell learned last year that tampons and pads ranked among the highest needs of women in poverty.

Homeless shelters aren’t always adequately stocked with menstrual products, and women on the street often don’t have easy access to bathrooms. So they use T-shirts or ripped cloths to soak up their blood or they’ll stain what few clothes they have, women told Cosmopolitan.

Learning of those hardships prompted Seibert and Angell to start Racket, a New York City-based organization that collects tampons, pads and sanitary wipes for people in need.

“We feel it’s our duty to make a racket about the issue,” says Seibert, an actress and a plaintiff on the New York tampon-tax lawsuit. “We believe every woman is entitled to have a shame-free period.”

The women collaborated with members of the Broadway community for their first drive in October 2015 and collected 10,000 products in 10 days, Seibert says.

They have since launched a #periodswithoutshame hashtag on social media and organized several more drives. Through their efforts, Seibert says, women and men alike have grown aware of how crucial menstrual products are to low-income people.