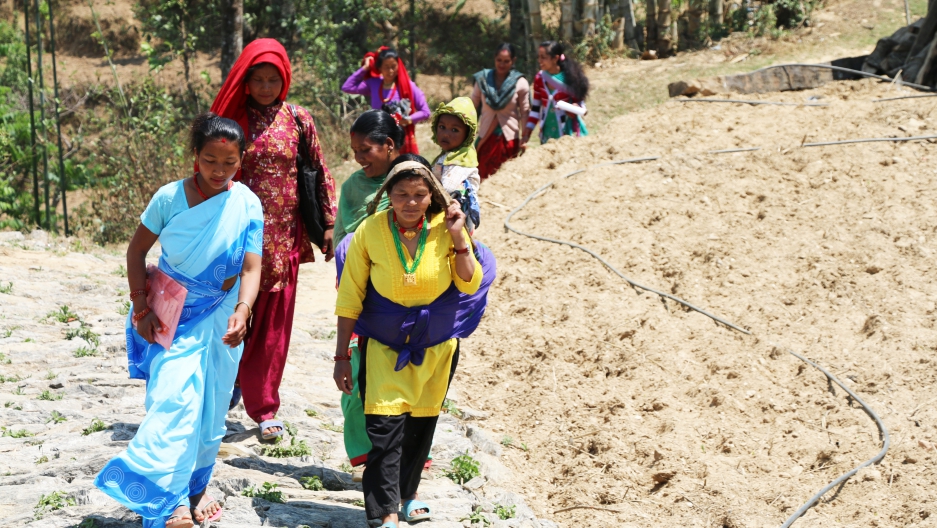 Women community health workers in Dolakha district walk up the hill for a monthly meeting inside the under-construction health center. The new building will replace the clinic destroyed in the earthquake last year.

Inside a small blue tent perched on a hill above the tiny village of Dadagaun in Nepal's Dolakha district, mothers and children line up to see a lone health worker seated at a wooden desk. There are mothers with eye infections, and children with tonsillitis and respiratory illness. Flies are everywhere.

“It’s so crowded,” says the on-duty health worker, Dilip Yadav. “Everyone wants to be treated first, so it’s hard to concentrate. While I’m listening to one patient, another starts to talk to me, and I mix up their symptoms.”

Occasionally, elderly men join the crowd. A few of them are just here to watch the mayhem. It’s like they’re watching reality TV.

“It’s been very difficult to treat patients in a tent,” Yadav says. “There’s the possibility of spreading disease in the crowd. And I’m not able to ask enough questions to each person because there are so many patients coming in.”

This remote and mountainous region a two-day journey east of Kathmandu was hard-hit by the quake. The health center in the village of Dadagaun serves the wider area of Jugu. The clinic was damaged in the initial earthquake, and when another quake hit a few weeks later, the entire building collapsed. Yadav was inside his office at the time. 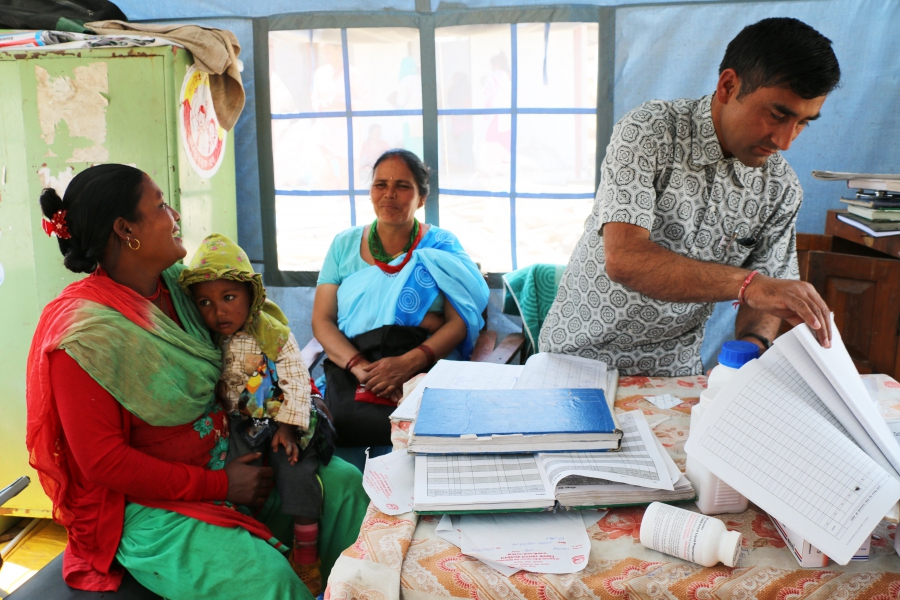 After the health center collapsed in the earthquake, medical services resumed inside this makeshift tent. But, the large crowds make it difficult for health workers to concentrate and spend enough time with each patient, says Dilip Yadav (right), who treats patients here.

“Everything was shaking, he says. “Bricks were falling down, and we were crawling, rushing out, falling over. I didn’t know whether I’d live or die."

A group of women health volunteers were also in the building that day for their monthly meeting.

"I could see the walls come down right in front of my eyes,” remembers Kamala Khadka, a petite woman dressed in the blue sari that health care workers wear in Nepal.

“The center was the only place around to get any health services,” she says. “All the medicines were buried under the rubble. I was sad that the sick wouldn't get medical attention any more. Kids used to get their polio vaccinations there.”

Government reconstruction efforts have been painfully slow, but aid groups have stepped in to help. After the earthquake, the affected regions were divvied up among a mix of international NGOs. This particular village is served by Save the Children, which proposed building a brand new, earthquake-resistant structure at a cost of $33,000. Nepal’s Ministry of Health approved the plans last year and workers are just now putting finishing touches on a new building.

A group of women health volunteers gather inside the new building for their monthly planning meeting, just like the one they were in when the earthquake hit. They sit in a circle, and some have their babies with them. 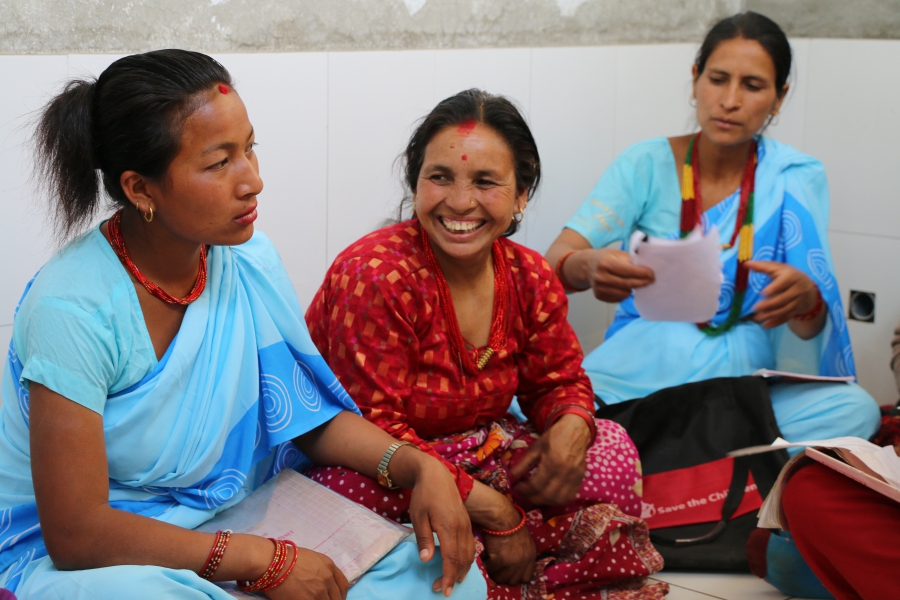 A group of women health workers meet inside the almost-finished health center to strategize medical services for patients. These women had a similar meeting at their old health center the day the earthquake toppled the building last year, but they made it out safely.

But it turns out there’s a silver lining to the earthquake for this remote village. Not only is the area getting a new clinic, it’s getting its first-ever birthing center. When that’s up and running, women won’t have to give birth in their homes or travel for hours to the nearest maternity ward, like in Khadka's case.

“When I went into labor, it was the rainy season and there was no way to get there by vehicle,” she says. “So 12 people took turns to carry me on a stretcher to the health post two hours away. It would have been a big relief if there had been a birthing center here. I'd have come running to this place!”

Another woman here, Nirmala Jirel, just had a baby a month ago. She says she couldn’t even get to a health center and delivered at home.

“Since the earthquake, lots of pregnant women are giving birth at home,” she says. “Only a few are going to health facilities.”

That can be dangerous in rural Nepal, where many villages lack midwives. Also, the temporary tin shacks people have been living in since the earthquake are not hygienic places to give birth.

“It is difficult to monitor the health of mother and child if they give birth at home, but in a medical center, we can constantly check on them,” Jirel says. 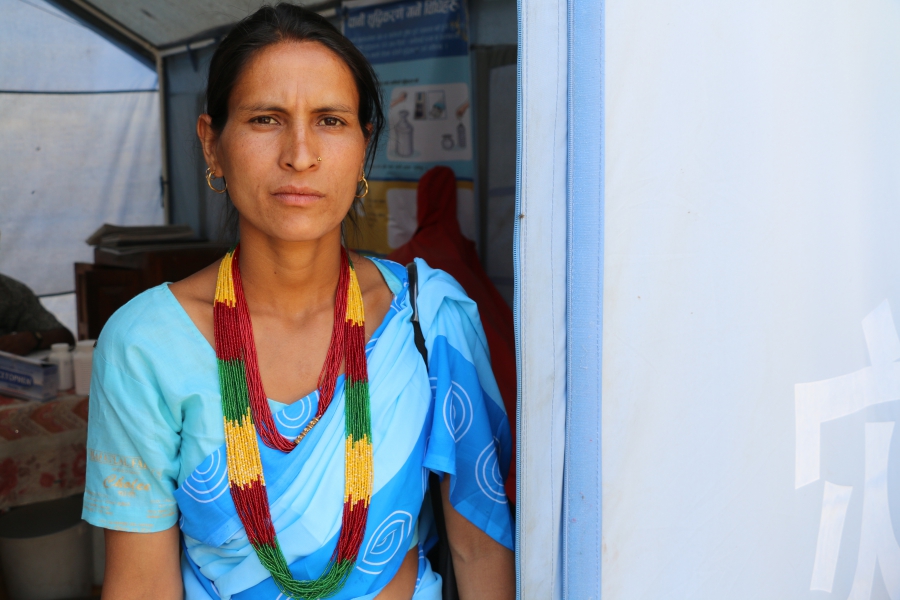 When Kamala Kadka went into labor, 12 people took turns carrying her on a stretcher to the nearest maternity ward two hours away. She’s excited the new health center will include a birthing center, so women don’t have to go through what she did.

Despite the excitement over the birthing center, the new clinic has some tough challenges ahead. For starters, there’s no water source up on this hill. For now, health workers are getting water from a nearby school. But they’ll have to figure out a reliable source in the months ahead.

After their meeting, the health workers gather outside by the medical tent. The mothers in the group hoist their babies onto their backs in traditional wicker baskets. They pull the long handles over their foreheads as they start heading down to the village. Next time they come up this hill, they hope to see patients being treated in the new building, not the crowded tent outside.