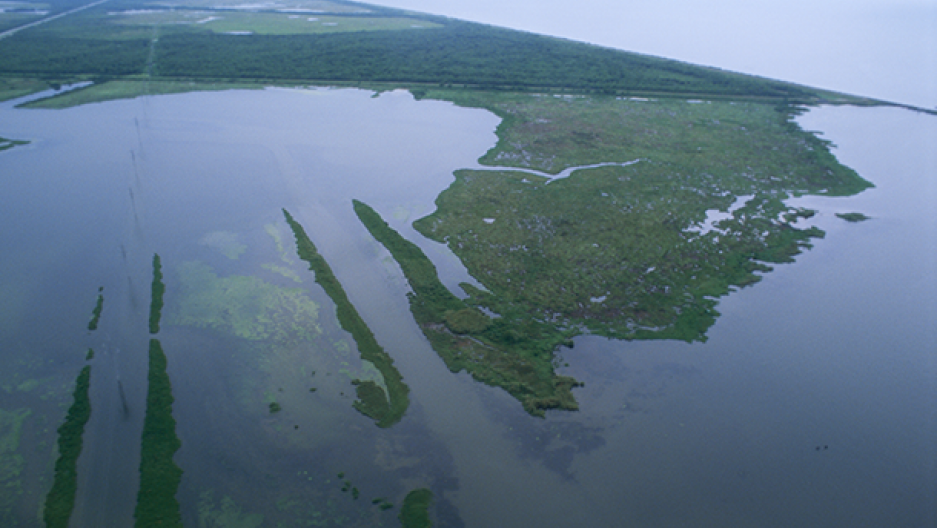 Coastal erosion and sea level rise erase between 25 and 35 square miles of Louisiana’s wetlands every year. A massive project to rebuild them may be starting to reverse some of the damage, but progress is slow.

A 50-year, $50 billion plan is underway to rebuild as much as 33,000 acres of wetlands in the Mississippi River Delta. But questions about funding the project remain unresolved and even if the plan is fully implemented, the delta will be far smaller than it used to be.

“Land loss continues,” Kemp says, “because a lot of what pushes land loss is actually the sinking of the delta and the rising of sea level, which is a global phenomenon. But we are now getting close to opening up diversions that are large enough to reverse loss over substantial areas. The footprint of the delta of the 21st century will be much smaller than it is today, but it will still be a very substantial delta.”

The Mississippi River built the Mississippi Delta. For thousands of years, the river spread out and delivered water across hundreds of miles of coast through channels called distributaries. A century of dredging and drilling, primarily by energy companies, blocked, slowed or redirected the flow of these distributaries, which has led to wetlands loss along much of the Gulf Coast.

Now, Kemp says, “it’s understood that if we’re going to have this delta survive, with the kind of sea level rise that we're seeing, we have to recreate those distributaries,” Kemp says.

The oldest operating river diversion, called Caernarvon, was built in 1991. It is the model for a new, artificial distributary system, says Kemp.

Caernarvon’s original purpose was to keep salt water from moving up into the wetlands, mostly for the benefit of oyster growers. But it has had a beneficial effect on the wetlands, also. “It's actually building a small delta, and in places it's enhancing the productivity of the marsh,” Kemp says.

Caernarvon is one of three artificial diversions currently operating. A second one, called Davis Pond, has been in operation since the early 2000s. The third is the West Bay Diversion, which seems to be working well so far, according to Kemp.

“We have seen a tremendous amount of development, both below sea level and now more of it above sea level, with vegetation beginning to take hold there,” he says. “What we learned was that you have to protect the areas receiving sediment from waves, and that when you do that, land building really takes off.”

Funding continues to be a problem, however. Much of the penalty portion of the BP Deepwater Horizon settlement was slated to go to wetlands restoration, but in the end many Gulf residents felt it wasn't enough. In addition, Kemp says, Gulf state legislators feel pressure, in this time of tight budgets, to try to move some of that funding toward other purposes.

“What we have found is that people in the state and [even] at the national level have understood that this is something that has to happen for there to continue to be a place for us to live,” Kemp says.

Mineral revenues, while controversial, have been another source of funding. A 2006 law, known as the Gulf of Mexico Energy Security Act, directed that 37.5 percent of the proceeds from lease sales and royalties that would normally go to the federal government should be distributed to the coastal states for land restoration. President Barack Obama’s 2016 budget calls for an end to this revenue sharing, however — a decision that has also stirred anger and controversy along the Gulf Coast.

Nevertheless, Kemp remains hopeful. “I teach students and they are hopeful — and I encourage them to be hopeful and to take an active role in restoration and to restore our coastal landscapes,” he says. “We have the advantage of having the Mississippi River, which is a huge land-building asset, if it is properly managed.”