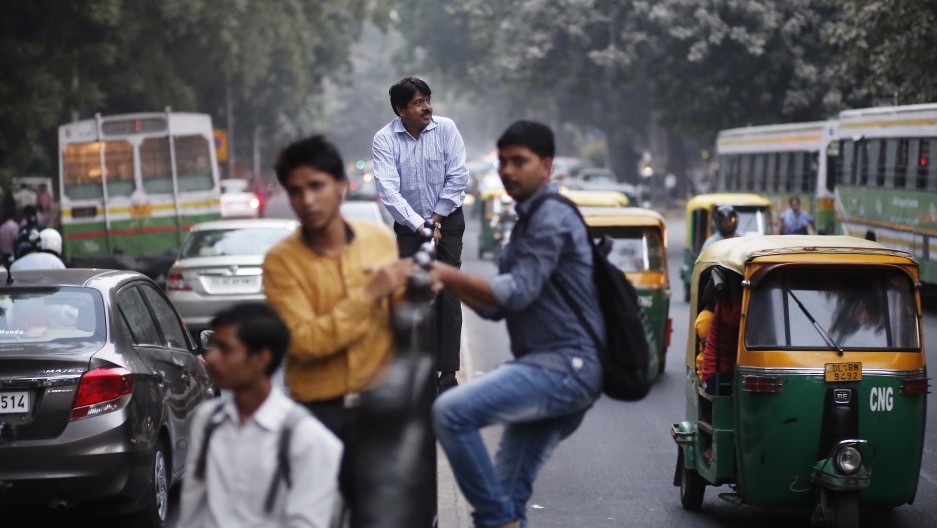 Pedestrians climb a fence on a road divider to cross a busy road in New Delhi on Oct. 28, 2014. India has some of the world's deadliest roads.
Credit:

A CCTV video released earlier this month shows how a busy intersection in New Delhi became a center of controversy.

In the 80-second clip, the usual buses, rickshaws, cars, and pedestrians zip to and fro. Then a man crossing the road spots something to his left and starts to run. But it’s too late — a speeding Mercedes hits him and sends him flying. The car does not stop, and all that marks the collision spot is the man’s backpack. He dies at the scene.

Siddharth Sharma’s family has sworn to do everything they can to get justice for their son, an IT engineer who was 32. Video of the incident, which is rare to have, is one of their strongest pieces of ammunition. But even though the driver who killed Sharma has turned himself in, the history of hit-and-runs in India shows it will be an uphill battle to convict him.

In a CCTV video, Siddharth Sharma is seen crossing the road moments before he was hit by a speeding Mercedes.

Screengrab of video from the Indian Express Online.

According to the most recent report by the Ministry of Road Transport and Highways, close to half a million road accidents occurred across India in 2014, in which 140,000 people died. Over 53,000 of the accidents in were hit-and-runs, which killed 19,569 people.

In 79 percent of all road accidents in 2014, the driver was found to be at fault. But that doesn’t mean they were punished for the crime. Conviction rates for urban road accidents in India have typically hovered between 5 and 10 percent. For hit-and-run cases, the lack of eyewitnesses and surveillance typically leads to a “blind” close of the case if the victim does not note the license plate number of the vehicle.

Plus, the 1988 road safety law currently in place stipulates minor penalties, making the effort to pursue legal action low on returns (it's also expensive). An updated draft law introduced in 2015 has yet to be passed, but even this version is watered down. For example, under new rules, killing a child due to rash or negligent driving would only warrant a year in prison and a fine of $750.

Actual hit-and-run numbers in India may be twice as high due to under-reporting, according to the Save Life Foundation, a road safety NGO. Many choose to forego reporting accidents because they don't expect the police to take action against rich and powerful drivers.

Shravan Kumar, a valet in New Delhi, was hit by a speeding car earlier this month. He lost consciousness and woke up in the hospital with severe bruises and stitches. The car that hit him had not stopped.

The police approached him to ask if he wanted to file a complaint, but he decided against it.

“I have a busy job, I had to foot the medical bills, I don’t have the resources to pursue a case,” he said. “Nothing will happen anyway, and even if they track down the man, he will just pay off the cops.” City police could not be reached for comment.

Impunity for the wealthy has characterized a few widely covered cases here. The high profile case of Bollywood actor Salman Khan is one example. Fourteen years ago, Khan ran over five homeless people sleeping on the pavement and killed one of them. He fled the scene. Despite being convicted by a trial court in 2015, he was acquitted by the state high court. The high court found that proof Khan was even driving the car was “insufficient,” as his driver came forward years after the incident claiming that in fact he was behind the wheel. Khan’s acquittal is currently being appealed in the Supreme Court. 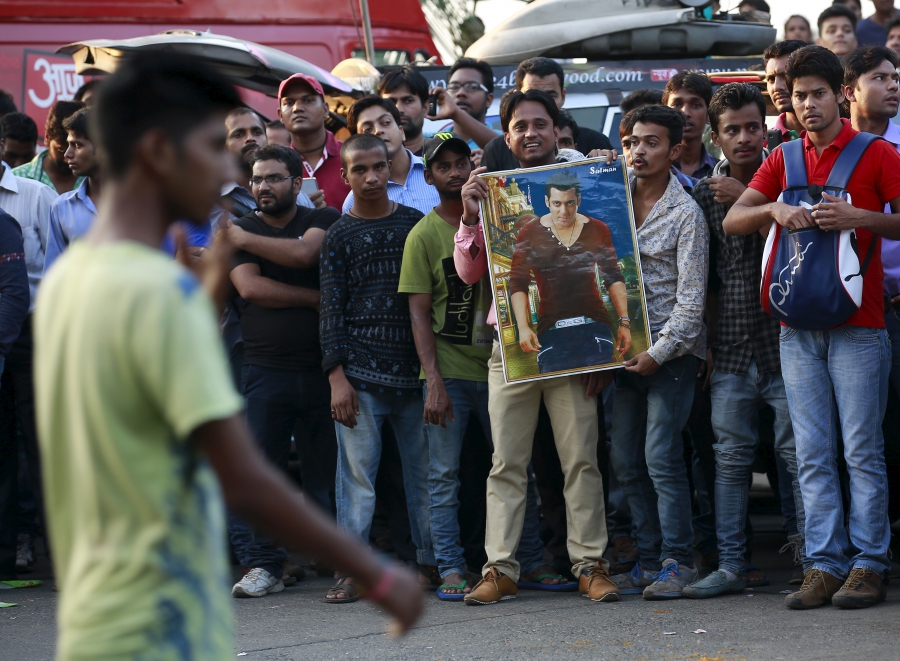 Fans of Bollywood actor Salman Khan hold his portrait as they celebrate outside his house in Mumbai, India, Dec. 10, 2015 — the day an Indian court overturned Khan's conviction in a 13-year-old hit-and-run case, scrapping a lower court's sentence of five years in jail for running over a homeless man.
Credit:

The fact that the perpetrators of hit-and-runs in India are often driving expensive cars is no coincidence. Already since Sharma’s death, there has been another incident of a BMW injuring four people and the driver leaving the scene. The rich are inevitably the powerful, and even if attention is successfully drawn to their crimes, they can often buy their way out of punishment. In the 1999 case of Suresh Nanda, the son of an important Indian industrialist, a sting operation found Nanda’s lawyers attempting to bribe witnesses. Nanda ran over and killed six, including two policemen. He was acquitted before being re-tried and found guilty in 2008. He got away with time served and community service.

In Sharma’s case, the chauffeur for the driver’s family had been sent to the police to claim that he was the one behind the wheel, but he retracted his testimony when he found out that the victim had died. He has since been booked for tampering with evidence. Meanwhile, the 17-year-old who turned himself in for the crime was not detained or tested for intoxication because he was a juvenile (he turned 18 five days after the accident). The victim’s family claims that despite eyewitnesses confirming it, the police initially questioned if the accident was the boy’s fault at all.

The same teen had hit another car in February, but the driver decided against pressing charges because it was clear that the boy had many powerful contacts.

“I knew he would not be punished so I decided not to lodge a case against him,” the earlier victim told an Indian newspaper.

What’s rare in Sharma’s case is the CCTV footage his family found and shared. It is widely seen as the evidence the case needs to succeed, and has galvanized a #JusticeforSidd social media campaign. Further investigation as a result of the footage revealed that the boy is a repeat offender who has been charged with rash driving three times already. India’s juvenile justice laws restrict the sentence the boy can receive, but he has been charged with culpable homicide and his father has been booked for abetment for repeatedly letting his underage son drive the car despite past incidents.

Still, the Sharmas may need to rally all their resources to ensure that a conviction goes through.