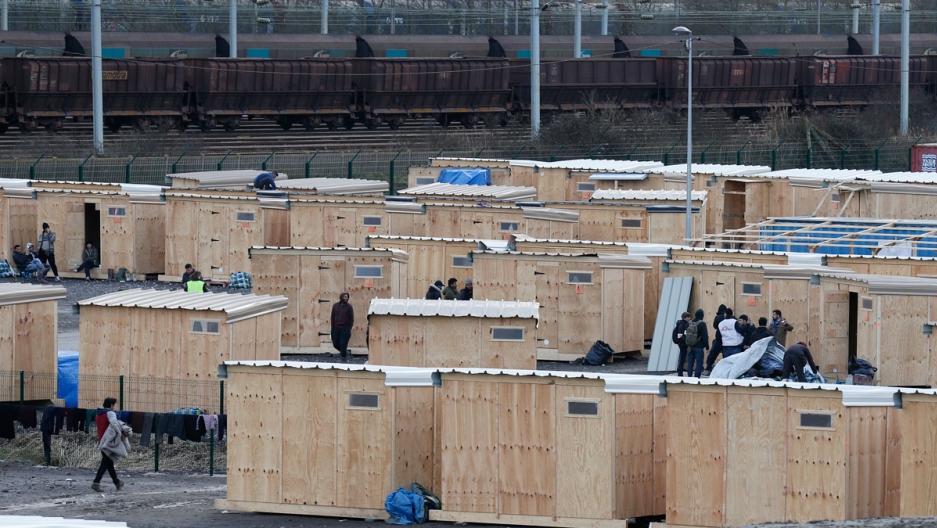 Rows of shelters in a new refugee camp in Grande-Synthe in northern France, March 8, 2016.

Last January, the mayor of a northern French town took a bold step and announced he was going to open a new camp for the 2,500 migrants who had taken refuge in a wooded area in town. At its most crowded, the improvised camp in Grande-Synthe had 2,500 people, most of them Kurds, living in filthy conditions — mud, trash — and sleeping in small tents.

So last month, at the cost of 3 million euros, mostly covered by Médecins Sans Frontières (Doctors Without Borders), a new camp opened at Grande-Synthe — despite the French government’s objections — on a larger, drier site.

The camp is set up around a long stretch of gravel road where kids can ride bikes. And Raphaël Etcheberry, spokesman for Médecins Sans Frontières, says the improvements here go well beyond the dry, solid ground. There is a full-size medical clinic, a grocery store, a laundry facility, a kitchen and a soccer field. And there's a non-profit in charge to manage the camp and coordinate volunteers.

"Today we feel like we are on a much more viable structure,” Etcheberry says. “We see smiles, people get busy, kids ride bicycles, play soccer, same with the adults. It seems people are living again here, whereas on the old camp they were subjected to weather conditions and everything else.”

Gone are the flimsy camping tents. What you see now are small wooden shelters, organized in neighborhoods each with dozens of showers and toilets for the residents. The shelters have heat and are numbered so people can find each other.

Comfort is perhaps especially important for the youngest refugees. Las Karani is an 11-month-old boy with blonde curls and blue eyes. He and his parents, Eskander and Frishta, are Kurds from Sulaymanyah in Iraq. Eskander Karani says life has definitely improved for the family.

“We have room,” he says, “before, we have tent, we can’t stand, but now we can do everything here.”

His neighbor, Gona Aziz, also lived at the old camp. She, too, is an Iraqi Kurd. She’s on her own in Grande-Synthe with four young children. She seems in much better spirits than three months ago when she was living in a tent.

Aziz says she likes the new camp and the fact that the kids can play and ride their bikes nearby. But it’s still cramped quarters and there’s often no hot water.

Children play on the main road at the new migrant camp in Grand-Synthe, France.

Still, to say the relative comfort of this camp is giving hope to the people who live in it would be a stretch.

Farther down the main alley lives Yussef Hamudi, a Kurd from Syria. He’s been stuck in France for three years. But he’s more worried about the families living next door than himself. One woman there is heavily pregnant. They have no formula, and their shelter has a leak.

“Please, please European Union, take out from this place this family,” he pleas. “No problem leave a single man. I’m single — whatever, if I sleep here, if today I don’t eat, no problem. But small kids and woman pregnant, you see by your eyes, you see the pregnant time coming. We need just move this family [out of] here.”

Hamudi says this camp is safer, but also much noisier, as it is wedged between a highway and a railway.

“There’s train, every time, ‘tung, tung, tung,'" he says. "There’s a motorway always, cars they pass, trailers they pass, kids they scared and they cry, everything.”

Across the alley from Hamudi’s quarters, there’s a large poster of Justin Bieber on a shelter’s wall. In the old camp it was pinned onto a tent. The image of a wealthy North American pop star in the midst of so much misery is a surreal sight.

Fares al-Dhufairy is a Bedouin from Kuwait. He's been on the move for six years and hopes to make it to the UK where the rest of his family lives.

It belongs to Fares al Dhufairy from Kuwait. Al Dhufairy is a Bedouin, which makes his case a bit more complicated than other migrants’ because he is stateless. His brother, who recently illegally crossed into the UK, found the poster and held onto it like a lucky charm.

Al Dhufairy is hoping to reunite with his family in England. He’s been on the road for quite some time, and he’s frustrated.

“Now I see I am 21 with nothing,” he says. “I would like have a life, have a job, just finish my [studies] and be like translator man or engineer, but in this time, I feel like I’m in jail, not in the life.”

For al Dhufairy, the camp’s new clean showers are nice, but they can’t solve his problems.

“I don’t feel I am human today, today is nothing,” he says. “Actually we’re living like chickens in farm. At night we get to sleeping, in the morning, we get our food.”

His state of mind is not surprising to Florence Vanderborght. She’s a site coordinator for the NGO Doctors of the World.

She says now that people don’t have to worry about freezing or starving, more essential problems are coming to the fore.

“Obviously there is a big improvement about the first needs in the camp, like water, food, security,” she says, “but the real problems are still there. People fled their country and need to find somewhere where they can rebuild. For most that will be England, so the basic problem is that they’re still stuck at the border. Now that they’re in a context where they can think about those difficult things they lived, we can identify people who actually need help, suffer from PTSD and depression.”

Fares al Dhufairy does feel stuck here. All his family’s cash was used to get relatives to England and he’s the only one left, without a cent.

He became known in the camp as the guy with the Bieber poster. So it’s now part of his identity. For al Dhufairy, this poster has become a symbol of those who have everything.

So now, looking at Bieber on the poster, he says: “We’re the same age, but he has everything. I would not like be a rich man like him, but I would like simple life, not more: passport, ID card.”