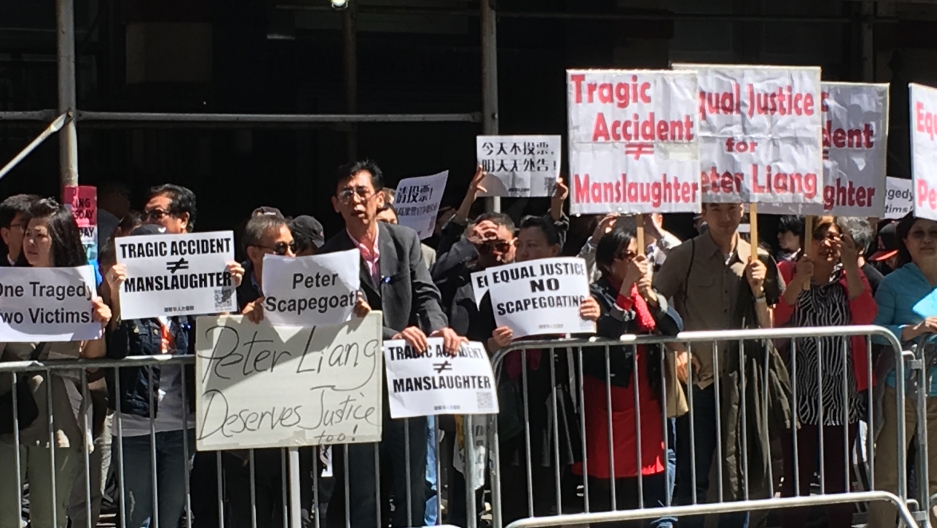 Protesters support former New York Police Officer Peter Liang outside a Brooklyn courthouse before his sentencing for manslaughter in the killing of Akai Gurley, in New York on April 19, 2016. He received probation for the crime. Some Asian Americans have used this case as a springboard to open up dialogue about civil rights across ethnicities.

At a Brooklyn Courthouse this week, a somber crowd of protesters took in the news that former NYPD officer Peter Liang was sentenced to five months of probation for the 2014 killing of Akai Gurley. It was a far cry from the maximum possible sentence of 15 years in prison.

The protesters were a multi-racial crowd, though predominately black. It included several generations, from teens to the elderly. About 20 college-aged Asian Americans stood in the crowd. Katie Lam, a sophomore at Barnard College, stood with a group of her friends; one held a sign with Chinese characters that translated to “Black Lives Matter.” 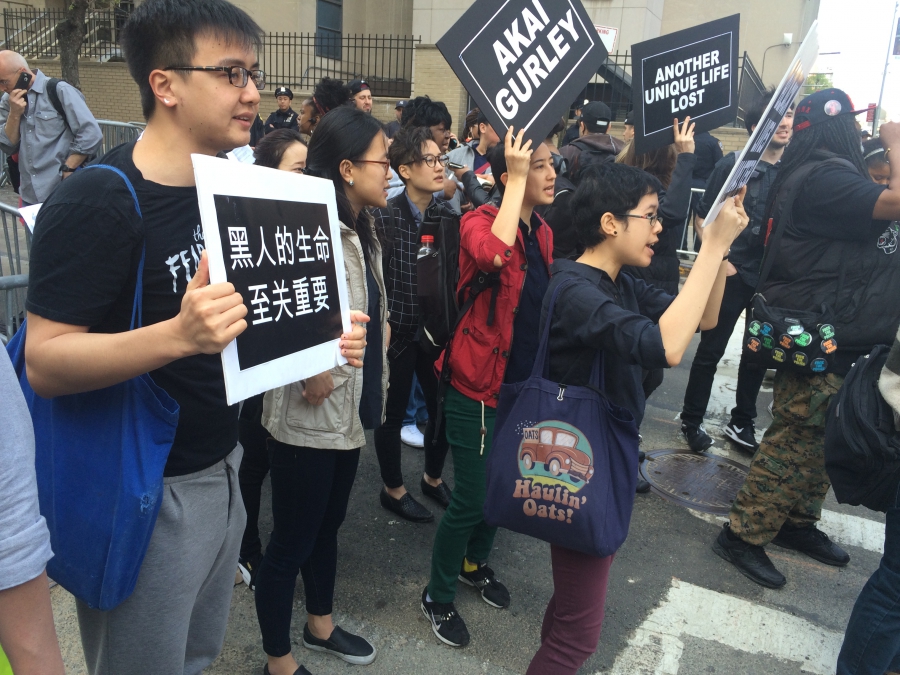 About 20 Asian Americans protest at the courthouse before the sentencing of former NYPD officer Peter Liang for the 2014 killing of Akai Gurley. The sign in Chinese reads, literally, "Black people's lives are also important," a way of saying "Black lives matter."

“I’ve been involved with Asian American activism for a while. I knew it would be really important that young Asian Americans show up to these kinds of actions to show that we support the Black Lives Matter movement,” said Lam. “We understand the implications of trying to assert that Peter Liang deserves some kind of reduced sentence just because he doesn’t carry white privilege.”

Across the street, about 100 protesters were gathered to advocate for Liang’s release. This crowd was almost entirely Asian American, and predominantly middle-aged to elderly. Just one college-aged student stood out.

The Liang case has been divisive among the wave of high-profile police shootings over the past two years, and has brought Asian Americans into tough debates. Liang, who grew up in New York’s Chinatown and is the son of Chinese immigrants, is the first NYPD officer in a decade to be criminally charged for shooting an unarmed citizen. His supporters say this would not be the case if he were white; other Asian Americans have taken the case as an impetus to more actively support the movement against police brutality.

One place where Asian Americans seem to be united on this issue, for the most part, is college campuses. Jenn Fang, founder of the feminist Asian American blog Reappropriate, has written about why she supported Liang’s indictment. She often leads workshops with college students at Yale and other East Coast universities on issues of Asian American identity. The Liang trial is a topic that keeps coming up. Her students, though, aren’t struggling to decide which side to support. They’re trying to figure out how to convince their parents that they should stand with Gurley.

Also: Despite history, Japanese Americans and African Americans are working together to claim their rights

The generational divide is, of course, not absolute. Columbia University’s Asian American Alliance, a student group, received pushback for a fiery op-ed published in the Columbia Spectator, “Asian America, we cannot support Peter Liang.” A member of the group, who wished to not be named, said they received angry emails from other Asian American students.

Fang says conversations about Asian Americans’ place in civil rights movements is complicated not only by political disagreements — commonplace for many American dinnertime discussions — but also by differences between those born in the US and those who have immigrated.

“Anti-blackness’ is not a phrase that exists in my home language, which is Mandarin,” says Lam, the Barnard student. “There is this very real generational gap and linguistic gap.”

Vivian Truong, a doctoal student in Asian American Studies at the University of Michigan was aware of all these barriers when she broached the topic with her parents, who are immigrants from Vietnam. But she was surprised by how productive the conversation was.

“I realized that they had a more nuanced view than I originally thought. They realize that Peter Liang had done something wrong, but were angry about the fact that he was the first to be convicted in a decade,” she says. “It made me realize the necessity to have this kind of conversation between first generation immigrants and second generation who have more access to social justice.”

Truong asked her mother if she would attend a Black Lives Matter event with her in New York, where she lives, in the future: “She said maybe.”

The Liang case gave Truong a reason to transition from a Black Lives Matter ally to becoming an organizer. She has begun to collaborate with local Black Lives Matter leaders and staged an event of her own: On April 15, she and eight other Asian American students intervened in a panel discussion on the case that skewed pro-Liang. They taped a banner to the wall that read “API 4 black lives.” (API is short for Asians and Pacific Islanders.)

Also: However you feel about Chris Rock's Asian joke, it takes guts to talk openly about race

Back at Columbia, Asian, Black and Latino-led student groups organized an event to open a dialogue on race and solidarity in relation to the Liang case. “It was important for us to have an open conversation,” says Janice Delia Desmangles, a member of the Black and Latino Student Caucus, which helped facilitate the event. “We felt a rare moment where we saw Asian Americans advocating and protesting for a cause. It was a really good time for us to align.”

Desmangles was surprised — and impressed — by the degree to which some of her Asian counterparts believed justice needed to be served in the Gurley case. “I thought that there would be a strong group of people who thought 15 years was too much,” she says. “But there were a lot of people who thought he deserved more.”

The Liang case is over now, but the dialogue, Desmangles hopes, will continue.

An earlier version of this story mistakenly said that Vivian Truong's mother lives in Ann Arbor. She lives in New York. We regret the error.