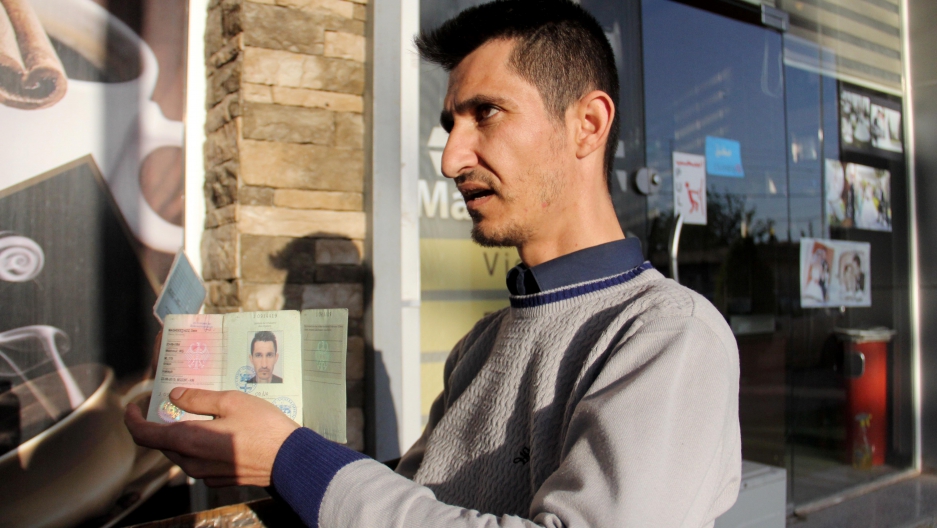 Dana Maghdeed Aziz holds up the identification issued to him by the Germany government.

In September 2014, Dana Maghdeed Aziz decided he could no longer stay in Iraq. ISIS seized control of his town, Mahkmour, and the future looked bleak. He sold his taxi and some of his wife’s jewelry and borrowed money from his family. Then he flew to Turkey.

“In Turkey, I bought a fake passport and tried to get into Bulgaria but they caught me and put me in jail,” Aziz says. “I told them I’m not criminal. I’m just a regular refugee looking for asylum.”

Aziz was taken to a camp in Bulgaria and told he had to claim asylum there. But he didn’t want to stay in the country, so he slipped away.

“I tried everything to reach Germany,” he says over coffee.

In March 2015 he finally made it. His plan was to get asylum in Germany and establish a new life for his wife and two children, who were waiting in Erbil to join him.

But almost a year later, he still didn’t know if Germany would grant him asylum or if his family would ever be allowed to join him. Germany is overwhelmed. Just last year, it received 500,000 new asylum applications. 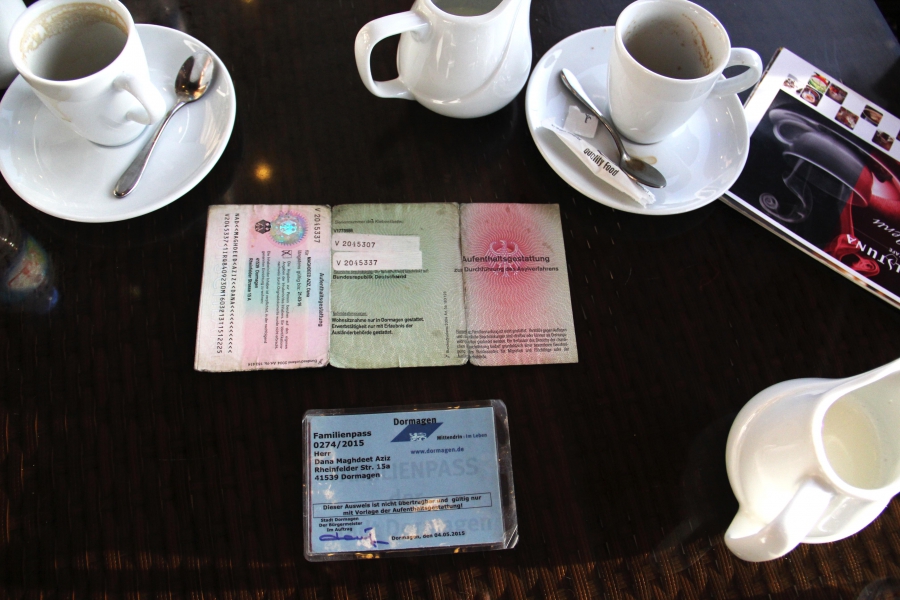 Dana Maghdeed Aziz’s German identification cards on the table in a café in Erbil. After months in Germany he still didn’t know if he would be granted asylum.

“I had my first asylum interview in July of 2015. They said it would take three months. But in December I still didn’t know,” Aziz says. "Then in January, my children got sick.”

On top of all that, Aziz wasn’t allowed to work while he waited. He was living in government-provided housing with a monthly stipend of 325 euros from the German government (about $365). 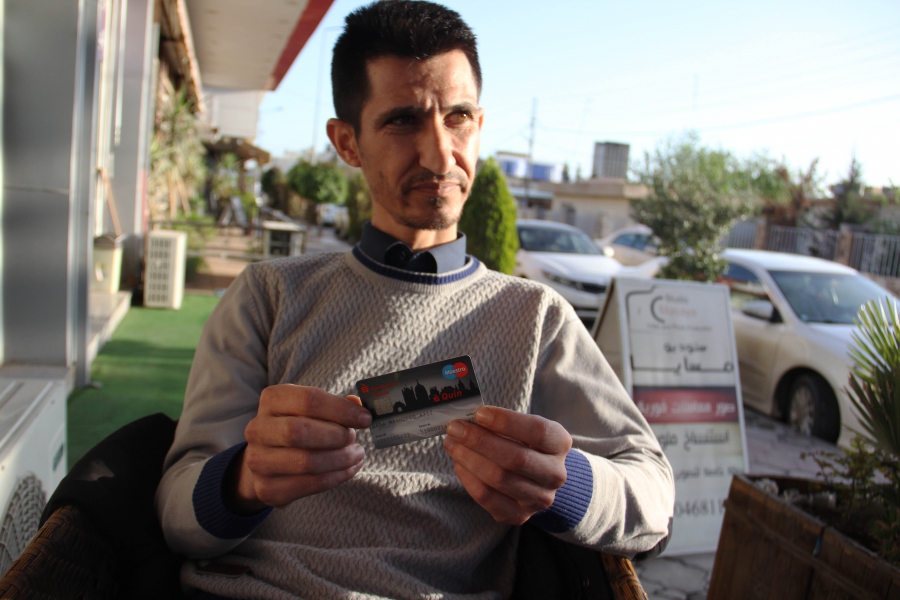 Dana Maghdeed Aziz holds up the cards through which he received a stipend from the Germany government.

Like many of the Iraqis who went to Europe, Aziz was the breadwinner for his family. But now he couldn’t send any money home.

“My wife had to sell the rest of her gold jewelry to support the family,” he says.

In February, Aziz gave up. He went to the Iraqi consulate in Frankfurt to get a one-way travel document and came home.

He's one of about 5,000 Iraqis who’ve returned since October with help from the International Organization for Migration. Many more Iraqis have returned on their own, unwilling to wait for assistance.

A security guard at Erbil international Airport says every flight from Germany is carrying some returnees. On one recent trip, there were at least eight Iraqis coming home after making the dangerous and expensive trip to Germany. Among them was Samad, who didn’t want to use his last name. In December, he says, he sold his land and paid a smuggler to get to Germany.

“I just followed the other people. They were saying there’s a better life in Europe,” Samad says. “I wanted to see for myself.”

But the reality was disappointing.

“I was expecting a comfortable life and that they would provide us with help,” he says. “But it was so difficult.”

Like Aziz, he didn’t know if he would be granted asylum or if his wife and three children would be able join him in Germany. And he was trying to support the family from afar.

“We were always in the camp. I shared a room with eight people and I wasn’t allowed to work,” says Samad. “If there was a hope I would get asylum soon, I would have stayed. But there was no hope.”

While Syrians have a good chance of getting asylum in Germany, for Iraqis it's less certain. Samad was so anxious to return, he didn’t wait for help. He spent the last of his money to buy his own ticket back to Erbil.

“I sold everything to go there,” he says.

Back at the café in Erbil, Aziz explains that if his family had been with him in Germany, he never would have come back to Iraq.

His town has been retaken by Kurdish forces now, but it’s still on the front line. And he doesn’t think it’s safe to go back. For now he’s sharing a house with his parents in the city, looking for work.

Aziz and Samad are both starting again from scratch — no taxi, no job, no money. Aziz spent almost a year in Europe and in the end has nothing to show for it.

“Of course I regret it,” says Aziz. “I spent all my money on a goal I didn’t achieve. Now, I’m in my own country and I can’t even buy a cup of coffee.”