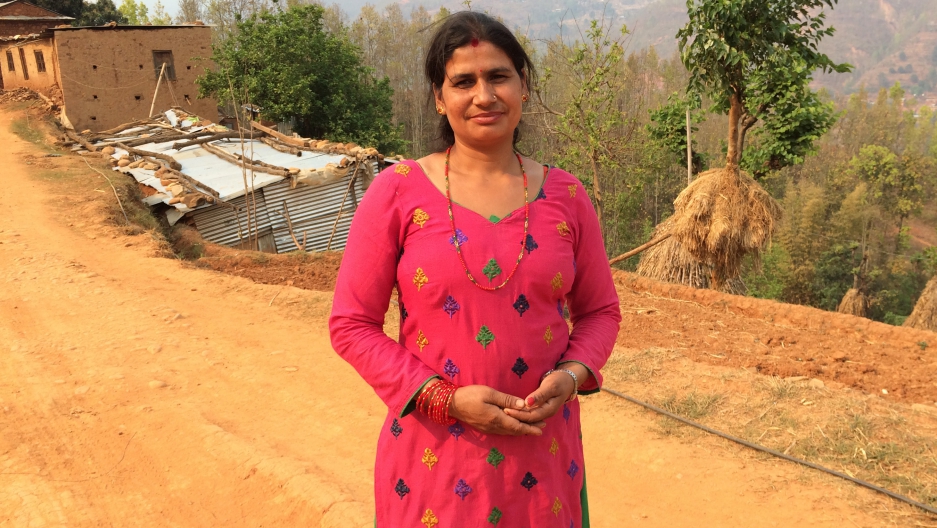 Bimala Parajuli is a volunteer community health worker in a remote mountain village in Kavre district, Nepal. Here she stands on the dirt road that she walks everyday to visit pregnant women and children in her community.

Editor's Note: Reporter Sonia Narang went back to follow-up on a health volunteer she profiled a few years ago for PRI's The World.

Bimala Parajuli recalls the moment the earth started shaking beneath her. Walls crumbled all around her, and she felt a pain in her ankle as bricks and stone came crashing down.

As a long-time health worker in her small Nepali village, her thoughts quickly turned to the well-being of her neighbors.

“I didn’t know who was alive and who wasn’t. I thought maybe we were the only ones who survived,” Bimala says. “Immediately, my concern was, what had happened to everyone else?”

When disaster struck in April 2015, Bimala was on the front lines, running from home to home trying to rescue children and adults in the village. Despite her injured ankle, she kept going, helping those in need.

I wasn’t surprised by her resolve and tendency to put others first. Three years ago, I had filmed and interviewed Bimala about her work helping pregnant women in her rural village.

We had spent the hot summer day walking together along a steep mountain path, as Bimala checked in on an eight-month pregnant woman in a remote area.

Bimala lives in Kavre district, one of the hardest-hit areas in the deadly 7.8-magnitude earthquake. It’s where she’s done life-saving work for years, preventing newborns from getting potentially fatal infections.

Bimala pulled her own 4-year-old niece from the rubble, but the child didn’t make it out alive. In the days that followed, she helped distribute medicine and checked up on the mothers and babies she’d been keeping tabs on before the quake.

I went back to visit Bimala a year after the earthquake.

Bimala Parajuli holds up the bright blue sari that she pulled from the rubble of her destroyed house. She wears this uniform when making house calls to check on women and children in her village.

The day I arrive, she’s waiting for me by the side of the dirt road, and she greets me with a big smile. She’s dressed in a beautiful, bright pink outfit, giving me little indication her life has turned upside down since we last met.

I follow Bimala uphill as I climb the reddish dirt path I remember from my previous visit. As we reach the top, I’m shocked to see her house in ruins.

The entire second floor toppled in the earthquake, and the remnants of the first floor are uninhabitable. It’s the first time I’ve ever seen someone’s home destroyed just a few years after meeting them.

I can only recognize one thing: the wooden ladder I had climbed three years ago to Bimala’s second floor as I filmed her getting ready in her bright blue sari — the uniform for women health volunteers in Nepal. Now, the sari sits in the creaky, wooden cabinet she recovered from the ruins of her home.

She pulls out the sari and holds it up as a proud reminder of the work she’s done over the years. Even now, she remains a well-respected health worker in her community.

Across Nepal, thousands of female health volunteers provide counseling and medicine in their local communities. In the aftermath of the earthquake, these blue-sari-clad volunteers toiled to combat disease and malnutrition in hard-hit villages, many too far from health clinics or hospitals.

Bimala suffered major losses in the earthquake, and now, an entire year later, she’s living in a cramped shelter of tin and wood that she set up next to her animal shed.

When I ask her about plans to rebuild her home, Bimala suddenly gets quiet and chokes up. Though she’s managed to stay strong, she has little hope left.

As she begins to cry, I can sense her extreme frustration. She still has a loan to pay off for her old house, and Nepal’s government has only offered families a total of $2,000 to build new homes. This amount will be distributed in three small installments over time. And the homes have to meet specific design criteria determined by the government.

“What house are we going to build with that money?” Bimala asks. “Even when I built my previous home years ago, it cost more than that.”

So far, Nepal’s government has been slow in disbursing funds to families who lost their homes.

“That is a five-year plan, and only God knows when will we get it,” she says. “The government took years and years to build a very essential bridge in this village, so I have no hope about the money or the house.”

Bimala no longer has a kitchen, so she cooks inside her animal den, full of goats and one cow.

She leads me inside this dark shed, which smells like grass and manure. In the corner, there’s an open fire pit on the ground. There’s a shelf with some pots and pans, and behind her, a big pile of corn is stacked up on a tarp. While I’m looking around, her large cow urinates right there in the shed.

“See, I have to cook food in such a place,” she says. “But I still go around and tell people to be hygienic and maintain a clean living area. I don’t want them to suffer from diseases.”

She can’t believe the irony of her situation. “Our kitchen used to be clean before. Look what has happened now,” she says. “Now, we practically live with the animals here.”

Another new challenge is access to water. The earthquake damaged the area’s water pipes and tanks. Now, there’s no water available from the local tap, and Bimala and her daughter have to walk a half hour from home to fetch water, which is only available for an hour a day. 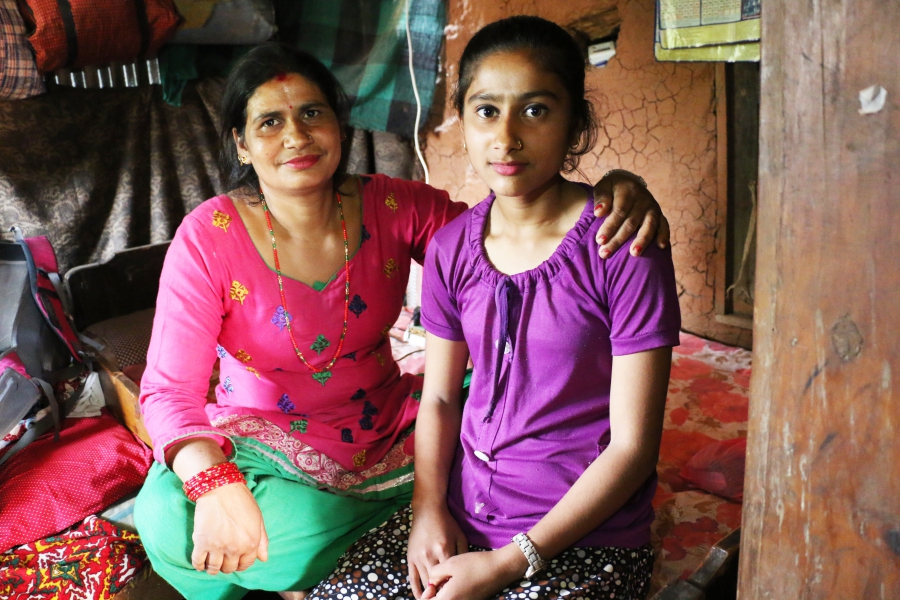 Volunteer health worker Bimala Parajuli (left) and her 14-year-old daughter Sonica (right) lost their home in the Nepal earthquake one year ago. Now, they live in a cramped one-room makeshift shelter next to their animal shed. Bimala has no hope of rebuilding a new house, given that costs exceed the amount the government has offered to provide earthquake victims.
Credit:

As a volunteer health worker, Bimala doesn’t get paid for her community health duties. Her only source of income is her cow, which provides some extra milk to sell. Bimala worries about her 14-year-old daughter’s school fees. Her daughter just finished 10th grade and hopes to pursue a three-year degree in nursing.

“I have to educate my daughter. And if I start having to pay off these house loans, how can I educate my child?” she says with a deep sigh.

Still, Bimala says she’ll never stop working for her community, even though she’s trying to put her life back together. She happily talks about all the healthy babies born in her village after the earthquake.

“All of the mothers gave birth in hospitals,” she says. That success is in part thanks to Bimala. She spent years educating women of the importance of safe childbirth practices in her village.

“I feel very happy to see these healthy babies,” Bimala says. “I saw their mothers when they were pregnant. I taught their mothers what to do, what to eat. None of the infants have had pneumonia so far.”

She knows her role is an important one, and she tries not to let her own despair get in the way.

“I don’t want mothers and babies to die because they don’t have access to medicine,” she says.

Three years ago, I filmed Bimala deliver a tube of chlorhexidine, a cheap ointment that can prevent infections of the belly button, to an eight-month pregnant woman in the village. Now, Bimala tells me proudly, the woman has a healthy child, and she checks in on them regularly.

“Since I’ve helped people for years, they seek me out and have confidence in me,” she says. “They want me to attend ward meetings. I might not receive help from anyone, but I will continue to help people in need.”

(Watch Sonia's profile of Bimala Parajuli from 2014 below.)