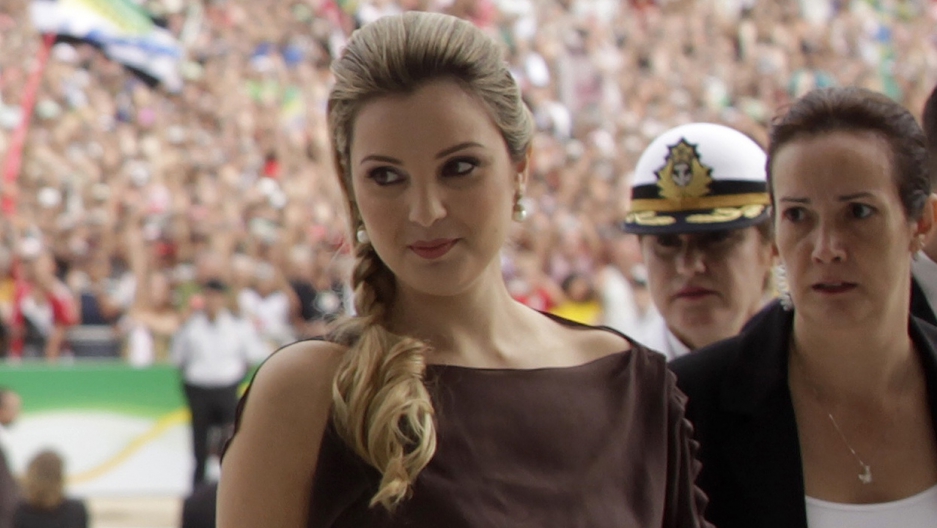 A story in a Brazilian magazine this week is triggering serious ridicule, and a pretty great internet meme, because of the following message: The country’s next first lady will be a "beautiful, demure housewife."

Published Monday, the story's timing couldn’t have been more infuriating to many women. That same day Brazil’s first female president, Dilma Rousseff, told a news conference that the male-dominated Congress' efforts to impeach her — plus their shouts of "Goodbye, dear" — were loaded with "prejudice against women."

It was the headline of Veja magazine's story, a profile of 32-year-old Marcela Temer, who is married to 75-year-old Vice President Michel Temer, that got Brazilians riled up. It reads: "Marcela Temer: Bela, recatada e 'do lar,' " which translates to: “Marcela Temer: Beautiful, demure housewife.”

Sonia Correa, who coordinates the local website Sexuality Policy Watch, says the article clearly reflects an image of women favored by the more conservative elements of Brazilian society — including many of the lawmakers pushing to oust Rousseff.

“This is to contrast Dilma [Rousseff],” she says. “This is how Veja aligns with many of the guys that have taken over power at this tragic moment. Part of them are very happy with the idea of returning women to their natural places, so to speak.”

Vice President Temer would become president if, as many predict, Rousseff has to step down for an impeachment trial.

The fawning article describes his wife Marcela as “almost first lady.” It says the former beauty pageant contestant is lucky since her husband still finds time to take her out for romantic meals.

​By Wednesday, Twitter, Facebook and other social media sites had exploded with mockery. Social media memes emblazoned with the story’s headline depicted women in poses that confront the archetypal feminine image portrayed in the article.

Before long, a Tumblr account — belarecatadadalor.tumblr.com — was curating the memes.

("Nobody’s against homemakers or demure women. Just as long as you respect how we are.")

Misogyny is nothing new in Brazil or its politics.

In 2014, conservative congressman and darling of Brazil’s rich Jair Bolsonaro told a fellow lawmaker he wouldn’t rape her because she “didn’t deserve it.”

Bolsonaro was ultimately fined $2,500 for his remarks.