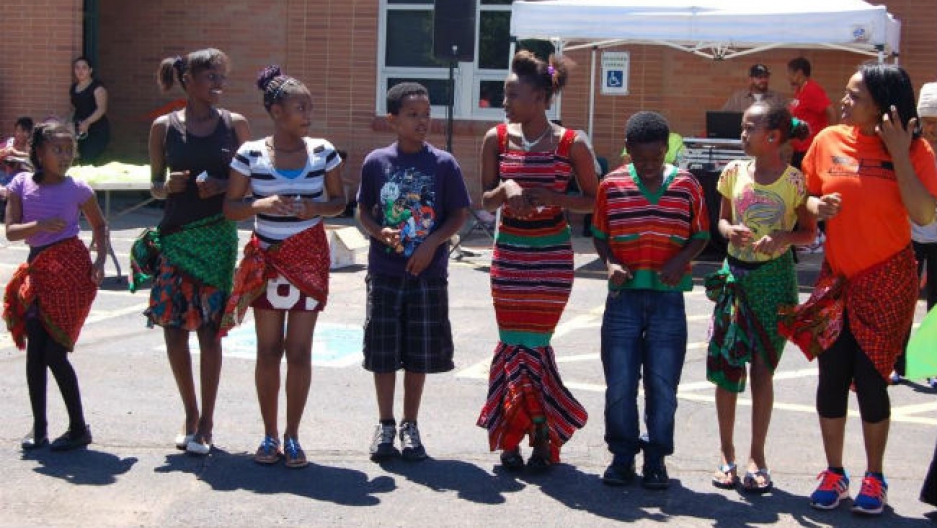 On a sunny Saturday in January, a dimly lit conference room was abuzz. Extra chairs were brought in to accommodate the families of more than 100 students, all of whom had moved to the United States since the start of the school year.

As Aurora school district officials ticked off a list of things to know — it’s against the law to miss too many days of school; a high school diploma can help open professional doors; yes, school is still (usually) open when it snows — each point was echoed in Spanish, Nepali, Swahili, Amharic, Karen, Karenni, Rohingya, French, Dari, Hindi, Hebrew, Vietnamese, Tigrinya, Somali, Burmese, Arabic, and Kinyarwanda. Some families listened in on headphones; others listened intently to interpreters whispering directly to them.

This was the second official newcomer weekend put on by the Aurora Welcome Center, an organization specifically designed to meet the needs of students and families who have recently arrived in this suburb of Denver.

Aurora, Colorado is one of many American towns and cities that have been transformed by new patterns of immigration over the past decade. Foreign-born students now make up 6 percent of the total US public school population, according to the US Department of Education. And as populations change, schools and teachers must learn to shift programs and curriculums to reflect their evolving communities.

“Schools are really a site for integration,” says Annie Duguay, the associate director of PreK-12 EL Professional Development at the Center for Applied Linguistics. “And it’s really a two-way site, where educators and families are both learning about other cultures.”

Newcomer students are often still learning English and usually have a variety of other needs as well. Some have limited or interrupted schooling; others are refugees who may be dealing with trauma; others have been separated from their parents and are undergoing the strains of reunification.

The need for such programs has increased and spread geographically. A 2014 report by the Pew Charitable Trusts found that more immigrants and refugees are moving outside major metropolitan areas in recent years. In 1990, 75 percent of new immigrants lived in one of six states, but by 2010, just 65 percent lived in those gateway destinations, while states such as North Carolina, Nevada, and Colorado welcomed growing immigrant communities. 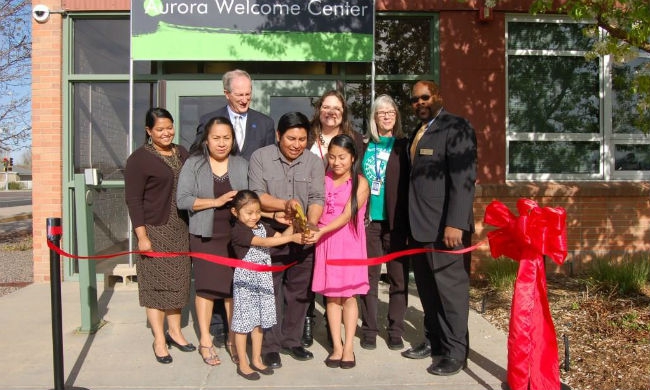 The opening of the Aurora Welcome Center.

It’s difficult to determine exactly how many newcomer programs are being run in the United States. According to Deborah Short, a senior research associate at the Center for Applied Linguistics, the number of programs dropped between the late 1990s and 2012, from around 115 programs to about 65.

This was partly due to No Child Left Behind, the federal education law that set strict performance targets for schools and harsh consequences, including closure, for those who failed to meet them. Since newcomer programs often serve students who, due to language barriers or interrupted schooling, don’t fare well on standardized tests, many districts opted to shut down schools and integrate newcomers into traditional programs for English language learners.

But after several years, Short says, the tide has turned and newcomer programs are springing up again in cities across America, though no one has conducted a study of just how many programs exist since 2012.

Short says the increase can be credited to districts finding ways to avoid having programs penalized under No Child Left Behind and various changes to federal education policy that gave schools more flexibility. The new federal education law passed earlier this year, the Every Student Succeeds Act, gives states even more flexibility in determining how to evaluate schools. Some say the new law may even encourage the development of more newcomer programs, but at this point it’s too early to tell.

Back in the 1990s, newcomer programs were primarily focused on teaching students English. Today, these programs make it a priority to help ease students’ and families’ transitions in a more holistic way.

“You have to do more than just instruct,” Short says.

In Loudoun County, Virginia, for instance, the school district has seen an influx of students from Central and South America. Most of that growth has been in high-school-aged students arriving to the United States alone and for the first time, often referred to as unaccompanied minors.

That led Teresa Vignaroli, the English Language Learners supervisor in Loudoun County’s school district, and her colleagues to develop resources to help students of all levels learn English. They also created an after-school reunification program, focused on helping students who arrived as unaccompanied minors and the adults they are now living with get to know each other better.

At the Internationals Network for Public Schools—a network of 19 schools and programs in New York City, the San Francisco Bay Area, and greater Washington, D.C.—the focus is on helping high-school-aged newcomers, who are often behind on credits, cover the ground they need in order to graduate.

Instead of focusing only on academics, teachers and administrators make sure to acknowledge personal strengths of immigrant students as well. 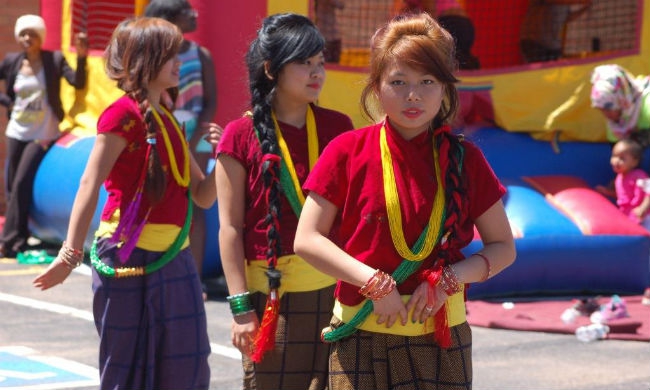 The Aurora Welcome Center hosted refugee and immigrant families from across the world including Mexico, Bhutan, Eritrea, Iraq, Ghana, Nigeria and Senegal at their June 2015 cultural event.

“What’s really central is taking an asset-based approach,” says Joe Luft, the executive director of Internationals Network. “At the end of the day, these are young people who have almost always made tremendous sacrifices to come here, and it’s really important to remember them as people.”

In less-specialized schools, teachers and staff may not be aware of newcomers’ individual strengths and needs, and creating ways to help staff get to know their students is essential. In Aurora, a 39,000-student school district that currently has students from 131 countries, the Aurora Welcome Center’s staff has started creating individual profiles detailing students’ educational and personal backgrounds to share with teachers and counselors.

But challenges remain, even in the basics of teaching newcomers. Many schools, especially in places where immigration is a newer phenomenon, struggle to find textbooks and curriculum that meet the needs of newcomers. A fifth grader who is just learning English may be at a kindergarten reading level, but a book aimed at a kindergartner doesn’t meet that student’s language or development needs.

Short says that in all but six states, teachers are not required to study how to work with English language learners in order to get certified. In some cases, that means individual principals or schools must train themselves as their districts play catch up.

Jean Burke, the director of English Language Acquisition for Aurora Public Schools, saw the change during her time as a principal at Lansing Elementary School, as the number of students learning English increased dramatically.

“It was clear to me that no one, including myself, on the staff was really well-versed in working with students whose first language wasn’t English,” Burke says. Burke sought out a grant and training for her teachers that focused on working with English language learners and made other subtle adjustments to the school, like adding welcome signs in other languages and building relationships with translators.

In Aurora, the school district’s programs have started to catch up with the needs Burke spotted years ago. The Aurora Welcome Center event in January was just the second time the district held an event to introduce newcomer families to one another, says Silvia Tamminen, the coordinator of the center.

“They come from all corners of the world, but they have something that unifies them—they really want to see their students be successful in school,” she says. 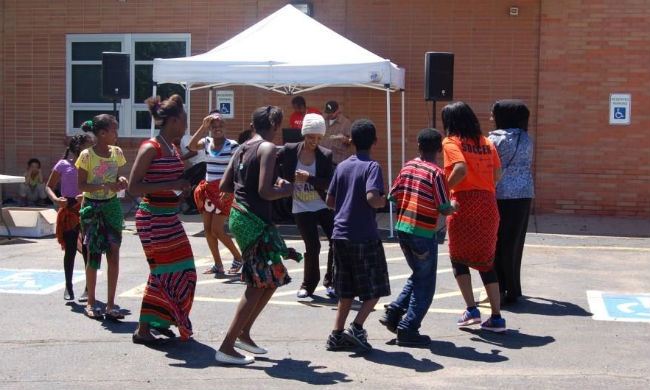 One of those students is 18-year-old Ibrahim Ibrahim. He lived in the Kakuma Refugee Camp in Kenya for 10 years before arriving in Colorado. Ibrahim, who is now enrolled as a senior, already knew a little English, but was surprised by some of the laws and policies in US schools. At the Aurora Welcome Center event in January, he introduced his mother to a school counselor to make sure that a recent absence wouldn’t get him in trouble for truancy.

He spends his Wednesday mornings in a class with a group of other newcomers and says he’s slowly building friendships and settling in. His main focus is on graduating so he can enroll in college and study radiology.

“When we came, we did not know Aurora,” Ibrahim says. “But I like Colorado, and I’d like to stay.”