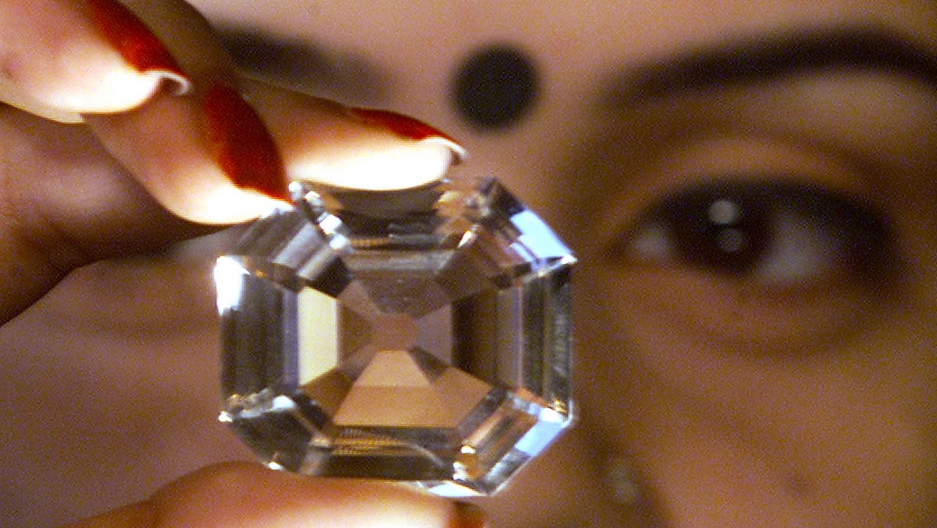 A woman holds a replica of the Koh-i-Noor diamond, during a diamond exhibition in Kolkata in 2002.

India was once considered the "Jewel in the Crown" of the British Empire. Now India wants its jewel out of the crown and sent back.

The jewel in question is the Koh-i-Noor diamond, which is literally set into one of the crowns of Britain's royal family. You can see it on display with the other crown jewels in the Tower of London.

For many Indians, it’s a symbol of colonial subjugation and exploitation. So some citizens have filed a lawsuit to get it back. The case is currently being heard by the Supreme Court of India. But there’s controversy, as the government does not appear to be whole-heartedly behind the project.

The massive diamond was dug up in a mine along the Krishna river in southern India centuries ago. Geologists can be certain of that. But it’s not clear when. The Koh-i-Noor was first documented as a treasure in the 13th century, but Indian legend says it’s been known for at least 3,000 years.

Its history has paralleled the history of South Asia, passing from one dynasty to another as empires rose and fell.

It was originally 793 carats, but was re-cut in the 1600s down to 186, then cut again in the 19th century to suit European fashions down to a still-massive 105 carats.

Its name, Koh-i-Noor, means "Mountain of Light" in Farsi, the language of Iran. The name is said to have been given to it in 1739 by the Shah of Iran. It was seized by the Persians during an invasion of Mughal India.

Later in the 1700s it fell into the hands of a rebel Persian general, who went on to set himself up as the Amir of Afghanistan. One of his successors fled, after a palace coup, and sought refuge with the Rajah of Punjab, in northwest India. The Rajah demanded the diamond as payment for providing sanctuary to the exiled Afghan king. So he passed it over to the Punjabis in 1813.

In the 1840s, the Punjabi state ran into conflict with the British East India Company, which represented British power in the subcontinent at the time. Two savagely fought wars — the Sikh Wars — ended with the extinction of the Punjabi state, through a treaty signed at their capital, Lahore, in 1849. Here are the first three articles of the treaty:

I. His Highness the Maharajah Duleep Singh shall resign for himself, his heirs, and his successors all right, title, and claim to the sovereignty of the Punjab, or to any sovereign power whatever.

II. All the property of the State, of whatever description and wheresoever found, shall be confiscated to the Honourable East India Company, in part payment of the debt due by the State of Lahore to the British Government and of the expenses of the war.

III. The gem called the Koh-i-Noor… shall be surrendered by the Maharajah of Lahore to the Queen of England.

The diamond was taken to London and presented to Queen Victoria in 1850.

India asked for the Koh-i-Noor diamond to be returned immediately after independence in 1947, but it was ignored.

Now a nonprofit group is leading the charge to get it back, and its case is currently before the Supreme Court in Delhi.

On Monday, the Indian government’s top lawyer, Solicitor General Ranjit Kumar, testified to the court that the Brits got the gem fairly. The Koh-i-Noor, he said, was "neither stolen or forcibly taken, as it was given by the successors of Maharaja Ranjit Singh to East India Company as compensation for helping them in the Sikh Wars."

It was an astonishing statement. It’s inaccurate on many levels, so the best interpretation is that the statement was ill-researched. It provoked outrage among many Indians.

So a day later, the rest of the government threw the solicitor general under the political bus. It said his opinion is not that of the government, and that in fact the government "will do everything to get it back, in an amicable manner." It described the Koh-i-Noor as a "valued piece of art with strong roots in our nation's history."

It’s not clear why Kumar said what he did to the Supreme Court. Some critics have described his statement as a clumsy attempt to block the claim for the return of the gem. But why? It may reflect a certain amount of confusion in India even today in how to relate to the hundreds of kingdoms and principalities that existed in India before and during British rule. The families that ruled those states still live in India and Pakistan, so are they the real owners of any returned property?

Britain has not responded to the new Indian claim. But Prime Minister David Cameron spoke to Indian news media about the issue during a visit in 2010. He said London would have to say no, because "if you say yes to one request, you'd suddenly find the British Museum would be empty."

It’s also not clear if India is the rightful successor state. Most of the historic kingdom of Punjab, which Britain conquered in 1849, is now in Pakistan. And Pakistan lodged its own claim against Britain for the return of the diamond last year. Iran and Afghanistan also have claims, since they both claim to be the last rightful owners.

It might also be noted that Iran still has many large precious diamonds and other treasures that were looted from Delhi at the same time as the Koh-i-Noor, during the Persian invasion of 1739. India isn't yet asking for them back.