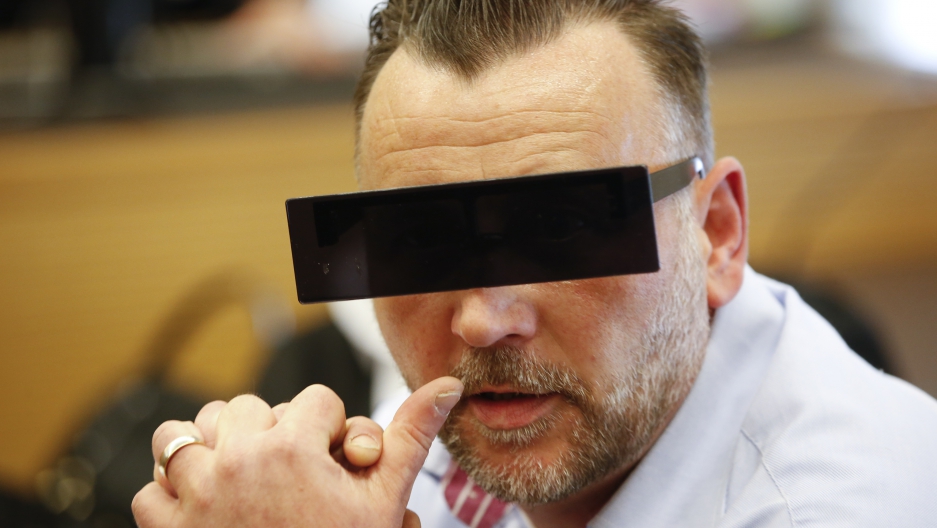 Lutz Bachmann, co-founder of Patriotic Europeans Against the Islamisation of the West (PEGIDA), waits in a courtroom for his trial to be charged with incitement over Facebook posts in a court in Dresden, Germany, April 19, 2016. He's wearing dark, rectangular sunglasses as part of his protest against German censorship laws.

His supporters enjoy that he's "telling it like it is." But in Germany, that kind of talk can get you into trouble.

It happened this week in Dresden. The founder of the anti-immigrant, anti-Islam party Pegida went on trial for hate speech. His name is Lutz Bachmann, and he's been charged with inciting hatred for a Facebook comment in which he allegedly called refugees "cattle," "brutes" and "trash."

Pegida is an acronym for Patriotic Germans Against the Islamization of the West. The BBC's Damien McGuinness describes it as "a movement, rather than a political party." According to McGuinness, Pegida is the most radical end of a large minority of German society that is nervous about the numbers of refugees and migrants coming to their country.

And its founder is being tried for making comments that prosecutors say are causing ethnic hatred and even violence. "Over the past year, we've had 1.1 million asylum seekers arriving in Germany. And during that period, in 2015, there were almost 1,000 illegal offenses carried out against refugees and migrants. That included almost 100 cases of arson on refugee homes," McGuinness says.

Bachmann and his supporters are saying this is a case against free speech, a concept that's far different in Germany than in the US. McGuinness says it doesn't even matter if Bachmann's words contributed to violent acts if they were still discriminatory. Part of the German constitution states that each individual is worthy of respect. Some of that is because of the country's history with the Holocaust and Hitler-era discrimination laws.

"That's why comments allegedly made by Mr. Bachmann are so controversial here. They're seen here as lumping together one ethnic group into a category. And that is the beginning of discrimination."

Bachmann told prosecutors he didn't even post the Facebook comments in question. Someone else did. He followed that by stating that even though the words are not his, they are still valid and Germans should be allowed to say and write such things. McGuinness isn't so sure about that, or the idea behind this being a free speech case. "Whenever you have far-right populist groups saying their free speech is being oppressed, that's usually because the things they want to say are against the German constitution."

Ultimately, this could be good news for Bachmann and Pegida. McGuinness says his group has been losing steam lately, and this trial puts him back into the spotlight. If he's found not guilty, he'll avoid serving time. And if he's found guilty, well, that might actually be something he benefits from.

"He quite enjoys the role of a martyr," McGuinness says.