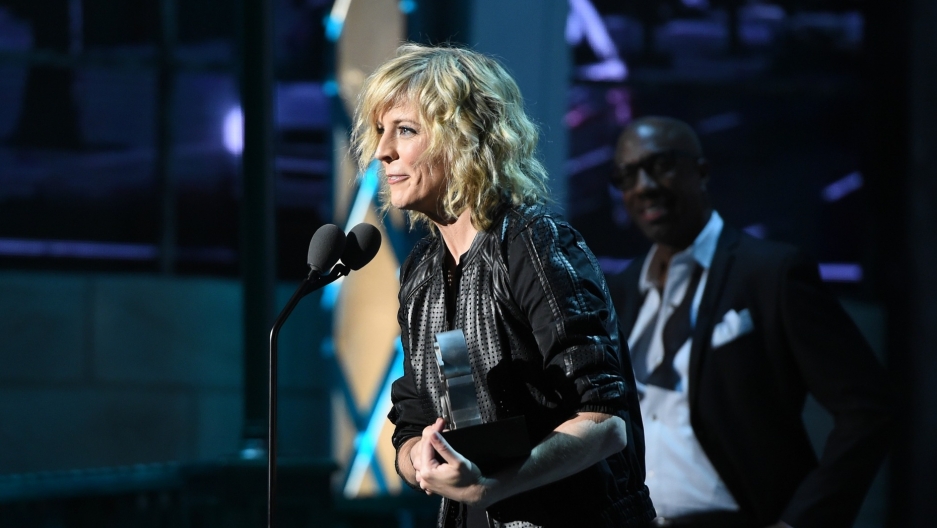 The first time I saw Maria Bamfordonstage I was so overcome with surprise and delight that I spent most of her set gasping for air, hands over my mouth, tears streaming down my cheeks. It was love at first sight, and I've spent most of the time since watching her web seriesover and over along with any clips of her standup I can find. The inside of my heart looks a little like this:

So when I found out that Netflix gave Bamford her own show,my insides did a happy dance. Let this serve as a Maria Bamford primer for the uninitiated, and a refresher for everyone who is already a member of The Maria Bamford FanClub (if anyone wants to make buttons, I'm in). The full season of "Lady Dynamite" will be available for streaming on May 20th, and you need to be ready.

Let's start with Ms. Bamford in her most accessible form, standup. She performed on "The Late Show with Steven Colbert" earlier this year, in a four minuteset that highlights all the things she does best: amazing vocal impressions, goofy self-deprecation, and wild animal noises.

I also found a significantly longer gem: a full 15 minutes of Bamford on "John Oliver's New York Stand-Up Show." This is a great way to ease into the weirder aspects of her humor. Does Bamfordmake lots of grumbling monster noises? Yes. Is she able to capture both sides of uncomfortable social interactions in a way that feels far to familiar but is still funny enough that you laugh? Yes. Does she recite my favorite line about online dating ever at 13 minutes and 14 seconds?Yes, she does, and it's amazing.

Finally, nearest and dearest to my heart: "The Maria Bamford Show."This is best watched in order, andeach episode is so short --- at only three or so minutes --- that it's easy to whip through them in one sitting. The series is essentially a one-woman show for the digital era, with Bamford playing herself along with everyone from her therapist to her mother to her high school nemesis. It's uncanny how she is able to create a cohesive storyline using just herself, poor lighting, random costumes, and her pug Blossom.

The whole show is anchored by the fact that Bamford, in both real life and the web series, has gone through mental health treatment for a variety of disorders,including anxiety, bipolar, and OCD. Watching the people around her respond to that information, as well as the ways Bamford navigates everyday life, is both very very funny and refreshingly familiar for anyone with a history of mental health issues.

Here are the first two episodes to get you started:

You can watch the full series of web shorts here, and the new season of "Lady Dynamite" on May 20th.