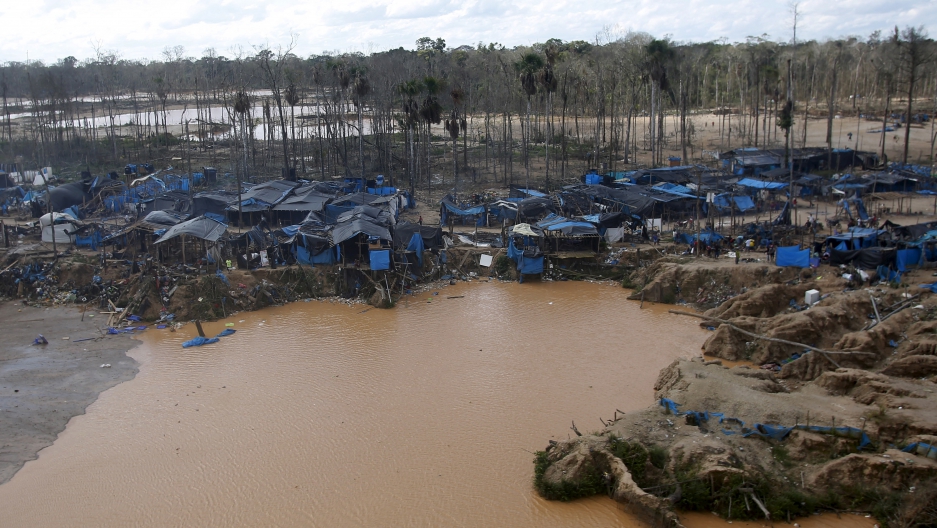 A view of an illegal gold mining camp in the southern Amazon region of Madre de Dios, Peru in July 2015.

Organized crime networks in Latin America have long made their money off of drugs.

But over the past decade, as gold prices have soared, cartels have increasingly turned to illegally mining the metal to earn cash.

That's according to a recent report from The Global Initiative Against Transnational Organized Crime, which outlines the impact this crush of illegal mining is having on displaced communities, forced-labor miners and sex workers who are trafficked to serve this burgeoning industry.

“When you arrive in these illegal mines, you just realize that there is like a chain of victimization,” the report’s author, Livia Wagner, said in an interview with PRI's The World.

In illegal mines, workers are forced to extract gold in dangerous conditions across Latin America, and the report documents women and girls as young as 12 from all over Peru being trafficked to work in brothels near the mining outposts.

Many of the girls are lured by promises of work, and once they arrive deep in the Amazon, Wagner said, “there is just no way out for them.”

In some places, like Peru, mine owners are in cahoots with human traffickers. In places like Colombia, insurgent groups including the FARC actually manage the mines.

In addition to the human cost, the report outlines the environmental impact of widespread illicit gold mining.

The neurotoxin mercury, which is used in illegal mining to separate gold from sediment, is seeping into waterways, soil and air around mining sites.

At one illegal mine in Peru, Wagner said she watched a miner mix sand and mercury with his bare feet.

“This was just very shocking for me,” Wagner said.

After traveling for an hour through dense jungle to reach an illegal mine, “suddenly everything opens up, there are no trees there anymore, and all you can see is dead trees, like skeletons,” Wagner said.

When shopping for jewelery, consumers can look for gold that has been certified as coming from legal sources. But determining the source of precious metal in electronics and other products isn’t so easy.

“If you go and want to buy a laptop and say, OK, where does the gold come from that’s in your cell phone or the laptop?” Wagner said. “There, it’s a little more difficult.”