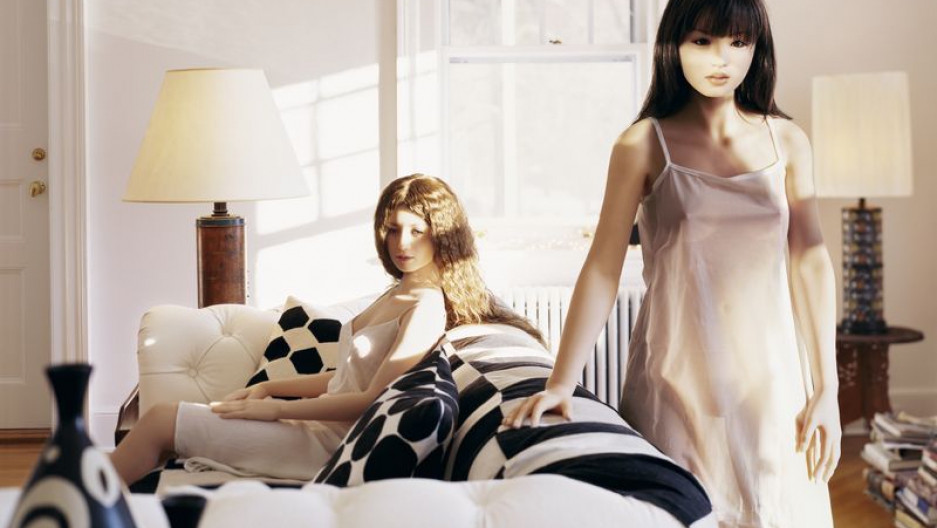 Laurie Simmons began taking pictures professionally as a young woman in the 1970s. She shot homey scenes — kitchens stocked with food, living rooms with sofas and TVs. Except really tiny, because she only photographed doll furniture.

Simmons’ daughter is Lena Dunham. Before the TV show “Girls,” Dunham’s breakout film “Tiny Furniture” was inspired by her mother’s art. Simmons also plays the artist mom, Siri, in the film — a crabbier version of herself.

“It's a little bit painful because I still find Siri to be a sort of excruciating character and I give lots of credit to my daughter for getting me to go to that place, to be that person in the film,” Simmons says. “Of course people who saw the film and were confused about it and knew that I was her real mother just assume that that's who I am. ... I do feel sort of embarrassed. I don't know how I even did that.”

Simmons’ says she and her daughter are very dissimilar in how personal they get in their art and in public. She was ultimately willing to play a character in Dunham’s film, however, because she understood the art her daughter was trying to create.

“I know it's shocking to say this, particularly coming from a family that has Lena Dunham in it, but we're actually very private,” Simmons says. “I did a series of pictures of my parents very early in my work life and I felt like I was mining my past and photographing my parents in an effort to understand them more. ... At first I didn't want to be in [the film], but then I understood that she was trying to do something, that the exploration was similar to things that I had done, so I needed to take it seriously.”

Simmons work involves photos of dolls and miniature furniture, and critics have connected Simmons’ work with that of her friends Cindy Sherman and Sarah Charlesworth, fellow photographers who were also subverting outmoded feminine ideals. Simmons, however, says she was at first embarrassed by her work.

“I felt very embarrassed about what I'd done,” Simmons says. “I'd come to New York when conceptual art and video and all of this very intensely rigorous, intelligent and conceptual work was happening and I just thought ‘Oh no, this is like girl play.’ Like playing is so taboo for adults. I didn't really want to enter that space. I wanted my work to feel more rigorous. So there was always that edge of feeling kind of embarrassed.”

Simmons, however, had always faced difficulty trying to establish her legitimacy as a female artist, even within her own family.

“I kind of sneaked into art school,” Simmons says. “Because somehow my parents saw that I could potentially be someone's wife with artistic talent and perhaps I would show my paintings in the PTA show or the synagogue show, or the church show. So they had their idea about what it could be. And my mother said ‘You can go to art school if you get a teaching degree to fall back on,’ which is what mothers always said: you needed something to fall back on, you know, in case you got divorced. So I did. You know, I did go to art school, but I managed to never get the teaching degree.”

The photographer thinks, however, that her art may have inspired her own daughters.

“My daughters always say, you know, 'How did you figure it out, how did you make it happen?’ Because they can see that a lot of their friends' parents or people that they know didn't really do it, didn't really go to New York and live the life and pay the dues. So there they gave me a lot of praise. But of course, as you know, when you're in the middle of it, you're not thinking about how special you are. You’re thinking about how you’re going to make it work.”