An ancient Etruscan bronze statuette of Herakles dating from the 6th or 5th Century B.C.

For hundreds of years, scholars have been debating the origin of the Etruscans.

The Etruscans were a powerful clan with an alien tongue and strange customs. They emerged in what is now central Italy sometime around the 6th century BC.

And no one is more obsessed with the Etruscans than the Italians themselves.

“I think that 90 percent of [Italian] taxi drivers can tell you something about the Etruscans,” quips Francesco Cini, a resident of Florence who recently directed a major excavation of an Etruscan well.

Cini describes the Etruscans as “a very charming ancient population.”

But there were hundreds of groups migrating around Europe at the same time, and the Etruscan language has been dead for more than a millennium. So why should we care about these guys?

The answer, according to Yaroslav Gorbachov, a linguistics professor at the University of Chicago: “The Etruscans are basically the teachers of the Romans.” Gorbachov explains that the Etruscans were the first kings of Rome and were hugely influential on the Romans. They passed along elements of Greek civilization — like the invention of alphabetic writing — and essentially helped plant the seeds of Western culture.

“A lot of what the Romans did, a lot of their beliefs, came from the Etruscans,” says  Gorbachov. “So they are the teachers of our teachers.”

Their language may be dead, but people are still using Etruscan words today — words like “people.” And linguistics is just one tool scholars are using to figure out whether the ancient historian Herodotus may have been right about how the Etruscans first reached Italy.

According to Herodotus, the story goes something like this: Around 800 BC, there was a famine in Lydia (in what is now western Turkey). Eventually the king, “divided the people into two groups, and made them draw lots, so that the one group should remain and the other leave the country.”

It’s unclear which group this scenario actually favored, but according to Herodotus, the castaways eventually ended up in Italy. But many of Herodotus' stories don't add up, says Gorbachov. So this Etruscan story tended to be dismissed too.

But Gorbachov says Etruscan scholars have taken a second look at it — to the extent that some have become “semi-convinced that it might be true.” 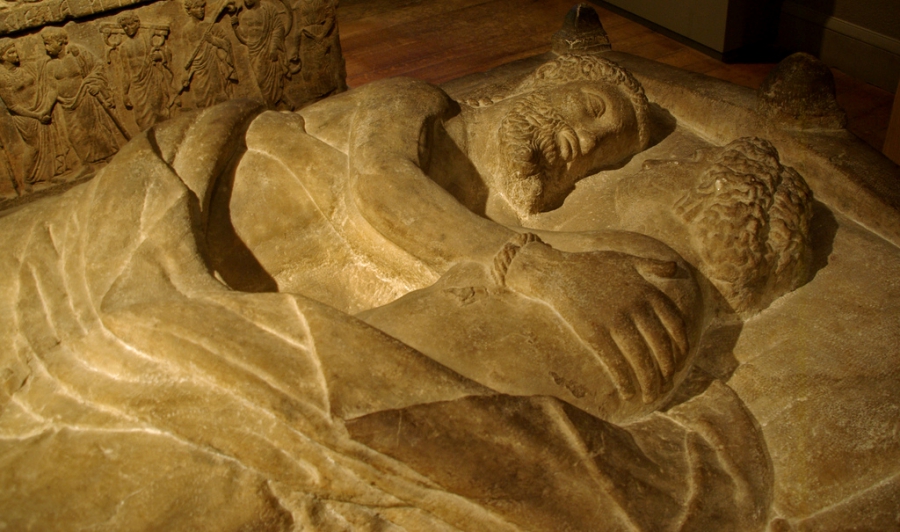 Over the past 15 years, linguists have uncovered tantalizing clues. Similarities between the Etruscan language and certain languages of Bronze-Age western Turkey are uncanny. There are certain words, Gorbachov says, that could only have been borrowed from the Lydians, and their neighbors the Louvians. For example the Etruscan word for wine, matu, “looks precisely like the Louvian word for wine,” (mattu).

And the Etruscans shared some unique customs with the Lydians and Louvians as well — like the practice of Herosposy, which Gorbachov describes as “a form of divination from inspection of entrails. ... Gleaning the will of the Gods through inspecting the livers of sacrificed animals.”

In 2007, Italian geneticist Alberto Piazza found what seemed to be the smoking gun. Studying paternally inherited DNA from people living in three formerly Etruscan communities, Piazza discovered a residual genetic link to Turkey. And a different study found that a local breed of cattle also shared a genetic link with Turkey.

Anthony Tuck, a professor of archeology at UMass Amherst who has studied Etruscan civilization for 27 years, was in the ancient Etruscan town of Vescovado di Murlo the day news of Piazza’s DNA discovery broke.

“It was amazing,” Tuck recalls. “Serbs and Kosovars, and North Africans who live in Vescovado di Murlo were clapping and honking horns.”

Tuck says the Tuscans had “kind of a scratchy” relationship with these immigrants. All of a sudden, Tuscans discovered they too were immigrants.

But all isn't exactly settled. Unlike the more recent arrivals, Tuck is not convinced the Etruscans really were from Turkey.

That’s the thing about the Etruscans mystery; few clues remain and they can be interpreted many different ways.

The eastern words and customs found among the Etruscans? They could easily have been borrowed. Ideas, religions and catchphrases circulated in ancient times, just as they do today.

What explains that DNA overlap?  Turkish women could have circulated too — sold or bartered in ancient chattel markets.

In 2013, another study that was conducted with the same groups, only using maternally inherited DNA, showed no genetic link to Turkey. These results backed the theory of another ancient historian, Dionysius of Halicarnassus, who claimed the Etruscans were just always there.

But maybe the real debate isn’t between Herodotus and Halicarnassus, but whether it really matters.

“What makes someone Etruscan? Is it purely a linguistic question?” Tuck asks. “We don't really do ourselves a whole lot of favors when we kind of paint with big broad strokes and talk about mysterious cultures.”

Tuck says culture is a much more complex entity than just the question of who contributed to your genetic identity 30 or 40 generations ago.

It’s true: Etruscan culture can’t just be explained with a blood test. But the desire to understand exactly how they came to be in Italy is a legitimate question that continues to motivate scholars like Gorbachov.

“If you take these pieces of evidence — the textual, the linguistic, the genetic, the archeological and cultural-material — in isolation, then some of the pieces look inconclusive, some of them look iffy,” Gorbachov says. “But if you take them all together, and they all seem to point east.”

“I am personally convinced that Herodotus was, for once, right.”

Many native Italians are too. Like Francesco Cini, who “would be excited to know that I have some Turkish DNA in my blood — just to know it's a part of my story.”

It’s kind of like learning you have a drop of Viking blood, the new “my great-great-grandmother was Native American.” Maybe the Etruscans really were the original Italians.

But then again, what kind of story is that?

Also in this week's podcast is Carol Zall's exploration of her own DNA. You can read more about that here.