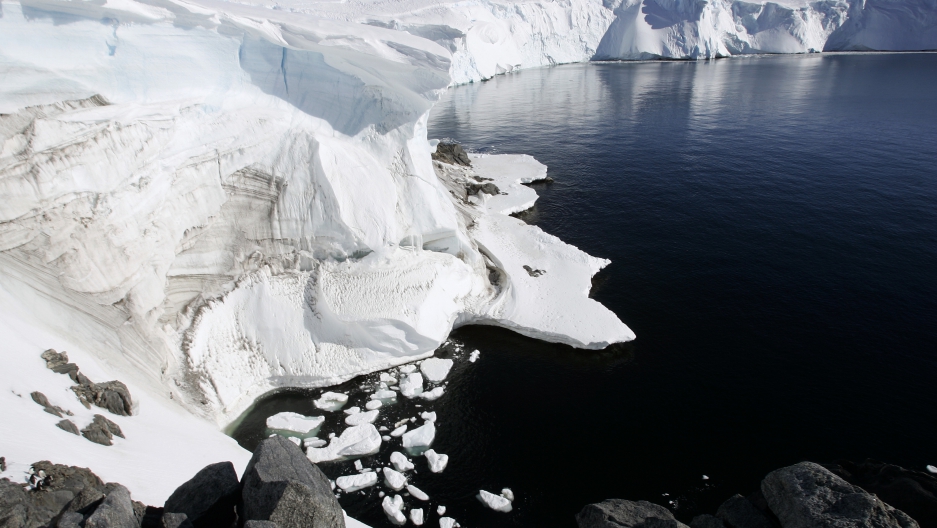 Melting ice shows through at a cliff face at Landsend, on the coast of Cape Denison in Antarctica in 2009.

Scientists have long warned about the potential for the West Antarctic Ice Sheet to dump an incomprehensible amount of ice into the sea as global temperatures rise.

But their warnings were generally about a future hundreds of years away.

Now, a new report suggests that future could be much closer.

It found that West Antarctic melt could add more than three feet to global sea levels by the end of this century.

Related: South Florida Republicans are fed up with their party leaders on climate change

But what exactly is the ice sheet, and why is it such a threat?

“In most areas of the ice sheet, you look around and you just see white, just a flat white expanse going off in all directions,” said retired NASA glaciologist Robert Bindschadler, who over the past three decades has spent more than 18 months on the West Antarctic Ice Sheet.

The sheet makes up only about 10 percent of Antarctica, but it’s still massive: as big as Europe, and a mile thick in some places.

Most of it is relatively flat, white ice. White-outs caused by swirling snow are common, and the wind can be punishing, but Bindschlader describes the topography of the interior as boring.

Around the edges of the sheet, though — where ice suddenly meets the warmer ocean in a vertical cliff — it’s much more dynamic.

Fast-moving ice streams flow. Tiny cracks form in the ice as the sheet slides slowly downward toward the sea, cracking like silly putty pulled too far and too fast. Those cracks widen into crevasses hundreds of feet deep. And every once in a while, huge chunks of ice crack off into the sea and are set adrift.

Glaciers calve, as it’s called, all around the poles. The chunks are larger in the West Antarctic, as big as the state of Rhode Island. This ice sheet is more worrisome than any other not just because of its size, but because the entire sheet, not just its edges, is incredibly unstable.

So unlike most ice sheets, water can melt this one from below. It also melts the underside of the ice shelves at the edges of the continent, the last seaward extensions of the glaciers that act something like an anchor, preventing more ice from sliding into the sea.

Bindschlader says you can’t feel the instability of the ice sheet when you’re standing on it.

“Antarctica is so big that when we talk about this one-meter rise in sea level as very likely by the end of this century,” Bindschlader said, “that actually is just a one percent reduction, or a one and a half percent reduction, in the size of the ice sheet.”

Bindschalder is retired now, and he spends a lot of his time doing outreach, explaining the link between melting ice and rising seas.

He said it is hard to explain to people why the ice sheet is such a threat when the vast majority of it looks so tranquil and solid.

“We can show them glaciers that have retreated markedly, and they get that,” Bindschlader. “But we don’t have real pictures to show them of these changes happening in the ice sheet that are actually at a much larger scale.”

“That’s part of the problem, you can’t take a picture of some of these really large things.”

But when you’re standing on the ice alone under a deep-blue Antarctic sky, Bindschadler says the destructive force of the ice beneath your feet is never far from your mind.

“You are there in the midst of 'big nature,'” Bindschlader said.

“It’s very much a sense of standing there and thinking, this is the piece of ice that really matters, and it will, where I’m standing right now, impact the lives of people worldwide.”

Related: South Florida Republicans are fed up with their party leaders on climate change

A note: The sounds of wind, ice and snow featured in the audio version of this story were recorded by audio artist Doug Quin in Antarctica and Greenland and provided courtesy of the artist.