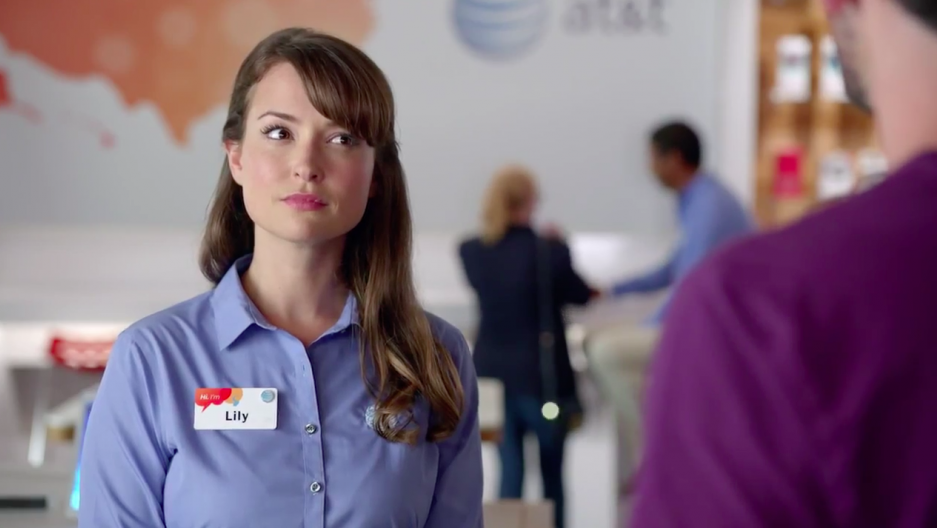 Milana Vayntrub as Lily in a recent AT&T commercial.

You might recognize Milana Vayntrub as Lily, the bubbly hostess in AT&T commercials, but not long ago she decided to take the camera into her own hands.

Vayntrub and her father recently went on vacation to Greece, and she says she had a revelation there. It's something that makes sense when you learn her own story.

“I very quickly realized how ridiculous that is, [to vacation in Greece],” she says in a documentary she made. “It’s an insane time to be on vacation here, because the country is experiencing not only financial turmoil, but also a giant influx of refugees that they can’t support.”

She decided to cancel her trip back home to the US — something she didn't tell her father, because she knew he would worry about her safety.

She flew to Lesbos, where she and a friend started volunteering, helping refugees who were coming ashore. She made a short documentary about the experience, and co-founded Can't Do Nothing, an organization that aims to connect people with causes they care about and assist refugees around the world.

Vayntrub was born in Uzbekistan in 1987. When she was 2, her parents fled the Soviet Union after suffering through years of religious persecution and limited options for work.

"When the opportunity to leave was available, we took it," she says. "It was a long immigration and refugee process. It took us about a year and two months to go from Uzbekistan to Vienna to Italy and eventually to the United States."

They settled in California, where Vayntrub lives today.

The documentary includes news footage of the Vayntrub family during their long journey to the US.

She says the process of making the documentary was eye-opening.

"There's no way to prepare yourself for seeing someone touch safe land for the first time in who knows how long — weeks, months," she says. "That's definitely a shift in perspective when you see someone who's grateful to be alive and you think about how lucky we are to take being alive for granted."

"We were only one stop on their very long journey to wherever will accept them, wherever they can find a home."

Shortly before releasing the documentary, she sent a copy to her father and apologized for not telling him earlier.

"He said he was really proud of my sneaky heart," she says with a laugh. "All in all, he likes my sense of doing the right thing, or adventure. Maybe he's just proud that I got away with a lie."

In January 2017, Vayntrub joined protests in Los Angeles against President Donald Trump's travel ban on people from seven predominantly Muslim countries.
She says she understands what it means to have to flee your home country, fearing for your life.
The refugees, she says, are "often very confused as to why they are so demonized. From their perspective, they've always had to run away from terror. They don't want to go to the US. They want to go home. The ban just tells refugees that they're not liked, they're not welcomed here at a time when they're running for their lives."