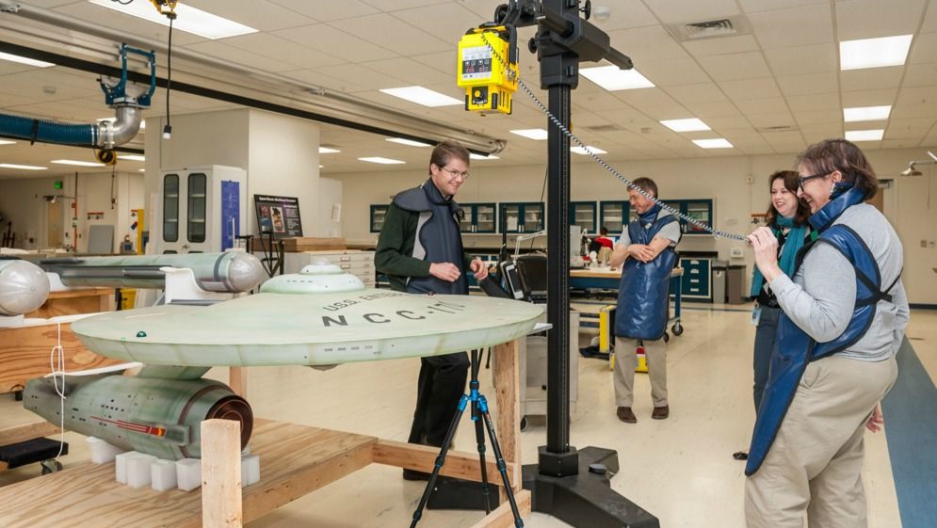 Conservator Ariel O’Connor uses X-ray fluorescence spectrometry to determine what metal alloy was used to construct the port engine of the Enterprise model.

At the Smithsonian National Air and Space Museum, they have curators for everything you would expect, like telescopes, missiles, planetary science and space shuttles. But Margaret Weitekamp’s collection is completely different.

It includes things like ray guns, board games, pins, hats, T-shirts and lunchboxes, all having something to do with space or space science fiction. Weitekamp’s title is Curator of the Social and Cultural Dimensions of Spaceflight, with a collection of more than 4,000 pieces of space-related ephemera to show for it.

The Buck Rogers XZ-31 Rocket Pistol isn’t even the coolest piece of super-nerdy space stuff in her collection. Weitekamp’s principal obsession these days is an object that may resonate more deeply than anything else in museum’s collection, at least for the generation that grew up when America was going to the Moon.

For the past 17 months, Weitekamp and a team of conservators have been working on the studio model of the Starship Enterprise from the original series of “Star Trek” — the very ship you saw fly by whenever you heard William Shatner say the words, “Space! The final frontier.”

The Smithsonian got the ship six years after NBC cancelled the original “Star Trek” in 1969. They had it out on the main museum floor for a while, but for the past 14 years, it’s been hanging in the gift shop. Weitekamp said the museum heard from a lot of “Star Trek” fans who considered it a sign of disrespect that the Enterprise was hanging there next to the tchotchkes and refrigerator magnets, and she wanted to move it.

“I had been looking for a new place for it for some time,” she says. “But it needed to be a permanent place where it would be well contextualized with other objects.”

She has finally found that place, and it’s the most eminent one in the museum. The entryway of the Milestones of Flight Gallery, home to all of American history’s most important planes and rockets — the very first thing that seven million people a year see as soon as they walk into the museum.

With the “Star Trek” model there, she says, “we could put the Enterprise model next to the Lunar Module, which is in some ways a contemporary spacecraft. We could put it next to the Telstar Flight Spare, which is the first telecommunications satellite and begins this world of television and communication.” 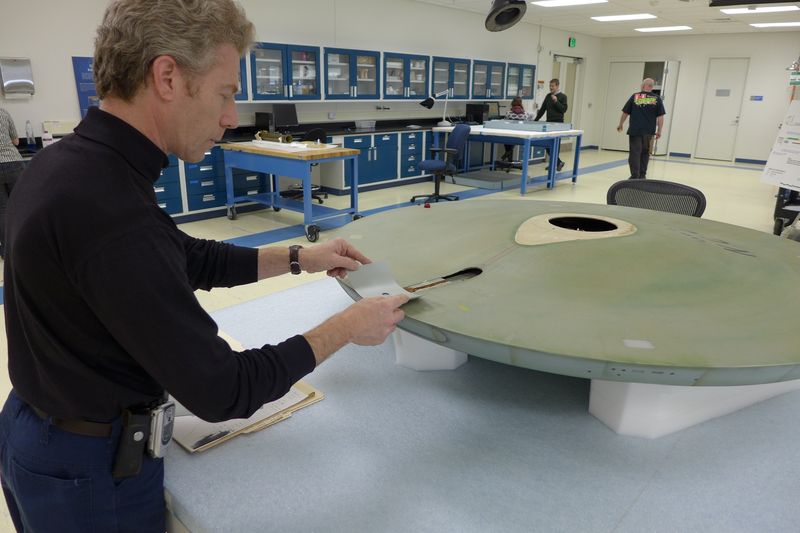 Museum Specialist David Wilson finds the exact color match to the grey paint inside the saucer.

All that’s coming soon. For right now, you will find the model lying on a workroom table. The conservators are working on a whole series of structural and aesthetic problems with the model.  They are cleaning and stabilizing the iconic letters spelling out the ship’s full name, “U.S.S. ENTERPRISE NCC-1701,” emblazoned on the top saucer, and they are looking to find ways to address the aging glue that held the hull together, among other things.

While the air and space museum is principally a history museum, they also teach a lot of science and engineering. According to Museum educator Beth Wilson, “we try to wrap some science, technology, engineering and math around everything that we do.” That’s easy because you can demonstrate principles next to real, honest-to-goodness scientific artifacts. Wilson teaches about lift and airfoils in front of the airplane the Wright brothers flew at Kitty Hawk in 1903. She can teach astronomy using the engineering model of the Hubble Space Telescope.

But “Star Trek” was science fiction, not science fact. How can you use something like that to teach? Weitekamp did just that at Cornell University before she was hired at the Smithsonian.

“I had been teaching classes on space history and science fiction because I saw those topics as very connected,” she says.

According to Wilson, “when the science is there and it’s good, and the imagination is there and it’s good, then the science fiction is great and you can use all that to teach.” She gives the example of the space station in the movie “2001: A Space Odyssey.”  “They wanted to create gravity, so they really looked at the science and how to make that spin and how that would create gravity,” she says. “So that is really good science.”

“Star Trek” is loaded with really good science too, which may be a reason why it has inspired generations of astronauts and space scientists. Astronaut Mae Jemison, the first African American woman in space, told C-SPAN, “I was very much a ‘Star Trek’ fan and I like to say that I watched it in the ‘60s, when it first came on.” She calls the show “wonderful, because it put women in non-traditional roles. Lt. Uhura was maybe the first woman that you saw every week on television who worked in a technical field.”

Nichelle Nichols, the actress who played Uhura “was instrumental in recruiting the first women and minority astronauts for NASA,” Jemison says.

As the franchise has lived on, that inspiration for real scientists has, too. As Wilson points out, “The X Prize is now trying to get people to invent a tricorder,” the handheld machine on “Star Trek” that would diagnose and heal injuries. “And they’re not calling it ‘your own personal health monitoring computer,’ Wilson says. “They’re calling it a tricorder for a reason.”

You’ll find that sense of inspiration in the Smithsonian too.

“The museum listens carefully to fans of ‘Star Trek’ in part because we're also fans of ‘Star Trek,’" Weitekamp says. “In fact, 20 years ago, the very first gift that my husband ever gave me was a little Lt. Worf figurine that he picked up when he was in Los Angeles. Being able to put those kinds of cultural objects on display allows the museum to really deepen the stories of the science and technology.” 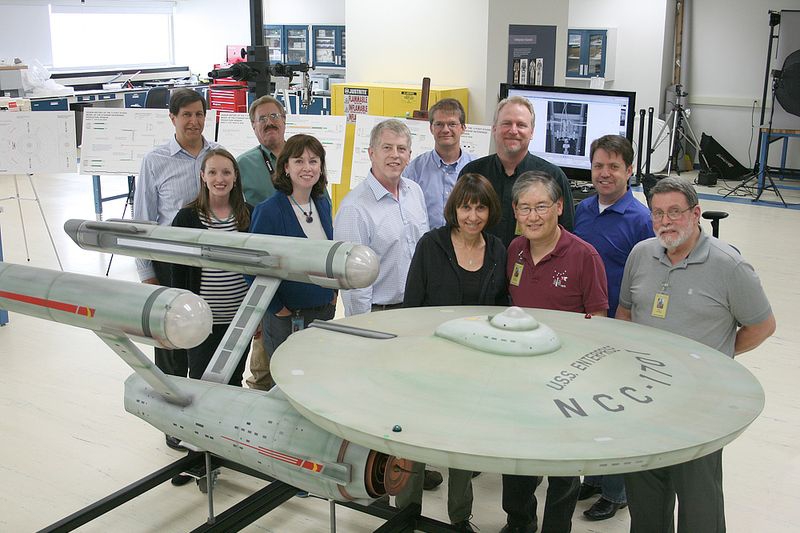