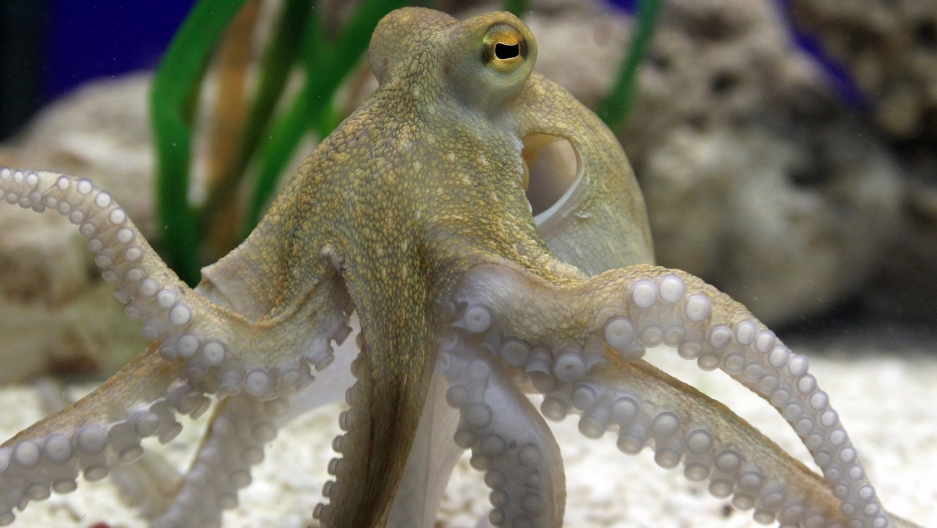 Octopuses, like this one at the Sea Life Centre in the western German city of Oberhausen, are known as good escape artists.

Aquarium manager Rob Yarrall says the lid to the octopus’ tank was left slightly ajar after maintenance one night.

"He found this rather tempting, climbed out,” Yarrall says, “and he managed to make his way to one of the drain holes that go back to the ocean, and off he went, and didn't even leave us a message, just off and went!"

"Octopuses are fabulous escape artists, and it's absolutely not surprising that he saw an opportunity to explore and he took it,” said Sy Montgomery, author of "The Soul of an Octopus."

According to Montgomery, octopus escapes from aquariums are common.

The drain pipe in the New Zealand aquarium was about 6 inches wide.

Octopuses can typically squeeze through an opening as small as their mouths, or beaks, as they are the only hard part of their body.

"Their muscles are less like our biceps than our tongues,” Montgomery said, “so they can flow in a way that, even if our muscles were detached from our bones, our muscles could not do."

A slime covering Inky's skin would have prevented it from drying out as he oozed from his tank to the drain that led to his freedom. And the suckers on his tentacles, which octopuses can use to taste food, would have also helped propel him across the floor.

"Each sucker can lift an enormous amount of weight,” Montgomery said.

According to Montgomery, a 3-inch-diameter sucker on a giant Pacific octopus can lift 30 pounds.

Montgomery says octopuses get out of aquariums so frequently not because of their Houdini-like escape skills, nor because they’re lonely — they’re solitary creatures — but because they are generally super curious.

"It doesn't mean that Inky was unhappy where he was,” Montgomery said. “Astronauts don’t go into outer space because they don't like Earth, they just want to see what else is out there."

Aquarium manager Yarrall says Inky was brought to the aquarium from a nearby reef just a few years ago, so it’s likely he'll be able to survive in the wild.

And while he didn't leave a note, there was a different telltale sign that he did, indeed, escape and wasn't stolen: a trail of water from his tank to that drainpipe of freedom.