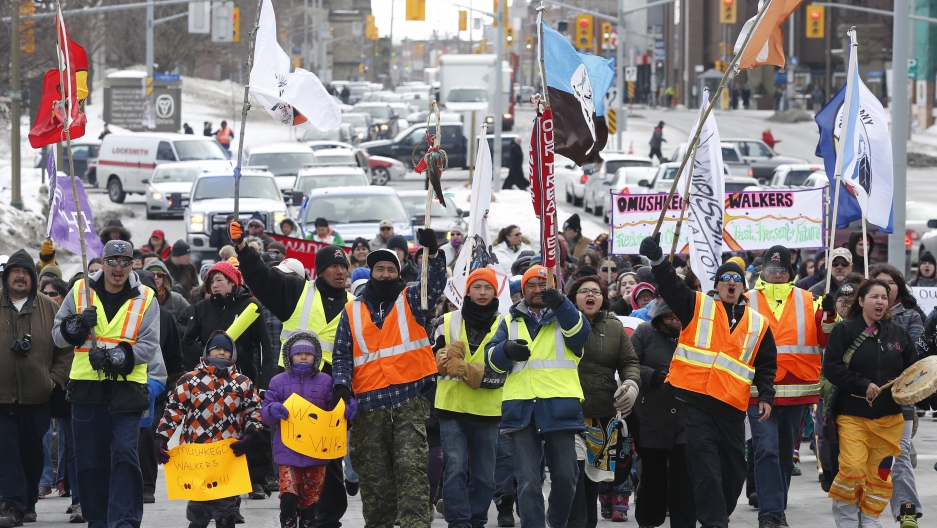 Members of the "Omushkegowuk Walkers" and their supporters march toward Parliament Hill in Ottawa February 24, 2014. The group walked approximately 1056 miles from the Attawapiskat First Nation in Northern Ontario, to Ottawa to raise awareness about First Nations treaty rights.

Last Saturday, there were 11 recorded suicide attempts in the Northern Ontario town of Attawapiskat — nine involving minors — and the First Nations community there has declared a state of emergency.

“We live in such an impoverished environment, it seems like so much despair, and at times it just seems hopeless,” says Jackie Hookimaw, who lives in Attawapiskat. “We’re getting sick from poor water, and poor living conditions. We're depressed and stressed out.”

But Hookimaw says this past weekend was overwhelming and scary.

“I heard that there were young kids that went outside the community, to the outskirts, and they wanted to hang themselves," she says. "Somebody spotted them in time and the police were informed, and they were picked up right away."

"They tried to hang themselves.”

Life in the remote community of 2,000 residents is tough. Hookimaw says some of her neighbors rely on hunting and fishing to make it through the harsh winters. They hunt geese, moose and caribou, and fish in the Attawapiskat River.

The town saw 100 suicide attempts since last September, and 28 recorded attempts in March. Some researchers have suggested suicide is among the leading causes of death among First Nations people, and that states of emergency like this latest one in Attawapiskat are not new.

Hookimaw’s great-niece, Sheridan, took her own life last year. She was only 13.

“Canada needs to act upon this and do something," Hookimaw says. "This cannot be tolerated anymore.”

Canada's health minister called the current crisis "one of the most serious and pressing tragedies" facing Canada. She sent an emergency team of social workers and grief counselors to the town.

There’s been speculation in the media that drug abuse, bullying, and physical and sexual abuse have contributed to Attawapiskat's wave of suicide attempts.

Amy Hookimaw, another relative of Jackie's, posted this on Facebook:

The news from Attawapiskat is provoking much consternation, and may spur a national conversation about higher rates of poverty, addiction and incarceration associated with many of Canada’s First Nations communities, and their higher rates of suicide.

Ontario's Regional Chief Isadore Day, who oversees health policies for the Assembly of First Nations, told the CBC that Attawapiskat requires immediate intervention: "What needs to be done is investment and a sustained approach to not just deal with the immediate impact or situation, but we need to get to the root cause and figure out what's really going on."

The news from Attawapiskat is heartbreaking. We'll continue to work to improve living conditions for all Indigenous peoples.