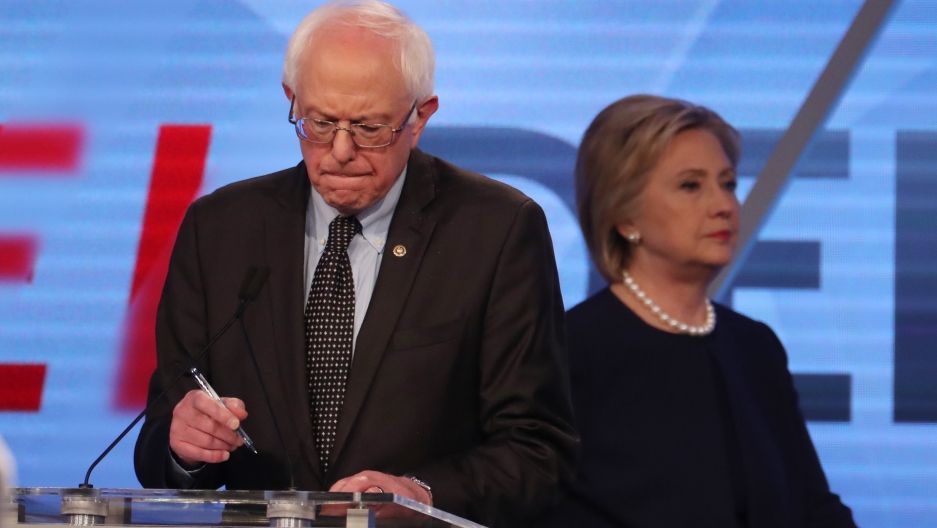 Many have commented on this wrap-up of the weekend's GOP and Dem primary delegate hauls, wondering about some of the apparent quirks in Democratic delegate apportionment.

How, many of you ask, could Bernie have won Wyoming 56 percent to Hillary's 44 percent, but still split the delegates with her 50-50?

The reasons are several, some of them unique to Wyoming and some not. Here's a quick explanation, which, I admit is likely to be frustrating to any Bernie backer.

1. Wyoming is a caucus, not a primary.

That means the voting took place in neighborhood groups, not in straight-up private voting. In fact, Saturday's caucus was for the purpose of selecting delegates to Wyoming's state Democratic convention at the end of May. Which leads us to:

2. Wyoming has a total of 18 delegates available.

Fourteen were up for grabs Saturday. Eight of those were in county districts across Wyoming, while four were at-large delegates. Another four are the much-talked-about Superdelegates.

While Bernie won his majority statewide, the way the votes were distributed across the counties helped determine the delegate haul. Winning huge in a sparse county isn't as good as winning narrowly in a populous county, when you factor in at-large results.

4. Every state has a rounding factor.

That's the percentage increment a winning candidate has to get to earn an extra delegate. In a big state like California, that factor is a relatively small 0.64 percent. That means that for every 0.64 percent gain in the popular vote, the winner earns another delegate. Wyoming is a sparsely populated state with only a handful of delegates up for grabs, so it has a gigantic 16.67 percent rounding factor. Essentially, Sanders would have to win by 16.64 percent to get that extra delegate. Because his big win was only 12 percent the available delegates were split 7-7. Here's a helpful grid laying out the numbers state by state.

5. Bernie still has a chance to come out on top in Wyoming.

The 7-7 split is actually a delegate estimate based on the county delegates who will go to that state convention in May. Plus there are the four Superdelegates that Bernie, of course, has said he'll try to flip his way.

6. None of this changes much for the race.

The complicated and weird dynamics in Wyoming, which play out in similar (but sometimes different) ways in other states, mean that even when Bernie wins by a lot, he doesn't necessarily make up ground on Hillary. And it helps show why he desperately needs to pull out a huge win in New York next week if he's going to have any hope of catching her by June.