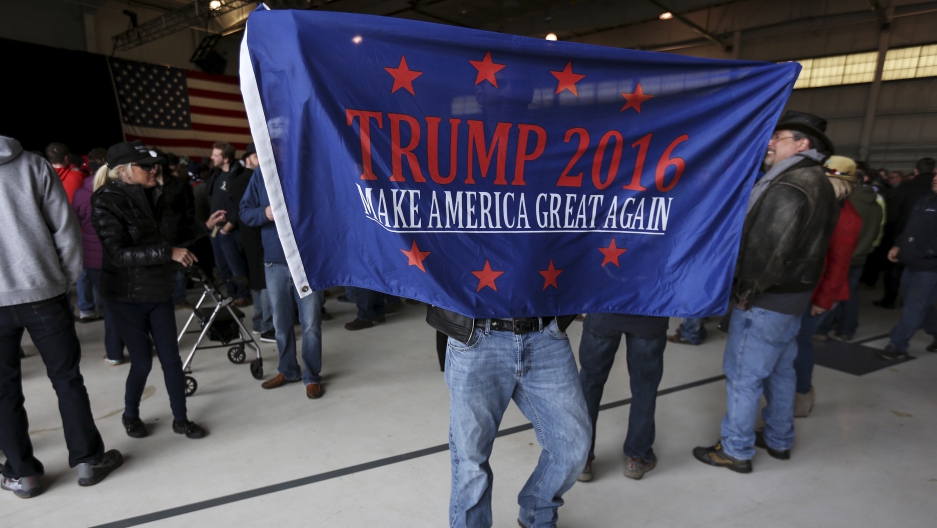 A supporter of Donald Trump holds up a banner as he waits for a campaign event to begin at an airplane hanger in Rochester, New York.

The Republican establishment wants to deny Donald Trump the Republican nomination for president, even though he’s the delegate leader, and a new TV ad wants to know if its viewers think that is wrong — right?

Well, yes, but the nationally airing ad is as much about raising money for the sponsor than it is about boosting the candidate.

“Donald Trump is the true frontrunner in the presidential race,” the boisterous narrator says, over a still image of Trump. “And we need you to pick up the phone and let us know your opinion.”

So what is Great America PAC? The Federal Election Commission says it’s a hybrid super PAC. But didn’t Trump say he was opposed to super PACs?

Great America PAC formed in February, but under a different name: TRUMPAC.

Great America PAC is a “hybrid” political action committee, meaning that like a super PAC, it can raise and spend in unlimited amounts to advocate for or against candidates. But it also operates as a traditional PAC, collecting limited amounts of money that is sent directly to a candidate.

Hybrid PACs were born out of the 2011 federal court case Carey v. Federal Election Commission that opened the door for such groups to exist, so long as they keep separate bank accounts for the two activities.

And the treasurer of Great America PAC is Dan Backer, the conservative attorney who helped to make hybrid PACs possible.

Backer, a conservative lawyer, is known for winning McCutcheon v. FEC, a decision that further opened the floodgates for money flowing into elections. The decision eliminated aggregate limits for individual donors.

Also behind the group is Bill Doddridge, founder of diamond retailer The Jewelry Exchange.

Doddridge and Beach are the biggest benefactors of Great America PAC, together contributing $50,000 to the group, though federal records show that Great America PAC is mostly a small-dollar operation.

Out of its 825 disclosed contributions through February, nearly 98 percent were in the amount of $5. In March, Great America PAC solicited donations via email, using Trump’s trademarked “Make America Great Again” slogan. A portion of the donations would be forwarded to the campaign.

Great America PAC forwarded about $3,300 to the official Trump campaign through February, according to its most recent FEC report.

Great America PAC raised roughly a total $73,000 through the end of February, but if its reported TV buys are any indicator, it raised at least $1 million since.

Great America PAC has reported spending about $1.1 million on expenditures such as TV ads, radio spots and email list rentals, according to FEC filings. The ad is airing primarily on satellite and cable stations, according to the group.

Trump frequently talks on the campaign trail about how much he dislikes super PACs, calling them “a disaster" and “very corrupt” during a Republican debate hosted by CNN in March.

“And frankly, I know the system better than anybody else and I'm the only one up here that's going to be able to fix that system because that system is wrong,” Trump added.

Great America PAC’s efforts also come at a time when the self-described “self-funding candidate” is being targeted in attack ads fueled by super PACs and “dark money” organizations. Just before Florida’s primary in March, a band of outside groups paid for more than 4,300 TV ads attacking Trump.

Whether or not Trump has changed his tune on super PACs is uncertain. Trump campaign spokeswoman Hope Hicks did not respond to requests for comment.

This story was originally published by the Center for Public Integrity.