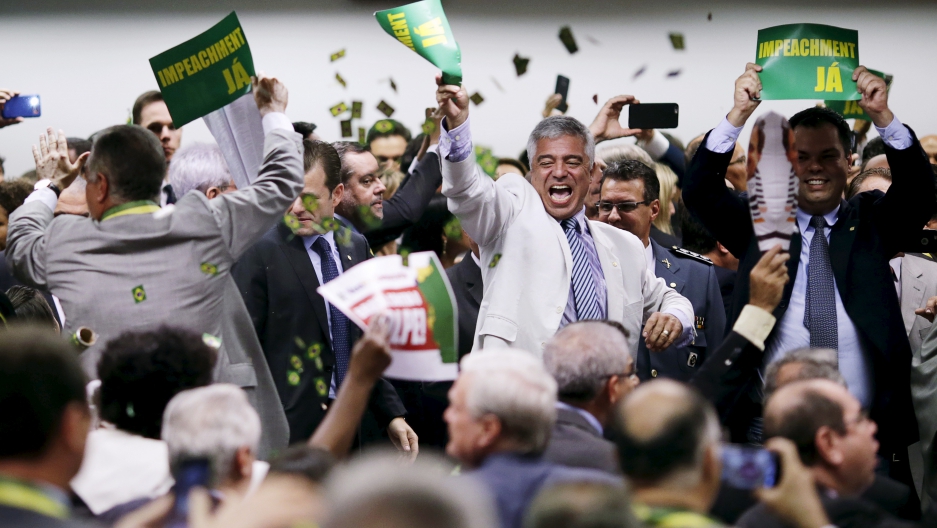 Congressional committee members celebrate after voting to go ahead with impeachment proceedings against Brazilian President Dilma Rousseff at the National Congress in Brasilia on April 11.
Credit:

A congressional committee in Brasilia has recommended that impeachment proceedings continue against President Dilma Rousseff, another bleak sign for her administration. But after one look at the committee members, you might wonder who’s in worse trouble.

On Monday, the committee voted 38-27 for impeachment proceedings. That committee includes no fewer than 37 politicians who themselves face charges of corruption or other serious crimes, according to an analysis by The Los Angeles Times. Indeed, more than half of the committee members who voted in favor of the impeachment process are being investigated for corruption.

What’s remarkable about the dramatic efforts to oust Rousseff is that, by contrast, the president has not been directly implicated in corruption for her personal financial gain. Rousseff is accused of a lot of things — from ineptitude to plain arrogance — but stealing money is not officially one of them.

Rather, she’s accused of manipulating government accounts — shifting public money around in a sort of shell game — to cover budget shortfalls, and shore up votes, in the run-up to her re-election in 2014. She has never been charged for this and says she’s done nothing wrong.

This is worth repeating: Maybe you’ve heard about Brazil’s “Car Wash” scandal, where executives and politicians skimmed millions of dollars from the national oil company, Petrobras? Rousseff so far has not been implicated in that scandal, despite serving as Petrobras’ board chair, and energy minister, at the time.

The next few days are crucial for Rousseff.

Her impeachment now moves to a full vote in the lower house of Congress, where lawmakers decide whether it goes to the senate for a possible trial. She needs at least one-third of the lower house to vote against impeachment. The vote, which could take place as soon as this weekend, looks too close to call right now. Local reporters are on constant check-ins with lawmakers to see how they’ll vote.

After all, this would only be the second time Brazil impeached a president since restoring democracy in the 1980s.

Rousseff’s supporters claim her opponents are driven by a gamut of reasons, from political pettiness to a downright “soft coup” attempt. And given the scale of graft permeating Brazil’s political class, the “fiscal pedaling” accusation seems like pretty small potatoes compared to the suspected crimes of her contemporaries.

“It is a coup because while the Brazilian Constitution allows for an impeachment it is necessary for the person to have committed what we call high crimes and misdemeanors. And President Dilma did not commit a high crime or a misdemeanor. Therefore what is happening is an attempt by some to take power by disrespecting the popular vote.”

Consider, for example, Rousseff’s deputy and the man who would take over if she’s impeached: Michel Temer.

Vice President Temer is himself accused of involvement from in an illegal ethanol-purchasing scheme. And a Supreme Court judge last week rule that Temer, too, has to face impeachment proceedings, since he was allegedly involved with the financial shenanigans Rousseff is accused of.

A recent poll suggests almost as many Brazilians support impeaching Temer as they do Rousseff — around 60 percent — according to Bloomberg.

And rather than sit out the political circus, on Monday Temer suddenly, and apparently accidentally, released a recording of a speech he was practicing for his glorious ascent to the presidency. In it, the veep speaks of “pulling together” and “unifying the country.”

The recording was just the latest twist in a bizarre journey for Brazilian politics.

Rousseff’s impeachment saga started back in December, when the speaker of lower house of Congress, Eduardo Cunha, acted on a request to open the process against the president.

Unsurprisingly, Cunha is — wait for it — suspected of corruption! He is accused of taking at least $5 million in bribes and keeping secret back accounts in Switzerland.

There’s also a rather messy economic backdrop behind this drive to force out Rousseff.

The economy is in shambles. Inflation has been in the double digits this year; despite a recent rally, the country’s currency has lost much of its value in the last two years; and the gross domestic product shrank 3.8 percent last year.

Rousseff herself is also deeply unpopular. Since narrowly winning re-election in 2014, her approval ratings quickly sank into the single digits as the economy worsened. The growing scandal at Petrobras — scheming that involved associates and went on during her tenure there — has also tainted her.

Then add the Zika crisis, a horrendous dam collapse that killed 17 people and the contaminated water venues for the Summer Olympics, for which tickets are selling more slowly usual, and you can start to understand why Brazilians are so fed up.