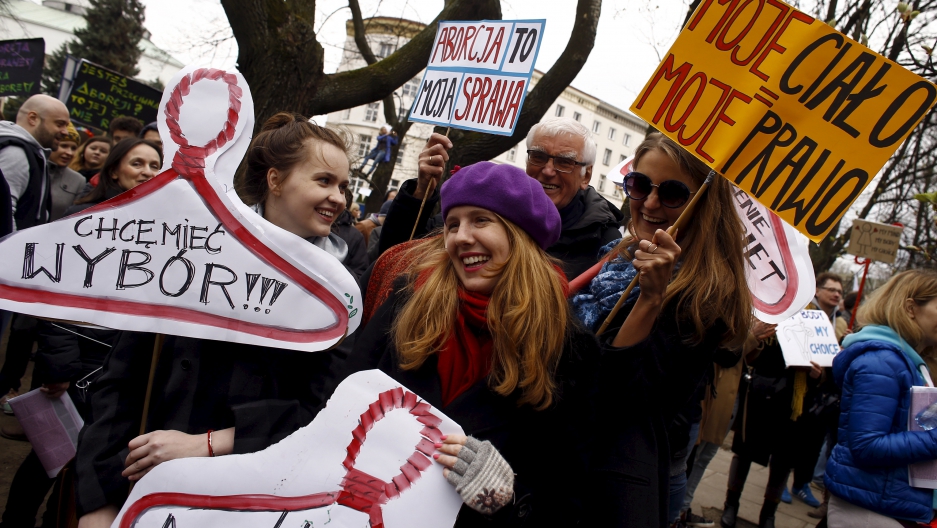 ​
People demonstrate against plans of tightening the abortion law in Warsaw, Poland on Saturday. The placards read, from left" "I want choice!!!" "Abortion is my business" and "My body=my right."
Credit:

Poland’s abortion policies are already some of the most restrictive in Europe — and now anti-abortion activists are pushing for a total ban there.

If the Polish parliament gets a chance to vote on the proposed ban, there’s a good chance it will pass. Activists on both sides of the debate agree on that. An organization called “Stop Abortion” is currently at work gathering the 100,000 signatures required for the bill to be considered.

But the current debate actually has its roots in the past — and in the United States.

In 2014, I was in Poland to report on abortion policies, and I sat down with the founder of “Stop Abortion.” Mariusz Dzierżawski met me in a concrete building in downtown Warsaw. Graphic posters used in the group’s campaigns lay folded against the wall. A plate of heart-shaped cookies sat on the table.

When I asked Dzierżawski about the tactics he used in his campaigns, his answer shocked me: “We did not create these tactics. We use tactics passed on by Gregg Cunningham.”

Gregg Cunningham isn’t Polish — he’s American. He has pioneered the use of graphic imagery in the fight against abortion. In other words, American abortion politics directly inspired the current controversy in Poland.

That connection also explained one of the strangest details of the anti-abortion photographs that circulate in Poland. Some include coins as a way to illustrate the scale of depicted fetuses. But strangely, the coins aren’t Polish złoty — they’re American dimes and quarters.

I soon discovered that the transfer of tactics isn’t restricted to anti-abortion activism. As I reported in a recent Guardian story, abortion-rights protesters are also borrowing strategies and symbols from the US.

Thousands gathered across from the Polish parliament last week, and they left coat hangers — symbolizing the dangers of illegal abortion — hanging from trees.

The question now is which of the imported tactics will have the greatest impact. Women I spoke with said that this is the biggest development in Poland’s abortion debate in 23 years. Anti-abortion campaigners have three months to gather the required signatures. In the meantime, both sides are mobilizing support wherever they can find it.

You can read Daniel’s full story about abortion in Poland here.