For all of the horror that emerged from the WWII, there were some bright spots: With the men out fighting, women were brought into the workplace.

In the mid 1950s, a visionary executive believed women could have a lasting impact on the automobile industry. Harley J. Earl, then the vice president of design at General Motors, introduced “The Damsels of Design,” a group of industrial designers.

“[Earl] really recognized before his contemporaries that women in postwar era really had a lot more buying power, and they were making a lot more decisions about the home, and kind of the car as an extension of the home” says Rebecca Veit, Designing Women columnist at the magazine Core77.

“GM’s PR department really saw a great opportunity to promote the women they were bringing in, and dubbed them ‘The Damsels of Design,’” says Veit. “From everything I’ve read, they really kind of hated the name and being called ‘The Damsels’ — they really felt that it didn’t give them a fair shake as designers.”

Four of the "Damsels” worked as industrial designers for GM-owned Frigidaire, where they helped create the Kitchen of Tomorrow, while the remaining six were tapped specifically for the General Motors Interior-Design Department. Taken together, they’re now considered the first prominent all-female design team in American history. 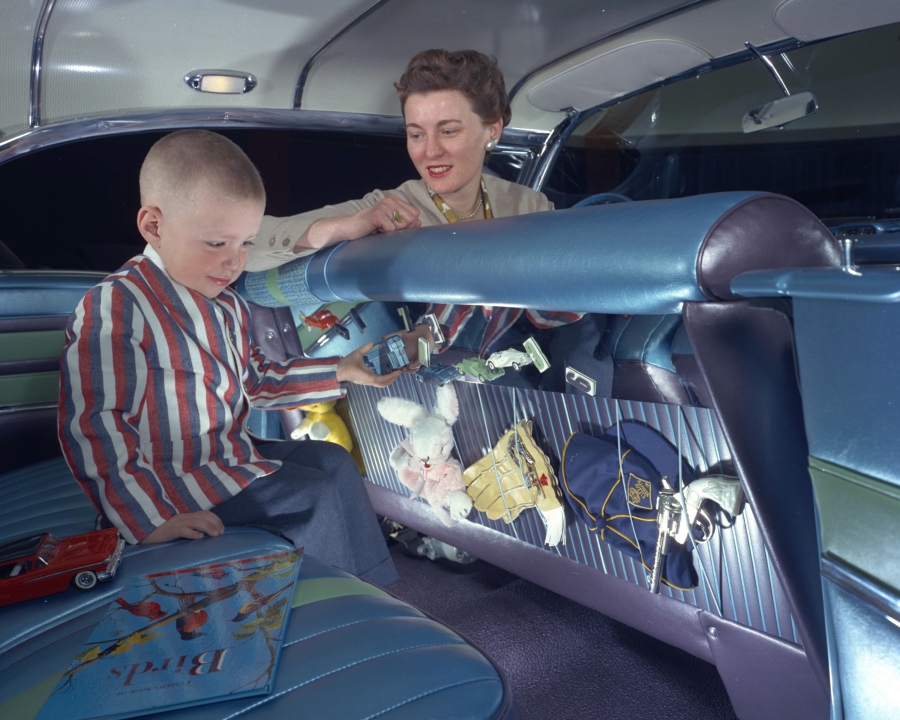 The Carousel's child-friendly backseat included storage for toys, a magnetic game board and child-proof latches that could be controlled from the dashboard.
Credit:

“They were really designing [car] interiors from the ground up,” says Veit. “The PR department at GM kind of promoted them as decorators, saying, ‘Oh, you know, they’re throwing around fabrics and choosing colors,’ but really they were doing the exact same work that the men there were doing.”

Some of the Damsels also worked on designed displays and exhibits for the GM Styling Department, which is now known as GM Design.

“One thing that GM specifically did was to promote them with what they called the ‘Feminine Autoshow,’” says Veit. “This was really a time for them to show their taste and design prowess. They designed two to three automobiles each, and really put in some interesting innovations.”

With the Corvette, the Damsels introduced the first retractable seat belt, and they also developed other innovations, like glove compartments and light-up mirrors — features that would remain in GM cars for decades to come.

“They had fun storage consoles for picnics and for umbrellas, and they also put in some new safety features,” says Veit. “They had some of the first safety latches that could be controlled on the dashboard for children in the back seat.”

Veit says the Damsels were thinking more “holistically” about automobiles and the different ways that a car would actually be used in the real world. But they weren’t the only women in the design field at the time.

“There were a lot of women in America, as well as Europe, who were designing and kind of flying under the radar either because they weren’t taken seriously, or because they were working with their husbands and they were kind of in their shadow at the time,” Veit says.

But the story of the Damsels didn’t end happily. 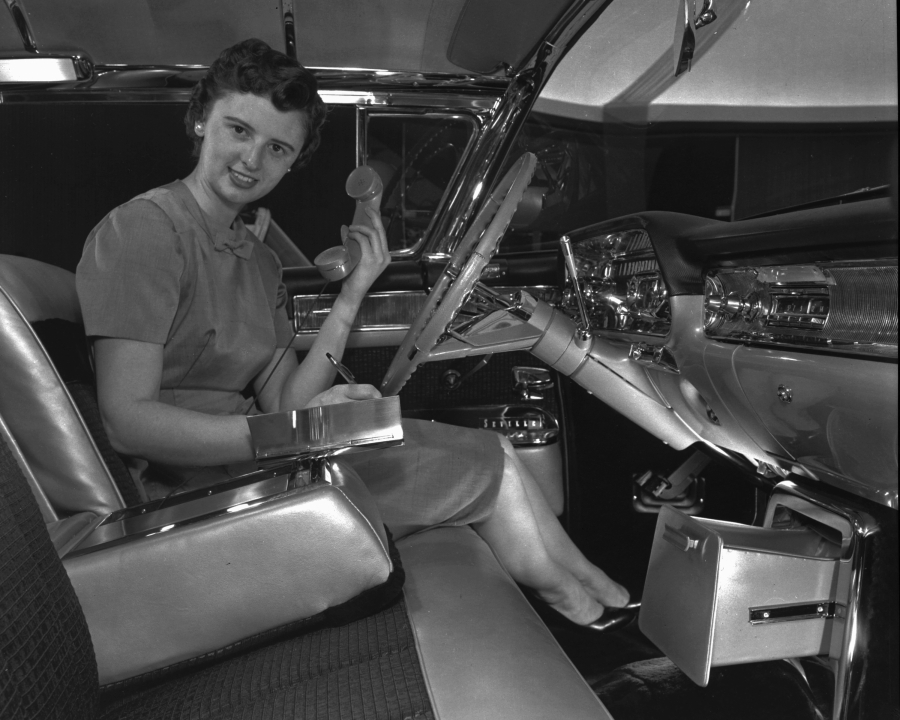 “It was kind of a brief blip, unfortunately,” Veit says. “They brought them in around 1955, and in 1958, Harley Earl retired. The man who came after him kind of famously said, ‘No women are going to stand next to my male senior designers.’ So by the early ‘60s, they were gone.”

One of the women — Suzanne Vanderbilt — did stay on at General Motors.

“She kind of tenaciously worked her way up through the ranks at GM for the next 23 years,” says Veit. “But I read an interview with her, and the interviewer asked her, ‘How many women in the early ‘70s were working at GM?’ She said, ‘There’s about one in every design studio, so six total,’ and that was the exact same number that were working on automobile design when she started in 1955. Unfortunately, there wasn’t huge progress. I think if Harley Earl had not retired in 1958, it might be a different story.”

Vanderbilt never did stop pushing the boundaries forward, even if her company wasn’t responsive. In the 1960s she developed a patent for an inflatable seatback, which allowed for a new approach in automotive back and lumbar support. GM considered her invention, but didn’t actually bring the model into production until decades later.